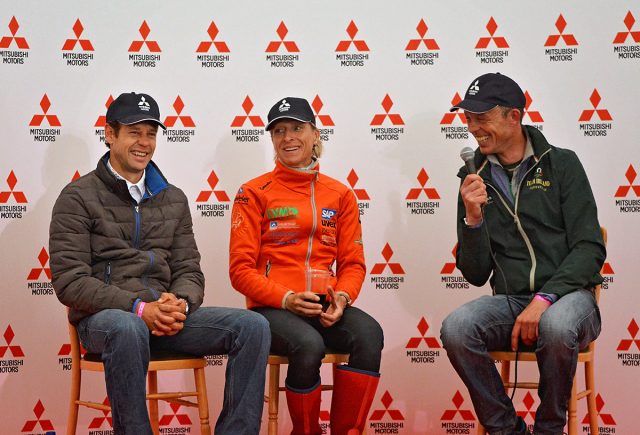 Read what the top three had to say after the conclusion of dressage at the Mitsubishi Motors Badminton Horse Trials. Click here for the full report on the thrilling dressage finale.

CHRIS BURTON: On his dressage: “He’s done good tests before, and yes I knew it was in him but I didn’t think it would happen at Badminton!”

Looking ahead to cross country: “At four-star the time is always difficult. I think Eric Winter has done a great job; I really do. It’s the sort of course where you’re scared about every fence, but I think you can see a clear way through each fence which I think is really clever, and yet I’m sure there’ll be plenty of problems caused all round the course.”

INGRID KLIMKE finished second at Badminton two years ago. Does she think she go one better this year? “For sure, that’s why I’m here. That’s always the big dream and the big hope we riders have, but I’m not the only one who would love to win the trophy!

“I’m really happy because Bobby did a wonderful job, and he’s very fit and healthy and he has enough experience now being 13 years old and has done enough big courses and so I totally trust him and really look forward to tomorrow.”

Ingrid’s plans for cross country: “Plan A is to go straight everywhere and really try to ride inside the time for sure. Luckily I’m number 91 so I have enough time to watch all the other riders and make my plan and then you have an idea if maybe you have to change it, but normally I would really like to go straight.”

On being inspired by other riders: “Today I was really impressed by Jonty because he was right in front of me and the crowd was so full of cheering that my horse was quite nervous coming in and I waited quite long until he was nearly out and the clapping was over, and so I realised that it was a very good round, and now I had to really try to make Bobby quiet and make him feel his very best.

“Definitely this is not a dressage competition for sure, and the scores are so close all together. Chris Bartle would say throw the dressage sheet away, tomorrow is another day and then we will see who is in the lead!”

JONTY EVANS on his test on Cooley Rorkes Drift: “He was great and I’m delighted with him because he tried so hard and it’s really fabulous to do it in the right place.

“I looked up in the walk and I think it was 8, 8, 7 and I think if you see 4, 4, 5 at that point you maybe go, ‘Oh dear,’ so I saw that and thought, ‘well at least that’s reasonably good, if I can just keep my chin up and keep going.’ I’ve had some great help from Ian Woodhead and Gareth Hughes, and we’ve worked very, very hard on the horse through the winter since Rio and we know that he’ll turn up on the day.”

On Saturday’s cross country: “He generally loves the cross country; he gallops and he jumps. We’ve worked hard on that phase since Rio so I’m looking forward to it.”