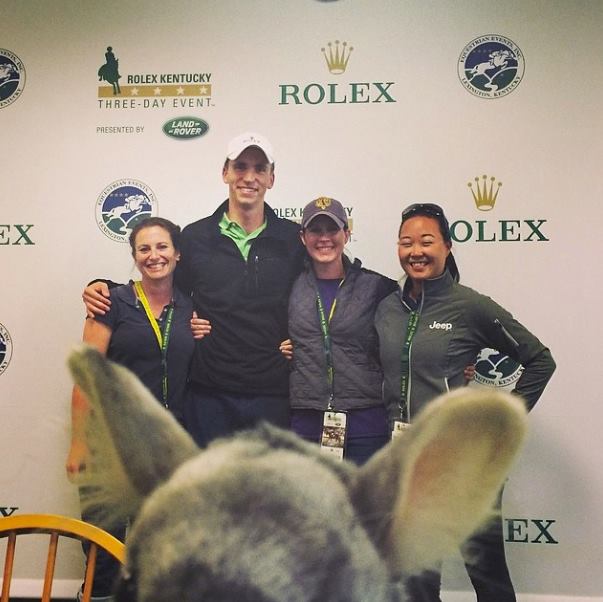 The EN team at Rolex this year: Leslie, John, Jenni, Sally ... and Chinch.

Today at 8 p.m. EST, we will once again start the journey to finding our next fabulous EN writer. While it is not an easy process to go through (the nerves and obsessive compulsive checking of email is just the worst, I tell you), it was well worth it in the end for me. If you’re on the fence about sending in an entry today, allow me to try to persuade you to jump.

I entered the Blogger Contest every year since its inception with high hopes of putting my writing skills to good use. For the first two years, it was not meant to be. Recently, I pulled up my entry for the first year and quickly realized that John was smart not to pick me that year. I kept reading Eventing Nation each morning (and compulsively throughout the rest of the day) to get a feel for the tone of the site and the voice of the writers.

I began to devour information on the riders and horses like I was cramming for an exam. Following eventing was not foreign to me, but I sure as heck couldn’t rattle off the top 10 from the last Rolex or the alternates for the last Olympic team (ok, maybe I still can’t do that). So I became more of a student of the sport, learning the ins and outs of the U.S. team and picking out personal favorite horses to follow.

By the time the contest came around last year, I felt I had a good handle on what the editors were looking for, so I took a deep breath and started writing. I wrote my entries from my computer at my office job, unbeknownst to my boss of course, and sent them off while crossing my fingers and toes that they would be noticed out of what was sure to be a sea of entries.

Lo and behold, I got an email from Jenni saying I had made it through to the next round. The emails kept coming, and eventually I was told that I had made it to the finals and that my work would be published on EN regardless of the final outcome of the contest. While the lovely Erin Critz took home the top honors, I still found myself welcomed into the group of writers (and chinchillas) that run this website with open arms.

From there, it was a whirlwind. I began writing in earnest, always hunting for more stories to write about and more opportunities to grow. Before I knew it, I was hopping on a plane to Texas to cover my first event: the 2013 American Eventing Championships.

In November 2013, my boyfriend and I decided to move from St. Louis to Kansas City so that he could pursue more work opportunities in his hometown. I thought long and hard about what to do as far as my job was concerned. I had a few conversations with John about the potential of taking on a more full-time position, but there wasn’t an opening for me at the time.

Something was telling me to take a leap of faith, though. Writing and horses are my two biggest passions in life, and the chance to combine them into a sustainable career is something I honestly had virtually given up on. Still, something told me to trust my instincts. So, I packed my bags, quit my office job and headed to Kansas City in January of this year.

After about a month living in Kansas City, I began to take on more responsibility with EN. Editing the website on the weekends, traveling to cover events, managing Bloggers Row, and handling many different weekly and monthly columns are just a few of the things I’ve taken on since I moved. More quickly than I would have ever imagined, my dream became a reality, and I was able to officially say that I was doing exactly what I wanted to do with my life.

When people ask me how I got involved with EN, I always use the word “whirlwind.” This journey has been nothing short of mind-blowing, and the support I have gained from this wonderful staff and the people I’ve met, who are nothing short of inspirational, are only two reasons why this is literally the best job in the world.

I hope my story can be an inspiration to someone out there who is debating whether or not they should enter this contest. Perhaps you did not make it in the past contests, or maybe you think your writing isn’t up to par. Whatever your reason is, throw it to the wind and make a leap. Trust me, if John can get away with writing on this site having apparently never consulted a grammar book in his life, so can you.

Take a leap of faith. Send us your contest entries. You may not get to interview Boyd in his underpants (sorry, Boyd!), but you may just be able to say that you work for the best website in the world, and what better prize is there than that?

For more information and guidelines on the Blogger Contest, click here. Entries are due at 8 p.m. EST tonight.