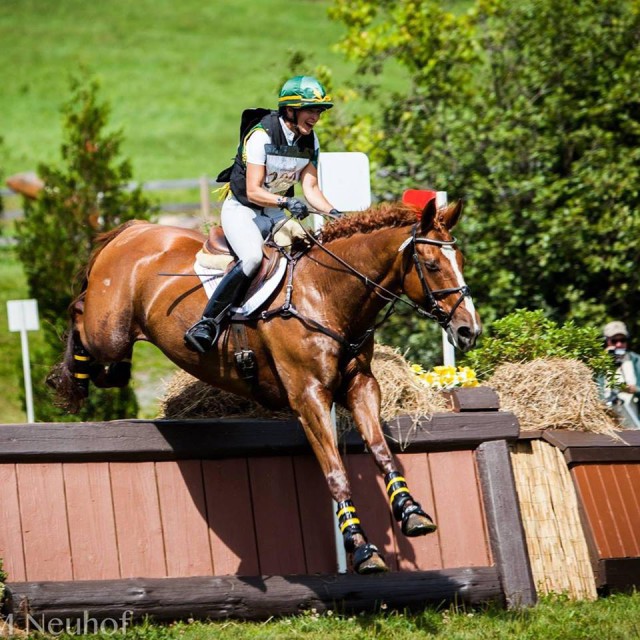 Vinnie and ME in our fist CIC, over the corner, one jump away from finishing! Photo: Ashley Neuhof/AMN Photography

This past weekend I reached my biggest goal to date: I completed my very first CIC*, at The GMHA Festival of Eventing, in gorgeous South Woodstock VT, and boy was this outing a major learning experience for me!

Saturday 7:30 am: So there I am. Trailer parked. Horse happily munching away on the trailer. Passport in hand. Confused and possibly, but not limited to, an incredibly anxious and nervous look printed across my face. I grab Theatre Royal, aka, Vinnie, and quickly brush any excess dirt off his already shiny and primped body. Throw the bridle tag on his halter and head over to where I think the vets are waiting for us.

“Hi, we’ll be right with you,” the vets say. “I can’t believe we have someone waiting for us for a change!” they say while they smirk and casually walk over to me, so nonchalant, like to them this is another day at the office. But to me, this is it. The moment I’ve been waiting for. I spent literally months getting Vin’s passport renewed and shots and boosters up to date. Was not as simple as 1,2,3, but I got it done!

One of the vet’s starts running the weird little micro-chip mechanism across Vin’s neck for a while and nothing comes through. DUH, I think to myself! “I am so sorry, I forgot to tell you I was told by the passport people at the USEF that Vinnie is exempt from this microchip rule because I believe he was grandfathered in as he competed internationally in 2007,” as I am saying these words I am desperately hoping this information is accurate and that I can continue on with my event. “Yep, looks like you’re all set,” one of the vets say. “Just jog him down there and back please.”

I cluck and pull on Vinnie trying to get him to trot which is not his favorite thing to do. Vin is one casual fellow and prefers to be standing still while stuffing his face with grass! So there I am pulling my 16.3 ISH along, like I’m a little kid trying to get her pony to trot! Was sort of hilarious! The vet was amazingly nice and educated me for future events. He told me I was good to go and to have a fantastic weekend. First in barns and first jog done…CHECK!

Saturday midday: There I am putting the final touches on Vinnie before making our FEI dressage test debut! I had my shadbelly, my dressage coach, my buddy who is a photographer, and I assumed we were good to go! I knew my test in and out. We had practiced all the movements in various schools and in lessons. We have also been placing quite high in dressage all summer so I felt confident. I thought Vin and I looked amazing – how absolutely thrilling to wear a shadbelly! This is when dressage gets exciting! Large arena, perfect footing, and more than one judge!

I start warming up and the unfamiliar dressage nerves start creeping in. Normally I am anything but nervous for dressage, but there I was, feeling tense and anxious. I don’t know if I had too much time or not enough time, but before I knew it, we were meant to be in the ring. “Please leave your whip with us, thank you,” say the officials checking me in. WHAT? NO WHIP IN DRESSAGE? DID I MISS THAT IN THE FINE PRINT? Damn! I should have studied the rule book more closely. 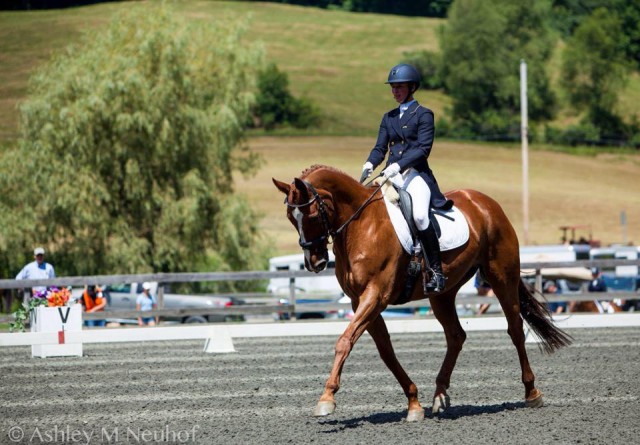 Vinnie and me in our first ever CIC test! Photo: Ashley Neuhof/AMN Photography

I don’t know if it was the overall atmosphere, the expectations I had for Vinnie and myself, the no whip rule, or a culmination of all of the above, but I basically went into the daunting sandbox and did not ride to my best ability, or at the level I know I am capable of riding. Vinnie was super and did what he was told, but no more and no less! He is a smart guy and goes according to the way you ride him. He will be magnificent if you are on it and mediocre if you don’t rise to the occasion. All in all, I had two mishaps in the counter canter which landed us a couple big FAT and disappointing 4’s. And some of our transitions were a bit late. WHOOPS! Our test wasn’t horrible by any means, but we did not perform to our best ability, or at least I did not!

Saturday 5:30pm: I figured at this point I had less pressure on myself. We were sitting in seventh place in the CIC* heading into show jumping with almost nothing to lose. Many times with Vinnie, I have gone into showjumping either in first or in second place and have felt serious pressure. Even though we have done well together, it is still daunting! Of course wouldn’t you know it, Buck Davidson is the first to go in the CIC and then me. SERIOUSLY? I have to follow Buck? The guy who competes a gazillion horses and has been around the hardest courses in the world?

Ah well, here goes nothing! I was as ready as I was ever going to be. Someone told me before I went into the ring I had the most evil and most defiant expression written across my face. And that’s how I rode my course! I have to go to this place mentally where I am sort of a badass, motorcycle driver, risk taker who doesn’t give a damn kind a gal, otherwise fear takes over and I crumble.

We went in and despite one rail and one stupid decision I PERSONALLY made on a very challenging 5 stride to one stride line, Vinnie was amazing and was right there with me. I heard nothing and saw nothing when I entered the ring, but after the last in and out, I saw everyone and heard everyone cheering for us, and I have never been more proud or felt more amazing after a show jumping round. We did it! It wasn’t a tiny course nor was it a piece of cake!

Sunday 11:00 am, 30 minutes before XC! At this point my heart is racing, sweat rolling off my face, heart continues to pound. All my friends and family keep clear as they know I literally cannot communicate or make small talk before cross country. Vinnie is ready to go. Studs in, braids out, boots on, tack on. He knows I know. I know he knows. I was, no joke, dry heaving in the trailer just minutes before I needed to get on. I was ridiculously nervous even though I never wanted anything more in my life! We were prepared and Vinnie has so much experience, though the butterflies would not leave me alone! 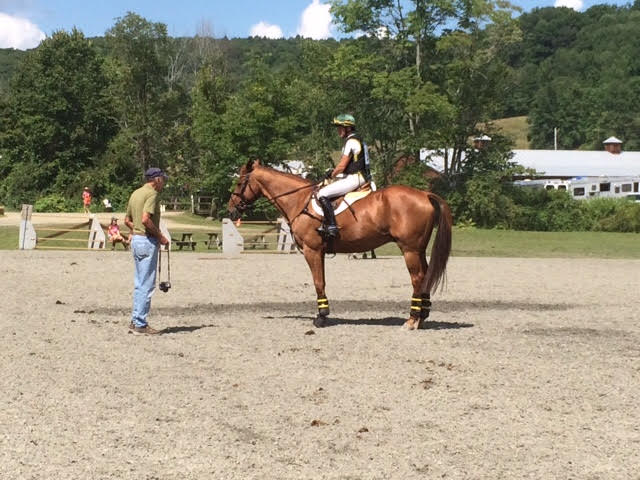 I get on and head over to the cross country warm up. Body almost trembling. Nerves rising. Heart still pounding. I can hear my breathing and I can hear Vinnie’s footfall. I start warming up and Vinnie feels super! Denny is there warming me up and gives me the thumbs up. The starter says “5, 4, 3, 2,1…have a great ride, good luck!” Andddddd we’re off like a canon to the first jump. All of a sudden Vinnie makes the hardest line on course feel like a gymnastics line.

Phew! Before I know it we are dropping into water, and on a unintentional long rein head to the corner after the water, and he was foot perfect, locking onto that corner like nobody’s business! That was the moment I knew I was almost going to cry. We were about to go clean, even with one last fence to go on course. That moment on course was the most amazing thing that has ever happened to me. And then we did it! We completed our first CIC* together and I could not have been more elated, more ecstatic, or more thrilled!

Even though I did not make this horse, train this horse, nor can I take any credit for his overall amazingness, I can take credit for the unique relationship that is true to me and to Vinnie. Not his owner and him, and not his former upper-level rider in England, but ME and Vinnie as a team. We have our own relationship and have developed a partnership over time, and I absolutely adore this big, friendly Irish Sport Horse!

He is one of a kind, and it would have not mattered if we placed second or dead last in the CIC, the feeling of accomplishing what we did together is unlike anything I have ever been a part of. Thank you EVERYONE who came and cheered us on. The support means the world to me! This horse has allowed me to move forward with my riding and has made me feel like any goals are attainable and that dreams really can come true! 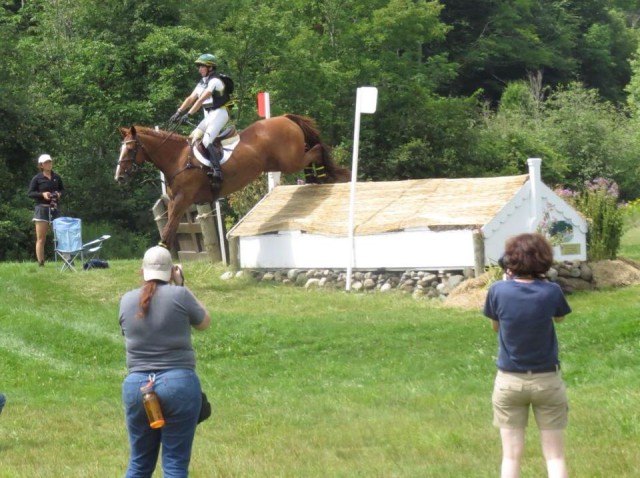 Weeeeee! Over the white barn we go! Photo: Denny Emerson