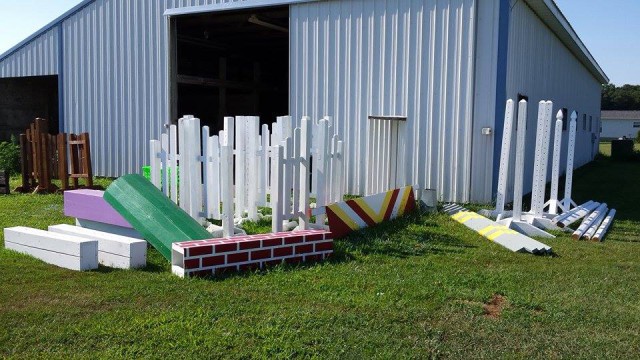 A jump course waiting for a show.

I recently managed a small combined test at a popular equestrian park, known for its recognized horse trials. I think this was quite possibly one of the most physically demanding things I’ve done in the past twenty years, because of those darn show jumps. I built a whole course in about three weeks, set them up at home, took them down, loaded them on my trailer, took the trailer to the park the night before the show.

Once we got the show underway in the morning with dressage (a feat in itself) the next endeavor was to corral a good bunch of great volunteers, unload the trailer, and set the course at lunch time. My bruises from smacking myself with rails, cups, and various parts of standards are just now starting to lose that angry purple look. And, once the show concluded, we pulled the trailer in, and broke it down, and loaded it back up. When I got home that night I literally cried with exhaustion. There was no way I’d ever do THAT again!

The trailer has sat for a week, fully loaded, in the yard. Yesterday, I took a couple of standards and poles off it and set them aside. Today, I unloaded a few more standards and poles and by the end of the week, I’m going to have all off the trailer. I look at it and can’t believe I put all those on there (with help!) and got that show off the ground working a full-time-plus overtime job, riding two horses and running a small farm. There is no spare time.

If it were not for great friends who went above and beyond to help me — run warm-up, set fences, raise the fences, load and unload, or even just give advice — it could not have been accomplished. While some drank wine and congratulated themselves, my friends were grunting and lifting standards after a long hot day in the sun, and for that I just can’t thank them enough.

We share a vision of the world, I guess, and when you suffer through a hard job with a group of like-minded folks, you get the feeling together you can manage just about anything.

There is no way I am going to do another combined test, I said to myself all week. After being fairly well consumed by the show for the better part of a month, I looked around and saw a dirty house and barn, neglected horses and dogs and family, a pretty empty checking account, but a sense of great accomplishment.

So what did I do the following weekend? Volunteered to help at a horse trial, of course, managed by a friend who helped me at my combined test. Of course. And, we were talking about new dates for next year. But I did not have to load any show jumps, so I don’t think I’m fully crazy. Just partially.