As you might have read in my previous articles or followed on my Instagram (@tinitinyeventing !), I have been wanting to go to the Young Rider Championships for a long time. Like five years. It’s been a while. But I realized that I have never really explained why this is so important to me. This seemed like an appropriate time to elaborate on my driving dream, especially since I’ve been talking about it for a third of my life.

Before I can go into NAJYRC, it is important to gain some background on the barn I have grown up in. I started riding with Jordan Linstedt when I was 11. I had read about Young Riders one year prior, and had my heart set.

So from 11-12 I battled with a naughty bucking pony, and watched awestruck at the Novice/Training riders in my barn, who would soon become Training/Preliminary riders. I was completely amazed. I used to sit and watch their jump lessons, videotaping just so I could rewatch them at home. While I couldn’t get my pony to calmly jump a Novice oxer, they flew over jumps I could only dream of piloting a horse to. In short, I idolized these girls (you guys probably know who you are!)

Midway through my first summer with Jordan I got to jump this rolltop we have. It’s just over 3 feet tall, probably the width of a general ascending oxer, and is painted to look like an American flag. But to 11-year-old me, it might as well have been the size of the world. Jumping that rolltop was a big deal, because it was what the OLDER GIRLS jumped. That might have been one of the best days of my summer.

Fast forward to September and I go to watch my first three day at Aspen Farms. Jordan was running RevitaVet Capato in his first Advanced, so we came out to cheer her on. I was once again awestruck watching them fly over cross country, as well as watching the older girls in my barn compete their respective horses, and I made a little mental note that one day I would do the same thing.

A year passes and I sell my mean pony and purchase a Beginner Novice packer to finally compete on. This meant that I watched the same girls on a regular basis. One show that really stuck out to me was Whidbey Island H.T., watching the Preliminary go. Two girls were competing from my barn, and I was completely entranced. I vividly remember watching them jump a log on the top of a hill, and at the time it was the biggest hill I’d ever seen a horse go up. I desperately wanted to do what they were doing. So badly I wanted to fly as they did; I was assured it would come in time.

That same summer one of the girls I idolized allowed me to ride her Preliminary horse around for a bit. It was maybe 15 minutes of trot and canter but I swear I never wanted to get off that horse. It was the third time I promised that one day I would ride like them. 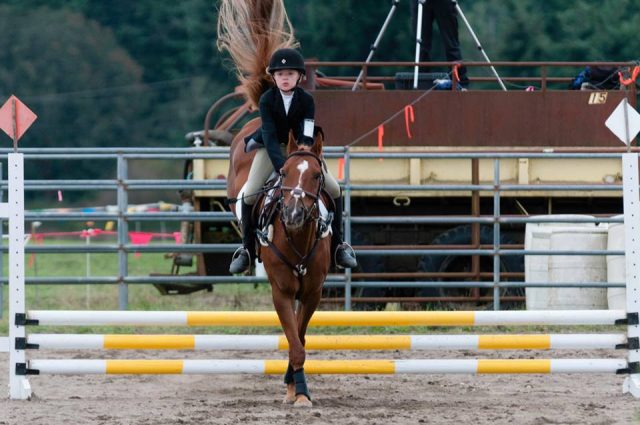 From my first show with a bucking pony, and Novice seeming a long way away …

Now we jump ahead two years. I am at Aspen Farms again, competing in my first Training. I’m 12, about to turn 13. I’ve upgraded to a bigger horse, and I am desperately excited to jump bigger jumps. Another one of the girls I desperately idolize is doing her first Preliminary. I remember hurrying out to watch, full of anxious excitement and wonder. The picture of her jumping through the coffin is still vivid in my memory. That was the final time I internally said a promise that one I day I would do that too.

Those girls were so nice to me. They showed me the ropes of eventing, gave me something to strive for, and were the best idols I could have had the opportunity to look up too. They were inclusive, caring, and mentors for me. Eventually, they all left for college, and that gave me some time to ride and grow without really noticing how much time was passing. It has been a while since I last saw some of them, others have kept in intermittent touch, and I myself have moved up to Preliminary.

When I look back at my journey to where I am today, I can clearly recognize the impression those teenagers left on me, and the guidance they offered. Even years after I last watched them ride, the awe of my 11-year-old self has stayed with me. I will never forget how supportive those girls were to me, and what an amazing job they did in showing me how to lead. I have always wanted to fill the shoes of the girls before me, and I am not sure I’ll ever reach that point. But it certainly doesn’t hurt to try.

So how does this connect to the Young Rider Championships? I guess for me, NAJYRC is a benchmark. A way to stop and say, “look where I am now!”, but also the fulfillment of a long goal — the end of a chapter. Going to NAJYRC would be the end of my career as a kid trying to chase after the older girls, and the beginning of attempting to BE one of the older girls I idolized when I was younger. Of course, I am always trying to emulate what I watched in their leadership, especially now that I have moved into the “upper levels.”

Young Riders has always just been a title to me. Something far away, distant, a dream that every competitive young rider has. Now it’s closer than ever before, and I’ve come to evaluate why it is so important to me. NAJYRC would be the culmination of every stiff-necked dressage test, every almost-too-fast cross country round, and every nerve-wracking-almost-puking show jump ridden until now. It would prove to myself that in some way I have gotten better, I have learned something, and I can start to be the role model I have always admired.

That isn’t meant to sound cocky or entitled, but there is something credible and viable in competing at Young Riders, there’s a certain magic to the name that I feel people give a level of appreciation for. If I am able to add that title to my list of competitions one day, I want to be doing things the right way. I don’t want to spoil that magic with sloppy riding or self-centeredness, because NAJYRC wouldn’t be about the show, or myself, or even my dreams. NAJYRC would honestly be about proving that the past five years haven’t been a waste of wishing.

Above all things, I strive for this goal and work towards it to fuel the dream and fire I know others have. People have always told me “you never know who is watching!” and I take that to heart. Maybe no one is watching, but maybe the world is. And when the world stops to look, I want to make a good impression. I ride, I compete, I train and I dream for those watching me the way I watched the girls in front of me.

My personal goal to replicate the mentorship I was given by older riders within my barn. I want to someday be the kind of leader for the younger riders (namely within my own barn) that I had the opportunity of learning from years ago. I can only hope I am giving them the same guidance I was given half a decade ago. 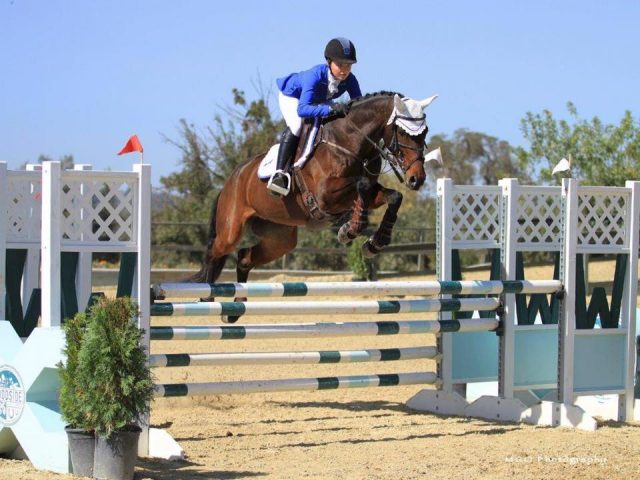 … to my most recent show — four years changes a lot! None of it would have been possible without the support and comradery my teammates provided. Photos courtesy of Madelyn Floyd.

So there you have it, the reason I so desperately want to qualify and hopefully someday compete at the Young Rider Championships. In many ways, the reasons why I am trying to get to NAJYRC reflect the reasons I ride, and the reasons I strive to be the best I can be. That is all riding really is though, trying to be the best you can be. Every ride I take in that direction is for the younger ones that want it, too.

I advise everyone reading this to think similarly, because whether you realize it or not, someone’s always watching you ride. You might not notice it, but the world stops to watch everyone. We can only pray it stops to watch at the right time. Cheers to everyone trying to qualify for the 2018 teams, and cheers to the riders we all grew up watching.