Kim Meier's eventing career spanned from 1969 to 2007, and from the 1980s on, she rode mostly homebreds. Early on in her career she rode with Denny Emerson and then mainly Ralph Hill and Donnan Sharp Jones. She made six Advanced horses, started all of them, broke five of them and bred four of them. This is her Rolex Rookie story. 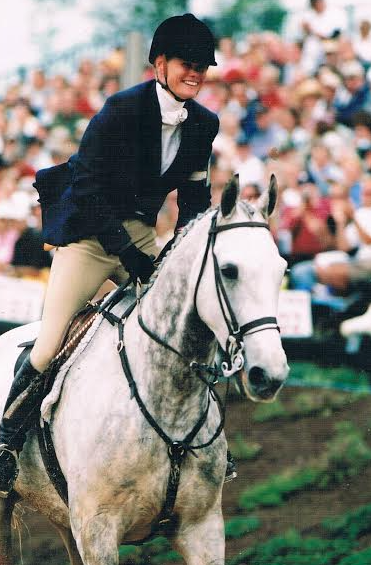 Over a decade ago, Rolex Rookies were not featured, and that was a shame, because my Test Run had a great story. I miss him very much, and when Rolex comes around, I think about him even more and relive the magical week we had there.

Test Run, AKA Merle, was by Test Pilot, a son of Babamist and a grandson of Epic Win. I rode his great grandmother, Charisma, in my first Rolex CCI3*, 20 years earlier, and his grand uncle Chobalt, son of Charisma, had placed 8th in 1997 and 11th in 1998 in the CCI3*. I, in fact, had hardly competed anything that wasn’t related to Charisma since the late 80s. So Merle had some history in his blood at Kentucky.

I first met Merle when he was a few minutes old. I was his first rider, aimed him at his first jump and competed him exclusively. I did loan him to my good friend Molly Sorge the winter of his 3-year-old year, and we refer to her as his surrogate mother. He did Training as a 4-year-old and moved up a level a year, running his first Advanced when he was 7, shortly before placing fourth at Bromont CCI2* in 2002.

The next year he did two CCI3* at Fair Hill and Foxhall. Being very sound and never missing a competition put him right in line for Rolex in 2004 as a 9-year-old. Neither of us had ever done a CCI4*. Of course, Molly would be his groom.

He did an obedient albeit green dressage, which was our only goal in that phase. That was the last year Kentucky ran a full old format endurance day, as well as a new format division for those who were qualified for the Olympics. We were in the first division, thank goodness.

It was my tradition to tell him the course before hand, including where to turn and where the minute markers were. I told him he had to remember everything I had taught him all at once, today. I am positive he understood me.

After a half dozen trips to the port-a-let, it was time to get on. I can’t imagine not doing old format. I love the relaxation of hacking out, and the kick in the ass for courage sake galloping fast. It sets the whole tone.

The serenity comes to an end as you see the 10 minute box ahead. Reluctantly, I handed Merle over to Molly as she ordered me to “drink something.” Having done that, I desperately wanted to cool him out myself or get on and ride, but watching was no good. I was not nervous, I just wanted it. I wanted it bad.

With all the people lining the ropes, clustered at the fences you would think you could hear the noise. Personally, I couldn’t. Only after the fence has been jumped does the crowd’s roar get to you, and allow you to crack a smile as you smack your horse on the neck in praise. 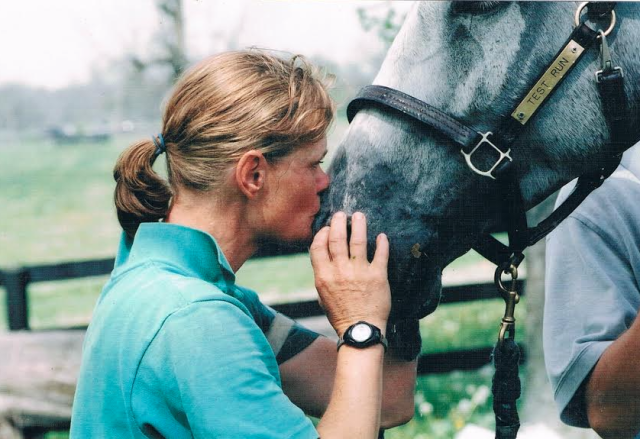 Merle and I had never been more in sync. We didn’t argue about left-hand turns, I didn’t pick (maybe once early on) and if he saw an awkward question, the wheels upstairs just turned faster. It was a dream sequence, the kind you don’t want to end, but when it did you realized you were only two seconds over, so your dream had come true.

On Sunday I left my demons in the warm-up area when I missed at a big oxer and sent a handful of people running for their lives. No one had had a double clear round yet but somehow I knew we could do it. We galloped forward and never missed a distance, never got hollow, never got flat. And until then, had never signed an autograph.

We were 10th, .8 added to our dressage score, winner of the Bank One Trophy for leading owner/rider, and to top it off the head vet came up to me and said I was one point off Best Conditioned. We posed with our trophy, Merle’s ears regally up, me grinning ear to ear. What magic.

Driving home I called every person I knew and gave them the news, and that there would be a two-hour special on a major network on such a such a date and time, and please watch it because I thought top 10 would get at least a minute or two or part of a jump round.

It was starting to sink in on the way home what we had accomplished. Molly had even made me go up and inquire what I had to do to go to Burghley that fall. She reminded me that I had once said there was no reason to go to Europe unless I had done all the events in the U.S. well, and now that I had kicked quite a few butts here it was time to go there.

I received an unexpected phone call from a popular event announcer, a friend, who told me that he really hoped my story was played up on the TV special because I was really the Cinderella tale of that week. He had been announcing our results for six years and knew I had bred him and how phenomenal it was to produce such an outstanding first four-star.

I felt so honored that he would even think to call and got even more excited about the TV show. When we hung up, I just giggled with amazement that other people had noticed us.

When the show came on, there was a split second glance of Merle over a stadium fence, and then another of his dappled gray legs trotting along in the warm-up, and we were only in the preview! As it went on, there were long passages of Mr. Super Coach warming up his oh so rich student. The coach, an Olympian, had only placed one above me, and his student far below me.

Time was running out, and at the end the scoreboards were highlighted with the names and placings of everyone, except, except … 8th and 10th place? Really? The only two riders without big-time sponsors virtually eliminated from sight. I was so embarrassed that I had told everyone to watch me and there was no evidence I was even there.

I was pretty hurt. It wasn’t a very nice thing to do. Being an underdog is OK because of the elation when you finally break loose. Eventually the high stayed but there will always be that annoying undercurrent, the only thing that was wrong with the most perfect week I shared with Merle.