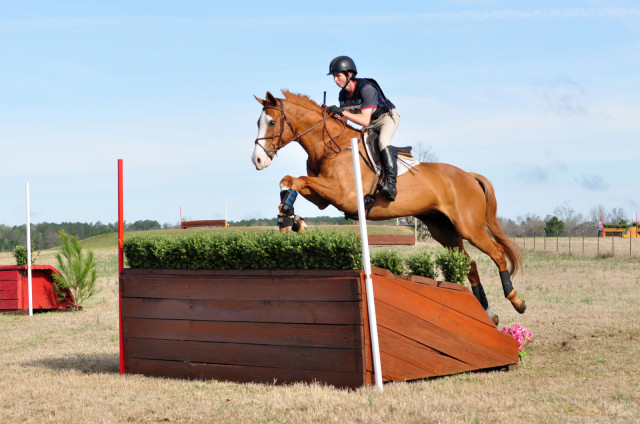 If you were out at Pine Top Spring Horse Trials this past weekend, you might have seen a certain famous chestnut with a familiar big blaze and wild eye galloping around the cross country course. Indeed, Neville Bardos is officially back in action since returning to work last November after a long hiatus.

Neville completed his second horse trials after the two-year break at Pine Top, finishing 11th in his Training level division with Windurra rider Mike Pendleton in the irons. While the jumps were much smaller than the World Equestrian Games veteran is used to seeing, the look on Neville’s face said it all:

Boyd Martin, who rode Neville to top-10 finishes at WEG, Burghley and Rolex, said while he’s not sure what the future holds for the 16-year-old off-track Thoroughbred gelding, the Windurra team and syndicate owners are thrilled to see him back out and enjoying himself.

“To be honest I’ve forced myself not to school him too much because it’s too tempting to put the jumps up and get him firing again,” Boyd said. “Lucky for me, I’ve got a very impressive young rider working for me in Mike.”

Mike, 21, has worked for Boyd and Silva Martin since January 2013 when their former barn manager Lindsey Taylor called Kiki Osbourne and asked if she could recommend a working student to join the Windurra team.

Mike worked at Cedar Creek Stables in Staunton, Virginia, and rode with Kiki at the time. When she told him about the opening with Boyd and Silva, Mike packed his bags and never looked back.

He’s ridden a number of horses for Boyd and Silva over the years, developing a knack for working with the hotter ones. Mike recently acquired the ride on HH Lancaster, an 8-year-old Canadian Sport Horse gelding owned by Ron and Densey Juvonen and Justina and Art Dodge, who is currently going Training level.

But of all the amazing horses he’s had the chance to ride while working for Boyd and Silva — from four-star eventers to Grand Prix dressage stars — Mike said riding Neville is in a class of its own. 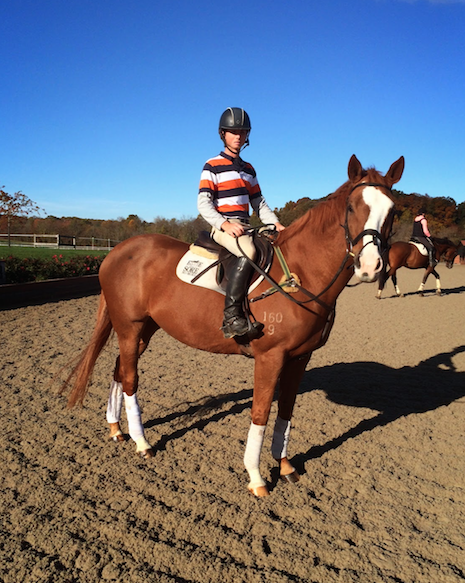 “It’s an amazing opportunity to learn from a horse that knows way more than me, which is something I’ve never had before,” Mike said. “I always have had green horses, and they’ve gone up the levels with me.”

Mike and Neville competed in their first competition together in January at Full Gallop, when the horse romped around Novice to finish in second place on a score of 33.7. They bumped up to Training level this past weekend, and Mike said he’s trying to learn all he can from the horse while he has this opportunity.

“He was having a good time out there,” Mike said. “He takes care of me and looks after me when I make mistakes. It’s a great chance for him to take the reins when I’m wrong so I can learn from him. He loves being back in the ring and back in the game.”

Boyd said he’s grateful Mike and Neville have gotten along so well, and Mike has done virtually all of the work in getting the horse fit and back to competing. “Mike is such a hard worker and an asset to our team,” Boyd said. “He’s done a superb job with Neville; he’s a quiet rider, which has been very successful with Neville when he gets a bit wild.”

What’s next for Neville?

There are no definitive plans for the horse at this time — Mike said Boyd usually only gives him a week’s advance notice when it’s time to compete! — and the goal remains to keep him happy and continue getting him more fit. Mike said Neville is just starting some slow canter work now and continues to feel great.

“The future is still a little bit unclear with Neville, but it’s awesome having him back competing,” Boyd said. “He’s an absolute legend at our place. He’s getting the royal treatment as if he’s going to an international event, even though it’s only been a Novice or Training horse trials.”

Boyd said the Neville Bardos Syndicate is very supportive of whatever direction the horse’s future takes, and several of the syndicate members were out at Pine Top this past weekend to watch the horse go.

Mike said he has no plans to leave Boyd and Silva’s program for the foreseeable future, so as long as all continues to go well for Neville, we can look forward to continue seeing them out at the lower levels. “I’m going to stay with them as long as I can — until I know as much as I can get out of it, and that’s going to be awhile,” Mike said. “They’re not going to get rid of me anytime soon.”

An update on Otis Barbotiere

The future is also up in the air for another of Boyd’s four-star horses, as Otis Barbotiere is currently down in Palm Beach, Florida, being tried as a jumper mount for a young rider.

After a long hiatus following an injury at the 2012 London Olympics, Otis, a 13-year-old Selle Francais gelding, returned to competing last year and completed Luhmühlen, but Boyd said he’s unsure if he wants to push the horse for one more four-star.

“It’s a bit of a tough decision of whether to go for one more four-star or change his career to something less strenuous,” Boyd said. “I think he would have a good future down in Palm Beach. If that suits him, we’d enjoy watching him compete there.” If the current deal goes through, Otis would be leased to the young rider, with the Otis Barbotiere Syndicate retaining ownership.

This would be the second of Boyd’s four-star horses to end up on a new career path down in Florida, as he sold Trading Aces, who competed on the U.S. WEG team last year with Phillip Dutton, as an equitation horse just last week.

“With these older horses that aren’t quite up to four-stars but are still very good jumpers, they’re well suited to amateurs or young riders in a new career because they’re quiet and very experienced,” Boyd said.