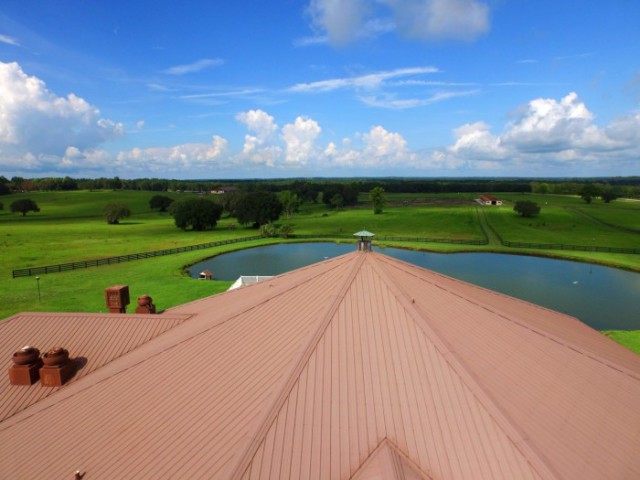 Overlooking the Ocala Jockey Club clubhouse and the site of one of the water complexes for the cross country course. Photo courtesy of Equiventures.

It’s an exciting time for the team that’s bringing eventing to the 950-acre Ocala Jockey Club property in Reddick, Florida, as the FEI has approved a new CIC3*, CCI2* and CCI* event to be held at the facility on Nov. 24-27, 2016, over Thanksgiving weekend next year.

Equiventures CEO Richard Trayford, who is spearheading the project alongside Ocala Jockey Club owners Erik and Pavla Nygaard, said they strategically wanted that holiday date for a reason: to host a showcase event that will attract people on a weekend when families are already out and about.

“We deliberately wanted to host the event around Thanksgiving to capture that Black Friday urge to rush out and do Christmas shopping and be together as a family,” Richard said. “You have your Thanksgiving dinner, and then then you’re looking for something active to do. We’ll offer fabulous shopping and entertainment with the goal of getting a good crowd for the final event of the season.”

Equiventures announced in August that the Ocala Jockey Club property will be used to expand the popular Ocala Eventing Series, which title sponsor Ocala Horse Properties doubled financial support for this year. With the Ocala Jockey Club also being approved to run a CIC3* next year, Richard said it’s a big step toward creating a world-class event that will attract riders from across the globe.

“We’ve got beautiful, hilly country at this facility. Florida is notoriously flat, but this area is not. The turf and terrain is suitable, and the climate is always great,” Richard said. “We have a chance to create competitions that won’t conflict with the rest of the international calendar and will entice foreign riders to come here. We want to make the U.S. the place to come.”

Work is underway on the new arenas at the Ocala Jockey Club. Photo courtesy of Richard Trayford.

How It All Began

The story of how the Ocala Jockey Club became the most anticipated new eventing facility in the U.S. started when Jennie Brannigan rented a townhouse on the property last winter. Jennie got to know the Nygaards and told them the Ocala Jockey Club, which has some of the highest elevation levels in Marion County, could host an excellent cross country course.

Jennie put the Nygaards in touch with Richard, and they attended the Ocala Horse Properties International Festival of Eventing in April to watch the CCI2* at the Florida Horse Park. That’s when the Nygaards decided they wanted to move forward with bringing eventing to the Ocala Jockey Club, which already has multiple barns, rental homes, and a large restaurant and event facility.

Then it became a matter of putting together the right team for the job. Richard spoke to Mike Etherington-Smith, who was recently named the new course designer for the CIC3* at Red Hills, and asked if he might be able to stop by and see the property at the Ocala Jockey Club during one of his site visits to Tallahassee.

“The Ocala Jockey Club is an outstanding venue for eventing,” Mike E-S said. “The shape of the venue, its accessibility, the type of ground, the terrain and what will undoubtedly be excellent viewing all contribute to what is a superb platform on which to offer competitions of all levels. As a designer it is terrific to be involved from the start of a new event, and even though there is a lot to do there is, quite rightly, a real buzz of excitement and enthusiasm.”

Mike will design the CIC3* course, with Clayton Fredericks on board to design the CCI2* course. Richard Jeffery will design the show jumping courses, with Alec Lochore signed on as event manager. Both Mike E-S and Clayton visited the site during the last week of September, and the initial course design and overall event layout is set. Ground has already been broken for the main arena and warm-up arena. 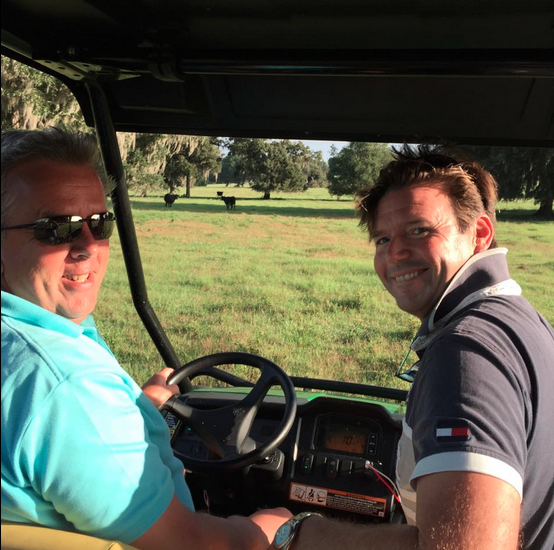 Mike Etherington-Smith and Clayton Fredericks during a site planning visit at the Ocala Jockey Club. Photo courtesy of Richard Trayford.

While Richard is firmly focused on making next year’s inaugural CIC3* a huge success, he’s also already thinking big when it comes to what the Ocala Jockey Club’s property can offer U.S. eventing. With plenty of space across its 950 acres and ideal terrain to build a world-class cross country course, Richard intends to put together a bid to run a CCI4* at the venue starting in 2017.

Mike E-S agrees that the Ocala Jockey Club could host a CCI4* in the future: “Down the line there is no question that the Ocala Jockey Club could stage a four-star if wanted,” he said. “The terrain and the footing are appropriate. There is plenty of room for large crowds of spectators and for a large exhibitor village. Access is superb, and there is plenty of accommodation close by.”

EN will continue to bring you the latest news as construction continues at the Ocala Jockey Club facility, and we look forward to getting a closer look at the progress over the winter season. Click here and here for more photos of the Ocala Jockey Club, and you can watch the video below to get an idea of the terrain at the facility.