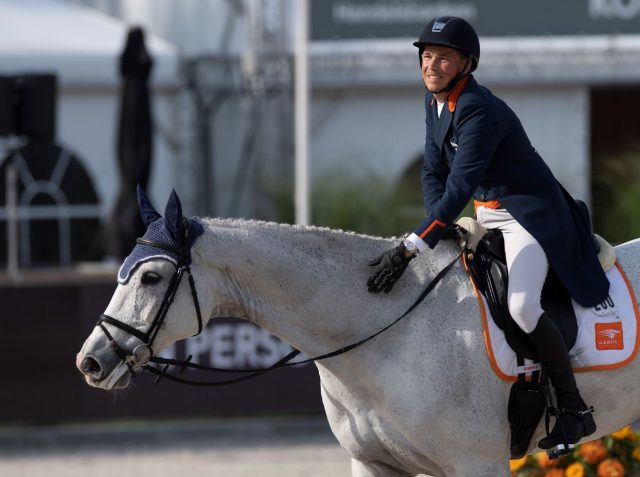 Tim Lips and Bayro came to Military Boekelo on a mission to become the first Dutch winners in the 48-year history of the event, and they are well on their way after scoring 19.2 to handily lead on the first day of dressage in Enschede, Netherlands.

EquiRatings confirmed 19.2 is the lowest dressage score ever recorded by a Dutch rider at any international level, besting Eef Hamers and Balou’s score of 21.1 at Barroca d’Alva CCI* in 2015.

Tim and Bayro, a 12-year-old KWPN (Casantos X Vanya, by Corland), also set the Dutch CCI4* dressage record at Luhmühlen this year, and he credited his trainer, Nicole Werner, for strengthening their performance in the first phase.

“Bayro was quiet in the bridle and remained extremely relaxed. Whether I have a chance to be the first Dutchman ever to win the Military Boekelo is an open question,” Tim said. “Dressage no longer counts as much as before in relation to the cross country on Saturday and the jumping on Sunday.

Time penalties on cross country cost Tim and Bayro the Boekelo win last year, when they finish second to Tim Price and Cekatinka, and he said he is determined to go faster this year.

“The footing is perfect, and we showed that Bayro can handle this competition last year,” Tim said. What matters is to keep my focus and to keep the attacking the cross. If I don’t do that I’ll run into time penalties, and I want to avoid them.”

Germany’s Julia Krajewski and Samourai du Thot, a 12-year-old Selle Francais (Milor Landais x Melitos du Thot, by Flipper d’Elle), have been widely tipped to challenge Tim for the win and sit second on 22.6 after dressage.

After uncharacteristic trouble on cross country at Aachen over the summer, Julia and “Sam” bounced back to win the Nations Cup at Waregem CICO3* last month. Having won three of their last four international runs, Julia and Sam are serious contenders to watch this weekend.

Great Britain’s Laura Collett and London 52, a 9-year-old Holsteiner (Landos X Vernante, by Quinar), won the Blenheim CIC3* last month and sit third on 23.1, a personal best at three-star level for the horse. London 52 is making his CCI3* debut at Boekelo.

The U.S. does not have a team in the Nations Cup but is still represented by two strong pairs in Tamie Smith and Judy McSwain’s Fleeceworks Royal and Doug Payne and Lisa Walls’s Getaway. Both are scheduled to go tomorrow in dressage at the following times:

You can watch Tamie and Doug’s tests live on the Boekelo live stream at this link. Cross country and show jumping will also be streamed live; you can view the broadcast schedule here.

Stay tuned for much more from Boekelo. Go Eventing.