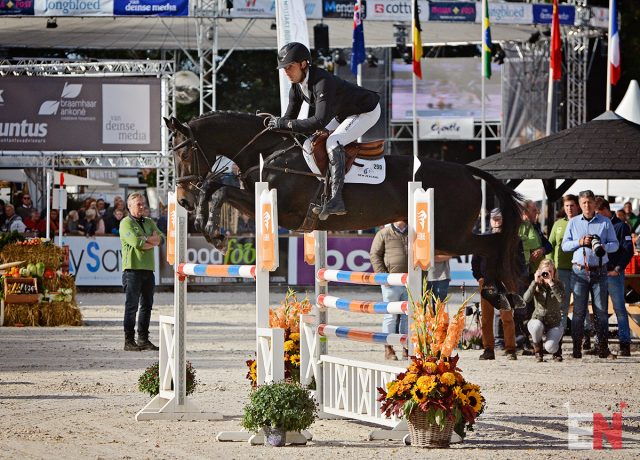 We saw a thrilling finale at Military Boekelo CCIO3* after what can only be described as a dramatic morning here in Enschede, Netherlands. Following a grueling cross country day in the mud that saw only 50% of the field jump clear, seven horses were withdrawn prior to the final horse inspection, including Alex Hua Tian’s mount Don Geniro, who set in second place.

That moved Tim Lips and Bayro up into second to battle it out with overnight leaders Tim Price and Cekatinka for the win. Tim Lips last won Boekelo, which serves as the Dutch National Championships, in 2007, and the crowd went absolutely wild when he jumped clear to put the pressure on Tim Price, who could not afford a rail with Cekatinka.

The 11-year-old KWPN mare (King Kolibri X Katinka, by Julio Mariner xx) was nonplussed when she trotted into an electric atmosphere and jumped a beautiful clear round to clinch the win for Tim Price on 43.7.

“I’m super proud of how she jumped,” he said. “She was a little tired in the warm-up, which is typical in a three-day, but was starting to show me how much she delivers in the ring in a performance environment. She used the applause from the previous rider to her advantage. She realized it was something to work at, and she really excelled.”

The question now becomes whether Tim will keep the ride on the mare, as he was only meant to temporarily take the reins during his wife Jonelle’s pregnancy. “She’s Jonelle’s horse, ultimately. She suits her. She’s a great one for her. She’s been a pleasure to ride. She’s healthy and came through the event great, which is half the battle. We’re happy and excited about next year.” 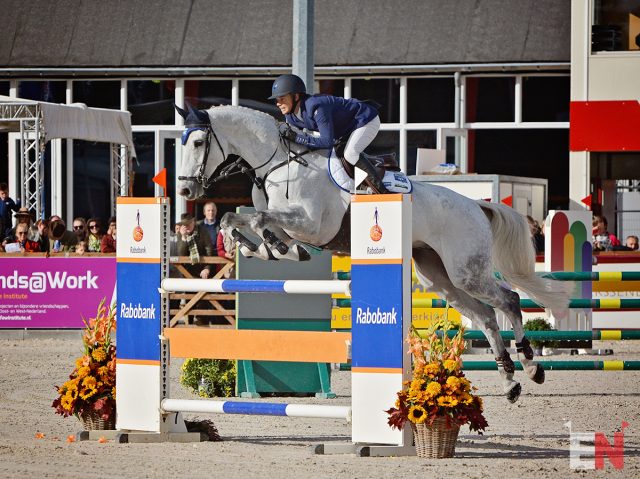 Tim Lips ultimately had to settle for second place with Bayro, an 11-year-old Hanoverian (Casantos X Vanya, by Corland), but took the title of Dutch National Champion thanks to being the highest-placed rider from the host country.

The past seven runnings of Boekelo have seen an average of 1 in 5 jump clear show jumping rounds at Boekelo, according to EquiRatings. But those years were all held on grass prior to the installation of an all-weather arena for the 2017 event. Horses jumped beautifully on the surface today to give us a 32% clear jumping rate.

Tim Price led New Zealand to a win in the Nations Cup Final on a final team score of 160.9, followed by Germany in second on 174.3 and Australia in third on 203.7. Great Britain did not complete a team at Boekelo and ultimately relinquished the Nations Cup series lead to Germany, who sat only 10 points behind Team GB heading into Boekelo and take the 2017 title thanks to their podium finish. 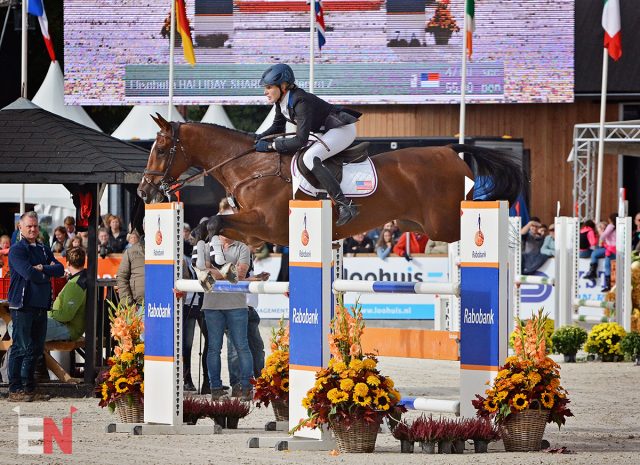 Team USA, led by Chef d’Equipe Leslie Law, completed all three of our riders to finish seventh out of 11 teams. Liz Halliday-Sharp and Deniro Z, a 9-year-old KWPN (Zapatero VDL X Zonne-Trend by French Buffett xx), finished 16th of the 68 combinations that completed the event, adding one rail today for a final score of 59.0.

“I tried to give him a little room and a lot of power, which usually suits him to a square oxer like that. I knew that was the last big question for him, and I think he just tipped it out of a bit of greeness,” she said. “I couldn’t be happier with the way he jumped, though. He jumped better than he did at Blenheim, and he’s never run this long in his life and never in the mud.. I couldn’t have asked for more from him really. He was prefect all weekend.”

As for what’s next for “Niro,” first he’ll enjoy a long vacation and then gain more mileage at the three-star level during the 2018 season. “We’ll maybe aim for a four-star at the end of next year, but I’d like to give him a chance to find his way. He moved up so quickly this year. He just did his first CCI* less than a year ago, so I think the right thing for him is to give him time, and hopefully we’ll have a really special team horse some day.” 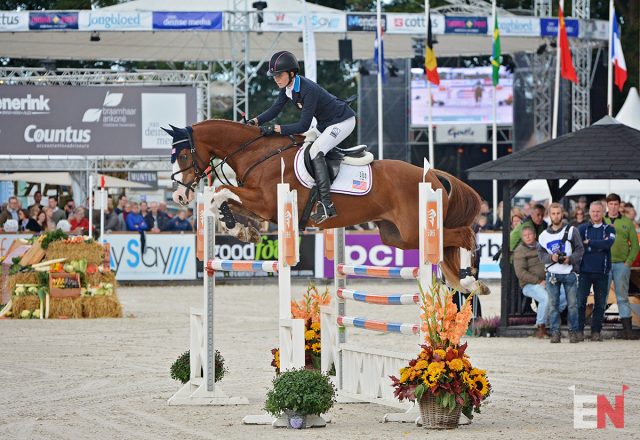 Caroline Martin and Pebbly Maximus, her own and Sherrie Martin’s 14-year-old Irish Sport Horse (Nazar X Kelshamore Lady), had two rails down in show jumping to finish in 32nd place on 63.4 in their Boekelo debut.

“I was surprised when the first rail of the triple went down. It definitely wasn’t his fault. Maybe I could have put more leg on, but it was one of those ‘what if’ rails,” Caroline said. “When I jumped the liverpool, I was a little bit on a left to right line because the turn was tight, and going to the oxer I didn’t keep the rhythm. That was 100 percent my fault. I’m disappointed, but it doesn’t take away from the fact that the horse was really good all weekend and did everything I asked.”

As for Caroline’s thoughts on her first Boekelo: “It rained a lot! I’m really proud of how he did on the cross country. I came here really wanting to have a good cross country run, so I did what I wanted to. Thank you to Ms. Mars for the grant and letting me get my feet wet overseas again. I’m glad I got to do another senior team, especially since it’s my first year out of Young Riders. Hopefully I keep improving each time I come over.” 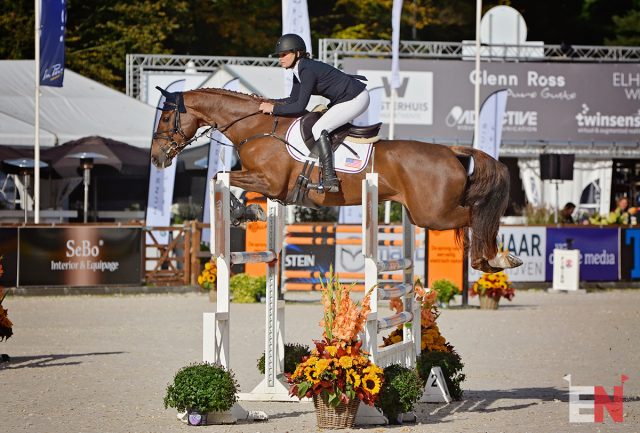 Katherine Coleman and Kalai LLC’s Back to Business II, a 10-year-old Irish Sport Horse mare (Harlequin Du Carel X Moxella, by Quick Star), had two rails down to complete the mare’s second CCI3* in 66th place on a final score of 83.9.

“I went to half halt a bit, and she really goes against my hand and is fighting me so much that she’s not paying attention to the jumps. She started off really mega and built a bit as the course went, and then went against my hand and was too busy fighting me to pay attention to the jumps. That’s been a theme with her in both the jumping phases. We’ll sort that this winter and try to play with bits.”

This is Katherine’s second time competing at Boekelo, and she said she will definitely be back. “They make it fun for the masses, which then draws a big crowd. Someone who’s not horsey can come here and absolutely enjoy themselves all weekend. I think that’s key for event organizers in general to get more interest in the sport — to make it appeal more to the masses.”

It’s definitely been a very muddy and wet Boekelo, and while we saw some sore horses following cross country, we are relieved to report that no horses or riders suffered any major injuries this weekend. We have much more to bring you from Boekelo, including a special edition of Who Jumped It Best, so stay tuned! Go Eventing.