As eventers, we’re known to be among the toughest of equestrians. We get knocked down, and get back up and back on. We fall off, and climb back up and keep going. We frequently ignore doctor’s orders and are back in the saddle far sooner than any “normal” person would consider reasonable. It’s no joke that we’re a tough breed, but it’s also no joke when you push yourself too far.

If you’re anything like me, chances are your horse or horses have a regular chiropractor, get new shoes on schedule without fail that likely cost more than most of the shoes you own (except for maybe your tall boots you show in), and you pay close and careful attention to how they move, how they feel, if they are off their feed at all, if their saddle fits, if they are experiencing back pain or any lameness, and more. We pay such close attention to our horses, that sometimes it’s a wonder we don’t do the same for ourselves.

Who hasn’t said those words to a family member or friend after a particularly nasty fall or barn accident or injury? I know more than once, I’ve been back in the saddle far sooner than recommended, or just avoided the doctor’s office all together so that I didn’t get news that I didn’t want to hear, and likely wouldn’t listen to. Until recently that is. 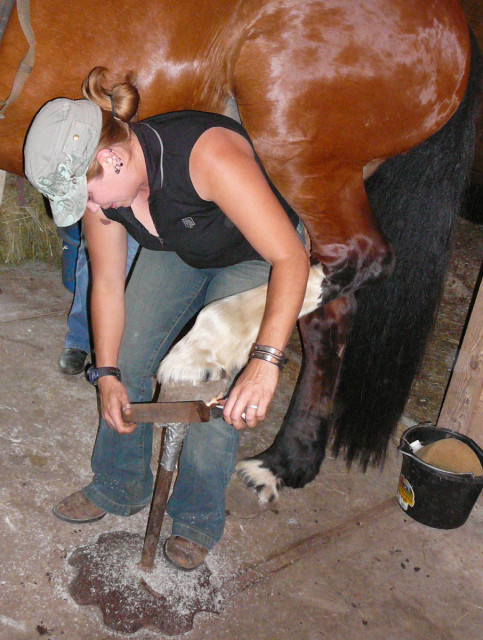 How to get scoliosis 101. Photo provided by CJ Millar.

After years of issues and injuries (I’ve been riding since I was 3 years old) and chronically ignoring doctors for far too long, as this fall season came to a close, I suffered a somewhat minor injury that has me laid up now for the past three months, and maybe another one to two more.

What happened, you ask? Well, we were camping for Halloween at Gettysburg with the horses to ride the battlefield, and my dogs were tied to the horse trailer on tie outs, and managed to wrap around my legs without my noticing until I stood up — and promptly fell down, HARD. So hard, that I managed to bruise a rib and knock the wind out of myself so badly that I couldn’t breathe for what felt like minutes, and was short of breath for the rest of the day.

My friend asked if I needed to go to the ER. I couldn’t answer because I couldn’t breathe, but eventually I sat up and told her no. So what did I do next? Naturally, I tacked up my horse and rode. All day. Of course I took the Robaxin I had on hand (for my horses, of course, in case anyone was sore) and some Aleve, but considering how much pain I was in, this was probably not the right course of action.

Well, you see, years ago in a truly freak accident, while walking to the ring to teach a lesson, a horse a student was warming up on was stung by a bee and bolted. The horse had seen the gate open (I was walking up to it to enter the ring) and charged it. When she got closer, she realized I was there, and was closing the gate. She tried to stop, and when she realized she couldn’t, she tried to jump the 14′ long metal tube gate.

She didn’t clear it. Or me. The impact knocked me (literally) out of my shoes and twisted me in half. I went to the ER, but never followed up with the orthopedist like I was told to. Instead, I was riding — while still on crutches — in a week, just without stirrups to avoid pressure on my twisted achilles tendon and sore back.

What the gate looked like after being smashed between me and a full force galloping horse (left), my foot the next day with no photo editing — yes, it’s really THAT green (center), and me on a horse sans stirrups or helmet a few days later (right) — great decision all around, ugh! Photos provided by CJ Millar.

Years prior, I used to do my own hoof trimmings, and trim some clients’ horses for extra cash. When I had a tumble from a horse that landed me at the doctors, an x-ray of my back showed situational scoliosis. I didn’t even know you could GIVE yourself scoliosis, but apparently you could, and I had. I was told to not trim feet, and take three months off from riding. I stopped trimming feet, and rode the next day.

And a few years ago, when riding a new horse I acquired with a habit of dumping people, he slid out from under me and I landing sitting, jarring my spine so badly that I knocked the wind out of myself and couldn’t move. The horse ran triumphant around the arena, and it took two friends 15 minutes to catch him, and one friend another 10 to help me get to my feet. And get back on.

I rode for another week before the pain was so bad — I couldn’t sit or sleep comfortably — that I finally went to the doctor where he informed me I likely had a transverse process fracture in my spine and needed an MRI and to not ride for three months to let it fully heal. I never got the MRI. I never stopped riding, either.

And these are just three of the standout incidents, although there were many others, such as a fall in my 20s that jarred my spine and head (without hitting my head) that I wound up on anti-seizure medication because a CT scan showed a slight tear in the membrane of my brain. I rode anyway. See a trend?

All these incidents added up to this past Halloween at Gettysburg. I thought that I could, once again, just keep riding. But, after seeing a good friend 10 years my senior go through major back surgery that is keeping her out of the saddle for almost a year — and had her barely walking for several months — I finally sat down and thought, oh no. This could be me.

So, after Halloween, I pulled everyone’s shoes, and did what many eventers do, and give their horses some time off in the off season. Only this time I didn’t just pull the next horse in the rotation in to be worked. I took time off myself.

The good news is that between seeing a chiropractor and acupuncturist regularly (for myself, not my horses!), I am starting to wake up in the morning with feeling in my arms rather than numbness and tingling. I am starting to realize what it’s like to feel good, and not in some sort of pain that I mostly ignore.

And I realized that the first few weeks of not riding were harder than I ever imagined. Not only did I miss it, but as my nerves repaired themselves and the muscles started to regain circulation, it HURT. It hurt more than it ever had before because I had so badly damaged my nerves, that they were no longer sending pain signals to my brain. So as they healed, they told me just how messed up my back was all this time, and it was bad. But, it’s getting better, and I am getting better.

My resolutions this year include starting my horses back in work slowly, from the ground up, and following my own advice. I’ve been going to the gym the past two months, and already started working on cardio and lower body, until my upper body heals and can tolerate strength training.

I resolve to take as good of care of myself as I do of my horses, because it’s only fair to them (and me). And I resolve to keep riding — when me and my horses are sound — and let myself heal when we are not. Because, let’s face it, I want to be riding for many, many years yet to come and it’s not worth sidelining yourself to get in one more ride, just like it’s not worth injuring your horse for that one more cross country run if his soundness is questionable.

So here’s to hoping I’ll be back in the saddle (and back blogging about saddle and girth fit) very soon, for a very long time to come!

Looking forward to getting back in the saddle for more of this, come spring. Cheers to 2017! Have any resolutions of your own to share? I’d love to hear them in the comments below. Go Eventing!