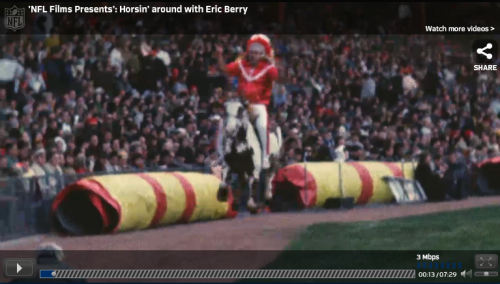 Last week we showed you a Buzzfeed GIF that poked fun at football player Eric Berry’s fear of horses. This week, NFL Films takes an in-depth look at the Kansas City Chiefs safety’s fear, which is clinically called equinophobia or hippophobia. Eric’s fear is a problem because the team’s mascot is a horse that gallops around the football field pumping up the fans throughout the game. Berry said that he can keep his fear under control as long as there are “10 to 12 players” between him and the horse at all times. Are eventers as tough as football players? We’re at least tougher than this guy. Go Eric.