EN’s Hartpury coverage is brought to you by Trefonas Law, an immigration law firm located in Jackson, WY.

Trefonas Law features experienced U.S. visa and immigration law practitioners working with the equestrian industry. We can provide advice and assistance with P1 and 01 athlete visas, short-term work visas, as well as general immigration services. Contact us to see how we can find the right visa for you! 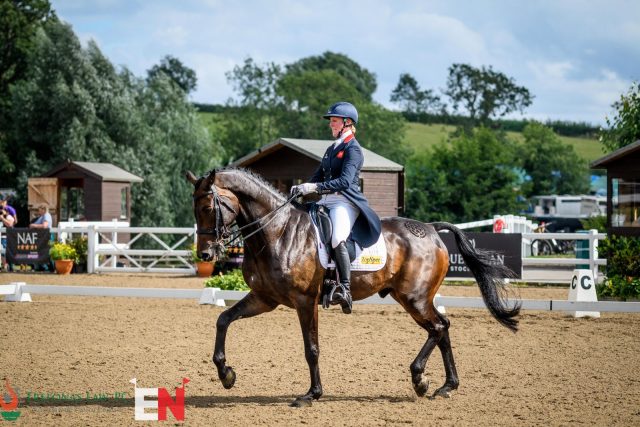 If yesterday’s dressage day at the NAF Five Star Hartpury International Horse Trials was all about the up-and-comers, today’s action focussed almost entirely on those horses and riders in contention for a coveted spot on the British team for next month’s European Championships. As a result, we saw significantly more sub-30 scores — 17, in fact, as opposed to yesterday’s two — and a bustling line-up of some of the sport’s biggest names. As the first phase came to an end, we welcomed a fitting new leader: Nicola Wilson and her remarkable ten-year-old Holsteiner JL Dublin, who won the CCI4*-L at Bicton in June. After that, he was added to the Olympic shortlist in place of stablemate Bulana, and though he wasn’t ultimately part of the final five selected as team members and reserves, he certainly made his mark as a team horse of the future. In this unusual year, with its two championship opportunities (plus a rare autumnal Aachen!), he could be about to meet that future swiftly.

Today’s performance certainly hasn’t hurt his chances of selection for the Europeans, due to be held in Avenches, Switzerland in six weeks’ time. Though he’s been a consistent sub-30 scorer, he produced a career-best mark of 23.9 to finish the day at the top of the pack.

“I was thrilled with him,” says a beaming Nicola, who notes that there’s still a better mark to come from the expressive gelding.. “I went for a really good mark in his extension to power him out of the corner and he just broke the rhythm over X, which was a shame, but we salvaged it to finish, and I thought his changes were really light and expressive. He was really good boy, and he’s getting more and more confident in there.” 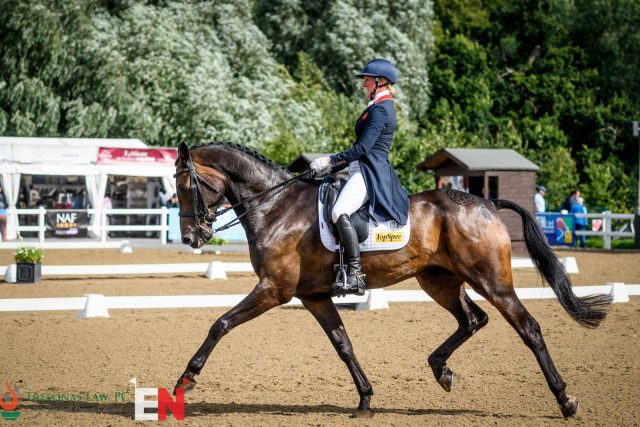 More and more, ‘Dubs’ is stepping out of his role as precocious ingenue and into a new identity as a powerhouse of the upper level scene.

“He’s very level-headed, he likes to please, and he’s learning to show off more and more each time he goes in,” says Nicola.

This has been helped enormously by his victory in Bicton’s inaugural CCI4*-L: “He went for a nice steady run at Burgham, and there were quite a lot of squeals there, and a lot of excitement when he got off the horsebox yesterday. He did think that he owned the place — so we did have to remind him that he’s one of many [horses] here!” 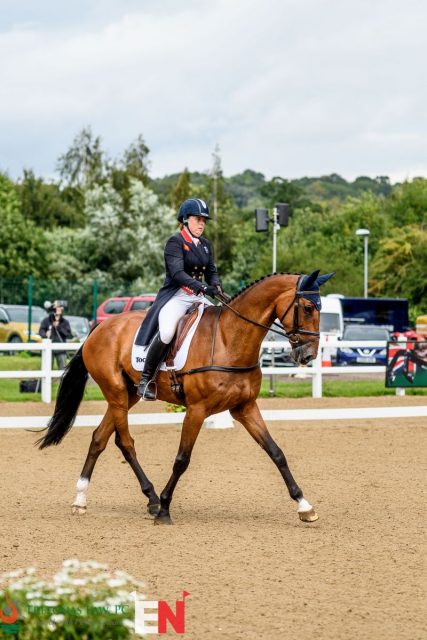 Pippa Funnell and Billy Walk On head up an impressive triple effort for the rider. Photo by Tilly Berendt.

Pippa Funnell was the judges’ star student today, piloting each of her three horses into the top ten with a trio of expressive, correct tests. Chief among those was Billy Walk On, the lanky British-bred twelve-year-old with whom she finished fourth here in 2018. That year, he posted an impressive 25.6 — at that point, his best-ever four-star score. Today’s efforts saw him earn a 24 and a test sheet chock full of 8s for overnight second place, proving that careful production can create a powerboat out of a cruise liner.

“I was really happy with him; when he gets strung out he loses a bit of jump, and when you get that jump, you get the changes. He got those changes today,” she says.

Not far behind him, stablemate and 2019 Burghley victor MGH Grafton Street sits fourth on 24.8, despite missing out on his chance at arena familiarisation this morning.

“He’s not one you’d want to overdo it with, but at the same time, he’s the one that always has the last laugh,” says Pippa of her five-star champion, whose reputation for being capable and flashy on the flat is as well-bolstered as his reputation for being mercurial across the country. “He’s always been pretty consistent, but I felt the lateral work was a lot better than it’s been recently — he naturally has a short neck and wants to come back at you, so that was better today. He did have one squeak where thought he was going to shoot forward and have a little bit of a joke, though!”

Such a close set of marks becomes all the more impressive when you consider that leggy Billy Walk On and compact MGH Grafton Street couldn’t be more different horses — either in build or brain. 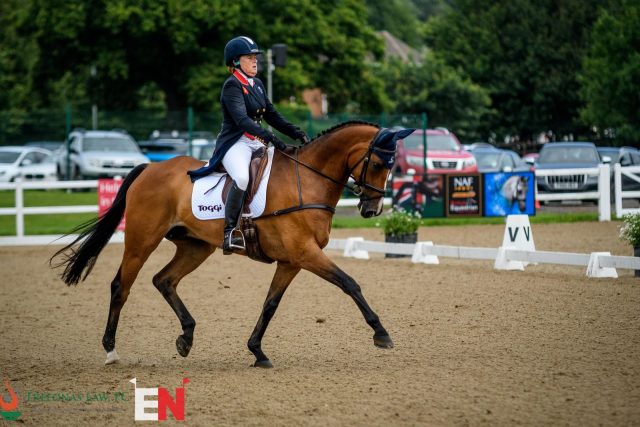 Perhaps more of a surprise — and, as such, the biggest delight for Pippa – was the tidy 27 delivered by Majas Hope, who sits in eighth place going into tomorrow’s jumping phases. The fourteen-year-old Irish Sport Horse has been a consistent campaigner for Pippa, who rode him as British team trailblazer at the 2019 European Championships, but unlike his stablemates, he’s not quite found the sparkle in the first phase. But this year, we’ve seen him shake off the mid-30s scores of yore in favour of impressive and competitive high 20s marks. The secret? A kindred spirit from another discipline.

“I was really thrilled with him this morning. I had some super lessons with Carl [Hester] at the beginning of the year, before he got super busy training more important people to win medals,” laughs Pippa. “He was a joy and it gave me confidence that I was on the right line, because he’s very much like how I try to be — not doing it by force, but doing everything softly and trying to get [the horses] to give it. It’s just a really nice way of doing it.”

Though there are still two tough phases to come, it’s not a shabby start to the weekend for Pippa, whose goals for the rest of the season were widely echoed through the day: “They’re lovely horses and I’d love, love, love one of them to try to get to the Europeans, but there’s a lot of us still fighting for it.” 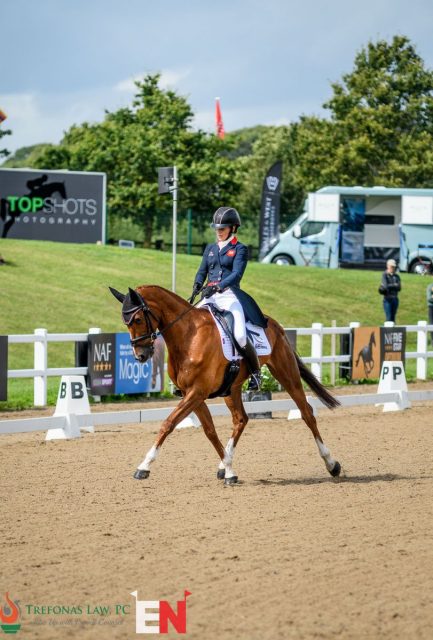 There’s a unique kind of pressure that comes after delivering an excellent result, and Sarah Bullimore knows that all too well after Burgham, where she and her homebred Corouet came achingly close to winning the British Open Championship. Rather more excitingly, they put a 19.6 on the board in that CCI4*-S class, and while the gelding often impresses in this phase, everyone gathered en masse to see if he could do it again.

He didn’t, quite, though his 24.2 was strong enough for overnight third and just three-tenths of a mark off the lead — and that was despite the inherent buzz of the crowd on the hill adjacent to the arena, which caused him to lose some suppleness in the shoulder-in along that side. Though Sarah had hoped for another unsurpassable score to bolster her campaign for the Europeans, more prominent was her delight in the tiny, opinionated chestnut’s brain.

“There’s still more [to come],” she says. “He’s just getting so much more rideable; he’s accepting now that we can do it as a partnership and I’m allowed a little bit of input. Not too much, though — there’s a balance!”

Particularly notable were Corouet’s tidy, correct flying changes, which were blissfully unfussy and easy. As it turns out, they feel every bit as pleasing  to produce as they are to watch.

“They’re lovely to ride, because you always know that they’re going to happen, so you can actually ride them rather than pulling them together and preparing and constantly asking ‘are you still with me?’ But he can do a line of twos easily,” says Sarah, who will aim for Corouet’s CCI5* debut this autumn if he’s not selected for the British team. 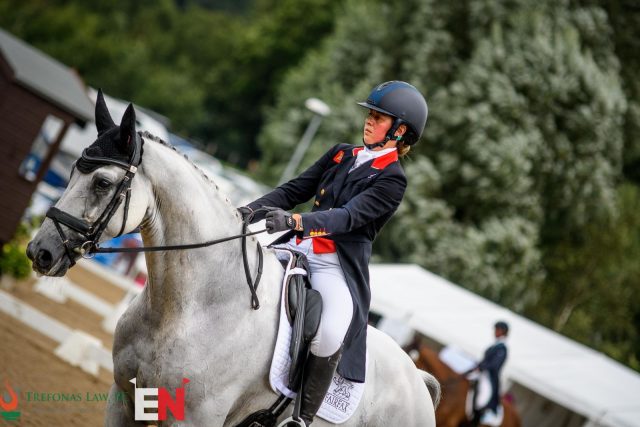 Though it’s no surprise to see Kitty King and Vendredi Biats in their usual haunt near the top of the leaderboard, their 24.9 and overnight fifth today came after an unconventional lead-up to the event that was necessitated by the odd season they’ve had so far. They’ve now aimed at four long-format events without being able to run in any of them.

“He’s had kind of a busy, funny spring, preparing for Badminton, then Luhmühlen, then Bicton, and then having to prepare for Tokyo,” explains Kitty, who was first non-travelling reserve for the Olympics with the gelding and had to undergo pre-export quarantine. “Even though chances were we weren’t going to go, we were high up the reserve list so had to prepare as though we were going. Then he went out to Liege [Airport] to make sure nothing fell off the ramp, and then he came home. So he’s been gearing up for a big three-day and he’s like, ‘am I going?!’ And I’m like, ‘nope, not today!'”

The effect of all this preparation without a long-format run meant that the sensitive Selle Français had reached a fitness peak that was a level beyond productive, and so after Kitty waved her teammates off to Tokyo, she opted to turn ‘Froggy’ away for ten days to let him diffuse.

“He was too fit and he was going to go over the top like the racehorses do, basically,” she explains. “Now he’s had a week or ten days back in work, and he’s come out and been really good. I thought he might be a bit fresh, because he’s not had the amount of work and build-up to Hartpury as he would normally.”

Nevertheless, the gelding — who can be as quirky as he is talented — produced one of the week’s most relaxed tests, just losing minor marks in the walk pirouette. As they look ahead to tomorrow’s challenge Kitty, whose role in Team GB’s success was probably one of the toughest to endure, is looking on the bright side — her time in training camp provided excellent opportunities, and there’s another worthy goal on her horizon.

“It was great to be able to use such wonderful facilities, and it was great just being able to concentrate on one horse for ten days. When he was finishing quarantine he was going really well; he did the Olympic test with [team dressage trainer] David Trott really nicely and we got to jump around the track they’d built for us, which was great. He was really ready to roll, and were not quite back to that point yet, but he’s not far off — but you can’t keep peaking them day in and day out. Now, fingers crossed, we get selected for the Europeans — that’d be the ultimate goal.”

Tomorrow sees both jumping phases unfold, with showjumping starting from 8.00 a.m. BST/3.00 a.m. Eastern and cross-country running from 10.50 a.m. BST/5.50 a.m. Eastern. Both the showjumping and the cross-country here tend to be built big, because they’re intended as preparation for the autumn’s long-format events — and with less than a pole separating the top ten, every second will be enormously valuable.

You can keep abreast of all the action in the CCI4*-S feature class, as well as the CCI3*-L and CCI2*-L classes, with Hartpury’s free live-stream channels. They’ll be featuring all of the weekend’s excitement, paired with expert commentary from Jonty Evans — so don’t miss out. Want to take a look at the beefy, bold track, designed by Eric Winter? Click here to ‘walk’ it via the Cross Country App.

Until then? Go Eventing!

The top ten after dressage in Hartpury’s CCI4*-S.