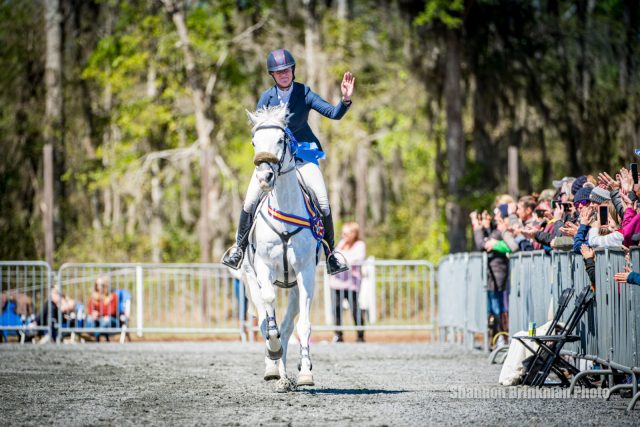 After yesterday’s cross country round, Lauren Nicholson had mentioned that Landmark’s Monte Carlo always likes it at Red Hills International Horse Trials in Tallahassee, Florida and tends to do well at this event. She’s right: the pair finished 4th here in the four-star in 2021, second in the CCI3-S in 2020, and 5th in 2019 three-star. Altogether, they’ve made the trip to Red Hills nearly every year in the last decade. This year they came out on top.

Overnight leaders Will Coleman and Off The Record withdrew before show jumping today. Will told EN that the gelding had knocked his stifle at the last water complex on yesterday’s course and while he looked good last night, he came out of the stall stiff today. Will had radiographs taken, which showed no damage, but he opted not to jump the gelding in the final phase.

Subsequently, Lauren and “Patrick”, as he’s known around the barn or “Patty” for short, were left in pole position with a rail in hand over second place. They needed it — knocking a rail at fence 9 on the Chris Barnard-designed course — but it was enough to clinch the victory with a final score of 42.1, earning a fist pump from Lauren.

“Patrick is a barn favorite,” she says. “Everyone is very exited for him. He’s 16 years old now and he’s done a lot. He’s like an old friend at this point.” 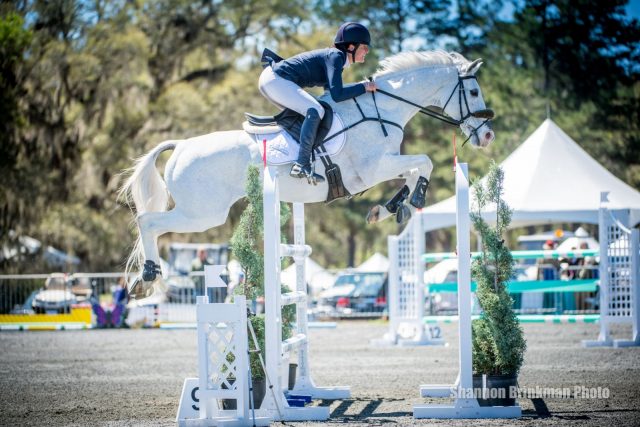 Patrick actually won his first start at the four-star level back in 2015 at Jersey Fresh International. Since then, they’ve contested this level at 21 international events, coming tantalizing close to a win a few times over the years. Lauren and Patrick ended their 2021 season with a fantastic 6th place at the inaugural Maryland Five-Star in October and then after a winter vacation they kicked the 2022 season off with a spin around the Open Intermediate at Rocking Horse Winter II before heading here to Red Hills.

A product of Ms. Jaqueline Mars’ breeding program at Landmark Stables and Stonehall Farm, Patrick is a U.S.-bred Irish Sport Horse sired by Formula One out of a full Thoroughbred mare, Glamour, by Flash Tycoon.

“He was a quirky young horse to put it kindly, but we run a very patient program and he has really blossomed now and he’s one of my best buddies at this point,” Lauren said.

Lauren says she prefers to run Patrick at the Advanced level only a couple times a year, so they’ll fly around and Intermediate again next before aiming for a spring three-day, most likely Kentucky. 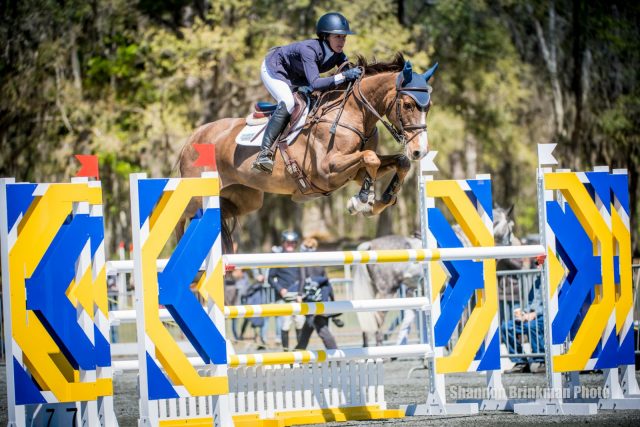 It’s a sweet second place for Mia Farley and her own BGS Firecracker, who jumped a stylish double clear round today — they have yet to knock a pole at the four-star level — to keep a finishing score of 43.0. The 21-year-old rider and the Irish Sport horse mare (Capitalist x Emmas Courage, by Courage II) bred by Patty Byrne of BGS Sport Horses stalked the top of the leaderboard all weekend, sitting equal 4th after dressage and moving up to 3rd after their fast round across country yesterday.

“Crack” is back and maybe on the verge of a comeback tour. After Mia and the now 12-year-old Irish Sport horse earned the USEF CCI4*-L Reserve Champion title in 2019, the mare developed a minor injury in early 2020 and Mia has been extra patient in tending to her rehab. She brought her back into full work over the course of nearly two years, stepping back up to the Advanced level last fall.

For the spring season ahead, Mia is aiming for the CCI4-L at the Tryon International May 3-Day event where she hopes to be competitive with Cracker. Looking to the fall season, she has her sights set on either a move-up at the Maryland Five-Star or possibly a trip overseas to contest Blenheim. It all depends on perceived competitiveness and funding, but both are possibilities depending on what’s in the cards. 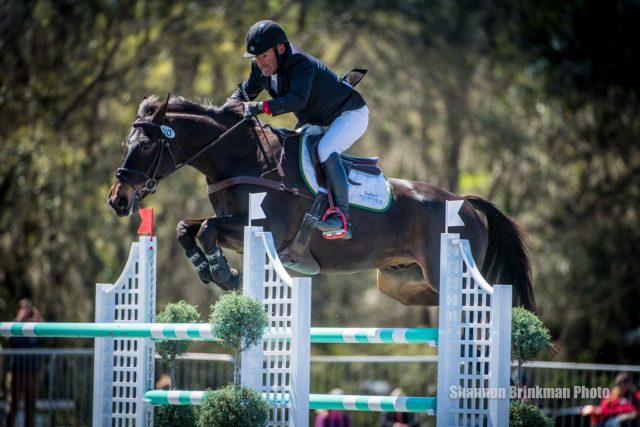 New Zealand’s Joe Meyer steadily climbed the leaderboard over the weekend with 12-year-old Irish Sport Horse Buccaneer, starting off in 17th position after the dressage. Their double clear show jumping round today clinched a 3rd place finish with a score of 45.5, leaping a grand total of fifteen places over the course of the weekend.

“I was so happy with him today. My wife told me I was in fifth yesterday so I said, ‘That’s pretty good going, I better leave the rails up today,'” Joe laughed.

Buccaneer was the fourth fastest horse of the division out on cross country yesterday, but Joe wasn’t always able to harness the gelding’s speed to his benefit.

“You always want a fast horse, but as a young horse I didn’t really have the controls that I needed. Now he’s a bit more experienced and I’m finding him so much easier to ride and he’s super brave. He’s fairly small — he’s only 15.3 hands — which is perfect for me. He’s just an awesome, awesome horse … When I ask him to go he just motors.”

Buccaneer was acquired as a 6-year-old by Joe and his wife Ruthie through the 2016 Gorsebridge Go for Gold sale originally as an investment for a client with the intent to be produced and sold in the States. He was bred by David McCann of Hartwell Stud in Ireland, sired by Grad Prix show jumper Clover Brigade out of a Thoroughbred mare, Tobar Bhride.

Joe ended up keeping the ride on Buccaneer and the gelding is now owned by the Team Johnny Syndicate. The pair’s next stop this year will be Carolina International later this month and then they’ll head to contest the CCI4-S at Kentucky in April and possibly a long format four-star after that. 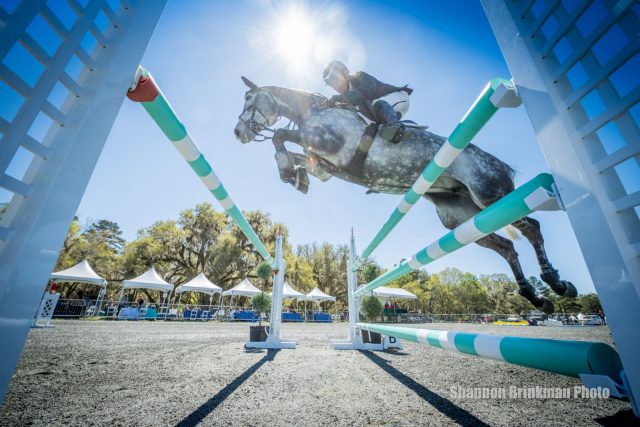 The future looks bright for Phillip Dutton and Azure, a new mount owned by Anne, Caroline, and Michael Moran. The pair tipped one rail but maintained their fourth place position after cross country to end the weekend on a score of 47.2. We will be interested to see what Phillip has in mind for this mare, a 10-year-old Irish Sport Horse (Omar x Cavalier Roselier, by Cavalier Royale), this season. 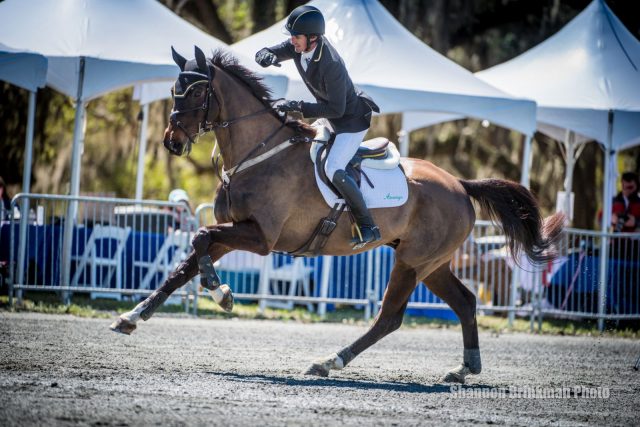 The pairs that ended the competiton in the fifth through eighth spots on the leaderboard all vaulted themselves up in the standings thanks to double clear rounds today. 2021 USEF CCI4-L National Champions Woods Baughman and C’est La Vie 135 (Contendro I x Anette, by Aarking xx), owned by the Baughman family, round out the top five having climbed back up the scoresheet from 9th after cross country. 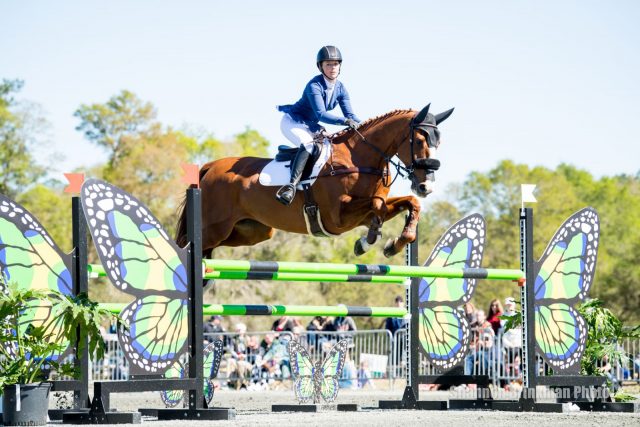 Meaghan Marinovich-Burdick had no idea that her weekend away at Red Hill would end with leading the victory gallop of the CCI3-S with her mare, Riviera Lu, finishing with a final score of 37.0. Their weekend started off with a nice ‘girls trip’ feel, as a friend from overseas accompanied her to the event and the week with just one horse feels like a nice little vacation from her training business back home.

A little shuffling at the top of the leaderboard in this division also occurred overnight, with Liz Halliday-Sharp withdrawing all of her mounts, including top-placed Cooley Moonshine and 3rd placed Quite Nice 11 with whom Meaghan sat equal with in the standings after cross country. The leaders heading into the afternoon, Arden Wildasin and Sunday Times, collected 8 faults for felled poles to end their weekend in 6th place.

Meaghan and “River” started off their weekend in 16th place after a dressage test that Meaghan says she was a touch disappointed with. A spirited mare (“She’s very spooky and opinionated, to put it in the nicest way,” Meaghan says), River took particular offense to the rain covers that the camera operators had draped over their equipment.

“I felt like I honestly left a couple points on the table with that test,” Meaghan reflects, “but I looked it up and it was actually her best dressage at an FEI event, so I’ll take it!”

Meaghan purchased the now 14-year-old Brazilian Sport Horse (Rembrandt Jmen x Ravena 3J, by Diapason des Gaves) sight unseen in 2019 and the pair has been building a partnership over the last couple years. Meaghan says that her and River’s trickiest phase is the show jumping but with the help of their coach, Cathy Jones-Forsberg, who travelled down from Illinois to support them this weekend, they were able to push their demons aside and jump double clear.

“Today I was just jumping and having fun with my buddy,” Meaghan said. 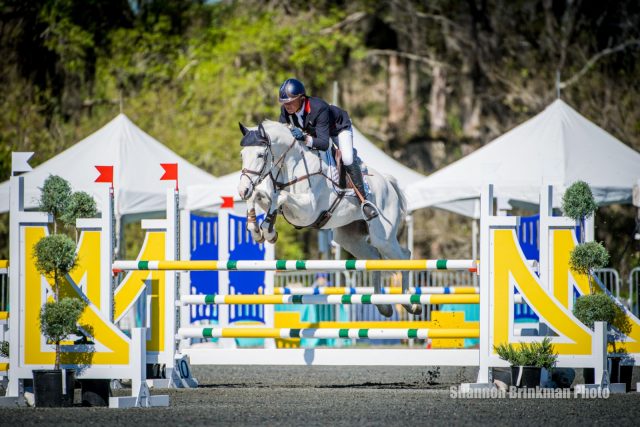 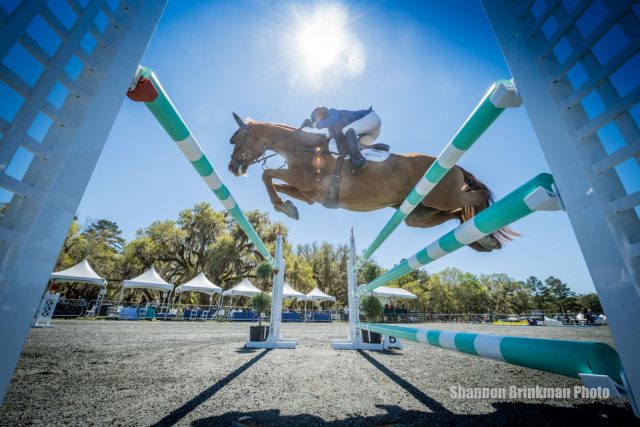 Jennie Brannigan certainly had a weekend to be proud of, winning both the Advanced and Intermediate divisions in addition to other top placings across division, all aboard horses owned by her longtime supporters Tim and Nina Gardner .

She and Advanced division winner Twilightslastgleam lead the division from wire to wire. The US-bred unraced Thoroughbred gelding (National Anthem x Royal Child, by Northern baby) had three rails in hand over second place and used one of them to finish on a score of 47.9. Jennie also took 6th place in this division with FE Lifestyle, the 12-year-old German Sport Horse gelding (Leo Von Faelz x Berina A, by Brandenburger) with whom she represented the U.S. in the FEI Nations Cup leg at Boekelo last fall.

Connory, a 10-year-old Holsteiner (Contrato x Hocaponta, by Laurie’s Crusador), was the Intermediate division winner. The pair took the lead after cross country, lifting them from 7th after dressage, and then jumped double clear today to stay on top. This is the third win in a row for the gelding co-owned by Jennie and Tim and Nina Gardner. They most recently won their first outing of the season at Rocking Horse Winter III in the Open Preliminary division last week and prior to that we last saw this gelding at the Fair Hill International April H.T., where he won the CCI3-S.

Finally, Jennie claimed both the 3rd and 4th places in the CCI2-S aboard Keepsake and Kismet, respectively. Both 7-year-olds were bred in the U.S. by Nina Gardner and both share the same sire, the Thoroughbred National Anthem, who is also the father of Twilightslastgleam. 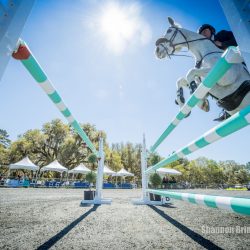 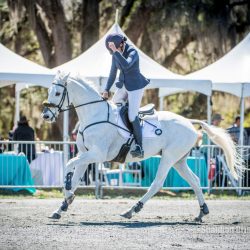 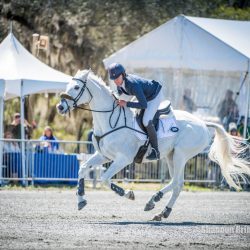 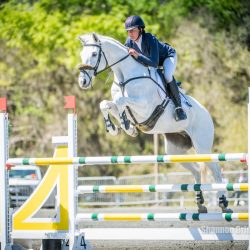 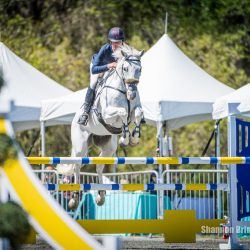 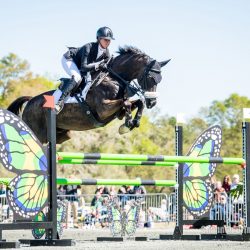 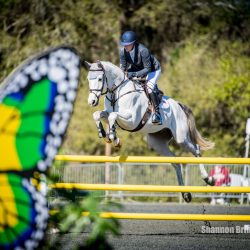 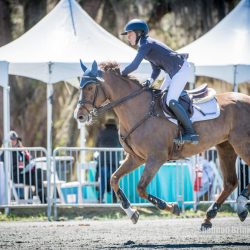 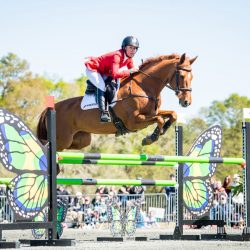 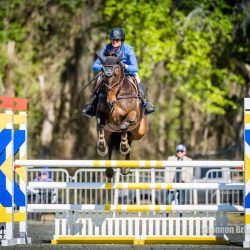 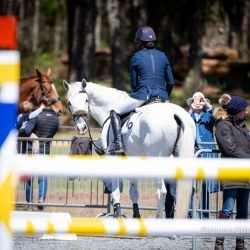 Thanks again to Shannon Brinkman for her photos and to Amanda Chance and Hilary McMichael for compiling the pedigree information found in this report and heard on the livestream. That’s all from Red Hills for now — thank you for following along on EN this weekend!