It is a truth universally acknowledged, that a man (or woman) in preparation for a Burghley cross country run must tell you one thing: “it’s big — [half laugh, half fear-tinged exhalation] — it’s certainly Burghley.”

Once the wave of abject horror at the thought of a big Burghley has swept over you (we know, it’s a real shock to the system), it’s time to unpack what, exactly, this year’s competitors will be facing. Let’s break down the basics, first of all.

Much of the talk about this year’s course has centred around the fact that, really, it couldn’t possibly be more different from last year’s course. For once thing, it runs in the opposite direction — this year, our intrepid competitors will run counter-clockwise around the Burghley estate. But more excitingly, for the first time this year the course features a flyover, which sits at a juncture by fence 16, the Pardubice, and fence 23, Capability’s Cutting. This multi-level effect will drastically change the feel of this section of the course and, if any photographer is lucky enough to be blessed with such marvellous synchronicity, a picture or slow-mo video of one over, one under will end up being one of the defining images of this year’s event. Here’s a map of this year’s course: you can see the flyover in the upper part of the map. You can also view the course on the interactive CrossCountry App — click here to see every fence, courtesy of Tom Crisp. 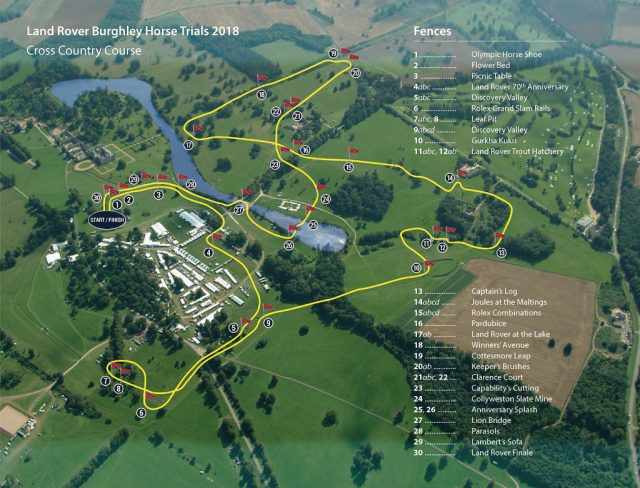 For comparison’s sake, here’s the map of 2017’s course — as you can see, the entire track has been reversed, which means that competitors will have to tackle difficult combinations like the formidable leaf pit early on. 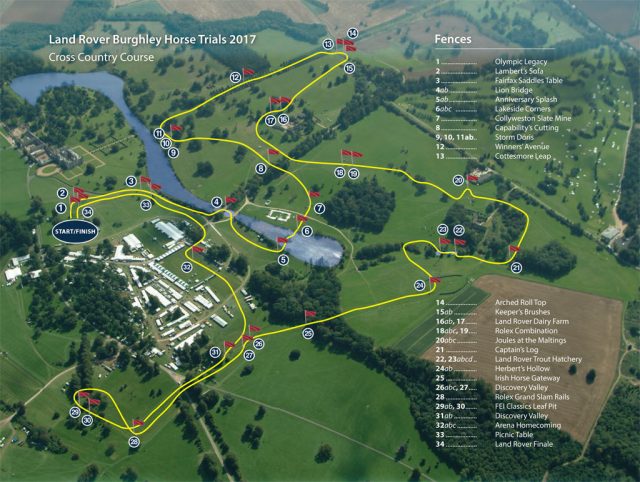 Savvy? Brilliant. This year’s course, in a nutshell, is as such: a first half full of challenging combinations, with myriad options and plenty of places to run into problems. That said, course designer Captain Mark Phillips has done a fantastic job of creating a course that is huge and enormously difficult, without being trappy, unclear, or unfair to the horses. In the middle of the course, competitors will have to gallop up the longest stretch of Winners’ Avenue we’ve seen — then, once they get to the top, they’ll need to pop over the formidable Cottesmore Leap with its Land Rover-sized ditch. From there, the combinations are thin on the ground, in favour of big, square single fences the whole way home — but at this point, the horses will have tired, and these fences require plenty of fuel left in the tank, so riders would be remiss to consider this a lay-up.

The Captain walked the course with Alice Plunkett in a brilliant and comprehensive video preview, which has suitably terrified most of the competitors. Give it a watch here.

We spoke to many of the riders over the past two days to get their take on the challenge ahead of them — here’s what they had to say:

Mark Todd (1st and 12th): “Do you ever like something like this? I don’t know! By my second walk I started to see a more clear path, but I certainly don’t underestimate it.”

Tim Price (2nd and 16th): “The ground is almost bang-on perfect, so that’s one thing I don’t have to worry about — but there’s a lot of fences along the way to worry about! It’s certainly not a Derby course. Ringwood Sky Boy isn’t the most organised at times with his technique, but he’s proven time and time again that he’s safe and knows what’s important out there. But it still gives me a bit of anxiety — can we do it 30, 40 times?

Oliver Townend (3rd, 5th, and 7th): “It’s as big a Burghley as I’ve ever seen in terms of dimensions. There are three serious hills, so it’ll be very stamina-sapping — there are no twenty-second breathers like we’d normally find around Winners’ Avenue, because even that’s a long, uphill pull and will tire the horses. It’s going to be very, very tough.”

Sarah Bullimore (4th): “It’s big, it’s bold, it’s brave, there are combinations that will cause some trouble — you’ll have to think quickly at the Maltings [14abcd], but there are get-out-of-jail options if you get it wrong. The Rolex combination [15abcd] is serious.”

Harry Meade (8th): “I’m amazed how different it is from last year — last year’s course was brilliant, and when they get it right, course designers often keep it largely the same for a few years, with some small changes. This year, he’s built a whole new, equally brilliant course. It’s very big, very square course with tricky combinations in the first half. One of the wonderful things about eventing is that you’re not really competing against each other — you’re cumulatively competing against the course and the conditions. There’s a hugely influential pull up to the Cottesmore Leap, but there’s not much to jump in terms of technicality once you’ve got through the first half of the course. Then, it’s mostly big, square fences. They can’t necessarily keep jumping out of a gallop; they’ll jump and land more static over these types of fences, so it takes more energy to pull away again. They’ve also designed good fences and then dressed them — so often you see it the other way around, and the fences are beautiful but not very interesting to jump.”

Bill Levett (10th): “It’s going to require a hell of a lot of stamina. The more you walk it, the more you start to see your way around — and the less upset you get about the dressage!”

Polly Stockton (15th): “I watched the preview and scared myself stupid! I’m pleasantly surprised now I’ve seen it in person. He’s a bold horse, but can be a bit greedy in his distances — I won’t know if I’m sitting on a four-star horse until Saturday.”

Buck Davidson (16th): “Captain Mark Phillips rode, and he understands how horses think and react. There are no funny jumps that confuse horses — the question is clear, and then they can decide whether to jump or not. American eventing has a lot to be thankful for with Mark — not just in terms of what he did for the team, he really upped eventing on the whole with his courses.

Andrew Nicholson (16th and 29th): “This way around will be tough. There’s so many ways of going at so many of the fences, but I’m not clever enough to work them all out — so I’m just going to go direct most of the way around. It’s too confusing to try to figure them out!”

Just walked the XC in Burghley…… promptly felt unwell in the deep recesses of my body…. 🤢 #massive

Ciaran Glynn (28th): “I didn’t realise how beefy it would be! There are big lumps of timber the whole way around. There’s a long pull up Winners’ Avenue that never ends, and then you’ve got to pop the smallest ditch in eventing at the Cottesmore Leap. I’ll get to that point and see how much horse I’ve got — then, if we’re feeling good, I’ll rip it the whole way home.”

Camille Lejeune (30th): “It’s less technical than some of the French courses, which have no terrain so need to use twists and turns to make it difficult. Here, the ground does it.”

Richard Jones (33rd): “I think it’s an incredibly brave move by Captain Mark Phillips to do what he’s done. There’s no way out of jail at the Dairy Mound — if your horse isn’t a true four-star horse, I can’t see a way home there. It’s a very, very clever horse, and you’ll have to ride with your head, not just thinking of the minute markers.”

Esib Power (37th): “It’s built for my horse — he’s never been off the bridle yet on any course. He might look like a child’s pony in the stable, but he’s a naughty little brat — though on a good day, he’s a pleasure to ride cross country. He’s a different league than anything I’ve ever sat on — he wasn’t a slow racehorse; he was a winner on the track.”

Ben Way (42nd): “It walked better than I saw on the preview. There are plenty of places where he’s given an option where he didn’t necessarily need to, which will be interesting. Then you’ve got a long gallop up the hill, and nice, plain fences cruising downhill all the way home. I’ll be trying to make use of Galley Light’s Thoroughbred-iness. I’ll give him some early long routes to give him confidence — he’s not an ignorant horse, and he needs some hand-holding.”

Polly Jackson-Griffin (45th): “The ground is a massive thing here — very undulating and hilly with a big hill at the eight minute marker, and then the jumps actually get bigger!”

Imogen Murray (54th): “It’s big, and it’s bold, and it should suit Ivar Gooden. He loves to gallop — if it was a fourteen minute cross country, that would be perfect!”

Katie Preston (55th): “This course has got my horse’s name all over it. He’s a horse who looks for the flags, and at every point, the horses can see them. There are no tricks. I’ve never gotten to the bottom of his stamina before — he’s a Thoroughbred, and the perfect Burghley horse.”

Tina Cook (62nd): “It’s very similar to last year in many ways. There are a lot of wide fences, which will be quite energy sapping. The technicality is varied in places, but has been upped in other areas, like the Maltings. If you take on the oxer and get it wrong it’s very fiddly, and you could be up there half an hour trying to find your way out! We’ve got enough combinations early on, and the Leaf Pit early on, which will catch people out. By the end of the course, though, the simple fences will still be difficult, because the horses will be tired.”

Michael Owen (65th): “The Trout Hatchery will come up thick and fast, and the Rolex combination at 15abcd with its Vicarage Vee replica, too. This place can catch you out anywhere with the terrain — you or the horse can lose focus at any time. You’re not clear once you get past the Dairy Mound, either — the horses can, and will, still tire. Some of the long routes won’t waste any more time, so you need to have done your homework and have a plan A, B, and C for each one.”

Dickie Waygood (Team GB Performance Manager): “It’s incredible — the horses will love jumping off this ground, and the fences are beautifully dressed.”

Cross country begins shortly at 11.00am BST/6.00am EST — follow our links below to follow along via the live stream and our Twitter feed. The marvellous Jenni Autry will be spearheading the live updates thread right here on EN — don’t miss a second of the action!