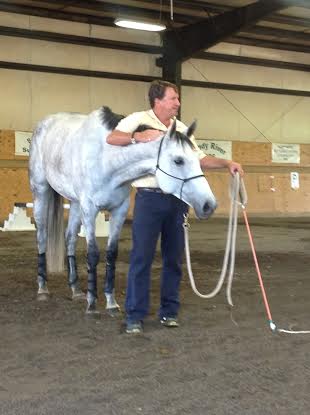 By “online,” I don’t mean on the internet. I mean on an actual line — a long, heavy rope attached to the horse’s head via a rope halter. Controlling the horse’s movements on the ground both establishes the human as the herd leader — vital, unless you’d rather a 1,000-pound animal with a brain the size of a walnut be the boss of you — and gives said human some really useful tools to calm the horse when it’s stressed; lead the horse into places it would rather not go like a wash stall, trailer, etc.; and introduce it to all sorts of jumps, including ditches, water and banks, without the added stress of a rider.

The first morning of O’Connor Camp is always devoted to this very specific type of groundwork. David lectures, and then he demonstrates, and then he and the other instructors — in this case Karen O’Connor and Cathy Wieschhoff — help the campers try it with their own horses.

The principles of groundwork are not difficult to learn, but so much of their success depends on timing: on exactly when to put pressure on a horse and when to release it. You can’t learn the timing aspect overnight — every horse, in every situation, is different, so it takes practice. Turns out David is a holy master of timing.

I knew this already. I’ve been to camp before. But as I watched him working with a 4-year-old OTTB mare for the very first time while at the same time lecturing to an arena full of campers, I felt a very deep satisfaction. It is so fabulous to watch a person earn an animal’s trust and respect so deeply, so quickly. It gives you a sense of possibility. It give me a feeling of joy.

My horse, Sarah, is an old hand at rope work. When I worked her in the ring along with my fellow campers, the instructors barely paused to speak to me. Midway through the lesson, I realized that while I’ve been to camp many times, Sarah never has been. But she fully understands this sort of communication because I find it useful, and I taught her. That gave me a nice sense of satisfaction, too.

Later in the afternoon, while former international groom Sam Burton Hanley lectured the camp about bandaging and leg care, David came into the barn. He added some of his own thoughts on bandaging, then quickly put a polo wrap on the demonstration horse. Now, I know that probably all major international-level riders are good at polo wrapping their horse. I’m sure that part is quite normal. But I do wonder how many international-level riders so clearly enjoy teaching polo wraps to a bunch of teenagers and adult amateurs.

The odds that any of us at O’Connor Camp end up on one of the High Performance lists, to earn teaching by U.S. Team Coach O’Connor, are mighty close to zero. Yet David enjoys teaching us. He cares whether or not we learn. This is pretty cool. I try to find a parallel in other sports — Tiger Woods? Rafael Nadal? I don’t know those men, but something tells me it wouldn’t be likely.

So that’s the story from the first day of O’Connor Camp. David O’Connor rules.