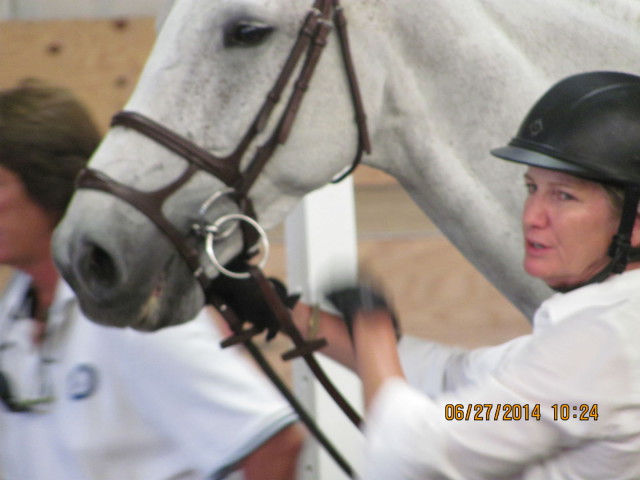 So, I’ve been back from O’Connor Event Camp for two weeks and I still haven’t written about that Thursday.

Thursday is cross-country day. It’s far and away my favorite day at camp. This year I made a big mistake and very nearly hurt my horse, and also myself, and I was angry with myself for a long time.

That didn’t have anything to do with the camp or the instructors; it had everything to do with me and my riding. I own it. I just didn’t know how to write about it. Yesterday my daughter and I schooled our cross-country jumps at home, for the first time since camp, and I think I understand now not so much what I did wrong – I knew that right from the start – but why, and what I need to do to fix it, besides, of course, not ride like such an ass.

That all sounds perhaps more dramatic than it should. I’ll go back to camp. On Thursday morning the instructors – in this case Cathy Wieschhoff – worked horses with specific issues over cross-country fences online.

The first year I went to camp, my horse Gully had a water issue, until David sent him out on line. Gully batted his sweet eyelashes at David and begged to know how David would like him to enter the water: walk, trot, or canter? Over a jump first? Out over a jump? It took about five minutes for Gully to do everything possible in, out, and through the water complex, and I was steaming, except that I was also really glad. We never had trouble at water again.

This year Cathy worked several horses over ditches, one up and down a bank, and two through water. Educational and entertaining. Then we all got into our gear and headed back out to the course to ride. Ditches, banks, water – our groups rotated through. Cathy and Karen O’Connor used show jumps to create small complexes; the ditch, for example, became a coffin.

My mare, Sarah, was all that and a bag of chips, as usual, but we weren’t quite together. This puzzled me; we’d always felt more together before. With her injury and subsequent rehab I’d barely jumped her since Florida, but in Florida, back in February, we’d felt really fine. Some of my best cross-country ever. On Thursday at camp, right from the start, this wasn’t true. It wasn’t awful, but it wasn’t right.

Then we went to the bank. After a few simple up and downs, Karen asked us to jump a cabin, four strides to a small (maybe 2′) up bank, one stride to a larger (2’9″?) up bank, down a ramp and away yonder to a keyhole, and that’s where I screwed up.

Coming up to the cabin, I pulled Sarah in at the last moment. She jumped, but without energy. I sort-of kicked, she scrambled up the first bank, lurched forward, got her front legs onto the second bank, and slammed her stifles onto the edge of it, hyperextending both legs. Somehow, because she’s strong and sturdy and doesn’t panic, she managed to pull her hind legs up beneath her. We found a canter and lurched over the keyhole jump.

It was beyond ugly; it was frightening. It wouldn’t have taken much for Sarah to have slid backward off that bank. Karen was furious, but I can’t remember a single thing she said; I was too busy screaming at myself inside my head.

Eventually we tried again and were better, but not great. Then we went down to the water and I finally pulled my head out of the fog and rode, and all that went well.

Back at the barn, my fellow campers surrounded me with help, affection, and the cold hard truth. They gave Sarah arnica and bute; they gave me a glass of cold white wine. “Wow,” they said, “you really screwed up. That was entirely your fault.”

The staff at Sandy River gave me ice for Sarah’s legs, and let me turn her out overnight. All night I dreaded finding a lame horse in the morning, but I didn’t. She was completely, jauntily, fine.

As I said, yesterday I finally understood. I knew I’d gone wrong by taking back too much and way too late; what I didn’t know was why I’d felt like I needed to do that. Turns out that now that Sarah is both sound and fit, her throttle has a wider range of motion. I say go, and she goes faster than she used to; I say whoa, she slows up more than before.

It doesn’t excuse my bad riding but it helps me understand it; I need to practice making more subtle cues. My daughter also thinks I’m waiting until too close to the fence to balance Sarah; I need to get that done earlier so I can ride her forward the last several strides. I think that’s also true; luckily, I have lots of jumps at home for practice.

Luckier still, I’ve got a good horse, still sound and happy despite her rider. This isn’t much about OCET camp, I know, but it’s what happened at camp, and what happened to me.

To read my almost-daily blog, which isn’t always about horses, click here.