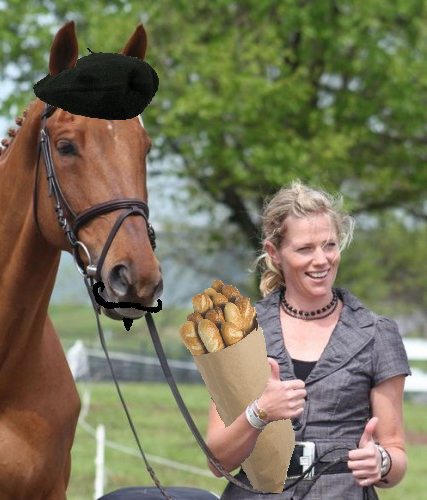 We announced the final four contestants on our Fourth Annual Blogger Contest on Tuesday, and now we’re bringing you their entries hot off the press. All entries will be posted without editing for fairness’ sake. If you have feedback, we’d love to hear it! Post it in the comments below.

Be sure to check out the bios from each finalist here!

The USEF Selection Committee has broken their silence and named the team slated to be shipped out to Normandy. While they made it sound like they took things like decent dressage, clear cross country, speedy stadium and soundness into consideration for this decision, we’re fairly certain that there were a number of other important things on the table. Fernhill Fearless (a scanty 16.0 hands) with his petite rider Kim Severson (topping out at 5’3) are the pair most likely to fit through a hula hoop should such a question arise. Conversely Donner, at a monstrous 17.1, would be better nicknamed the flying moose and can certainly reach the peanut butter on the top shelf at the supermarket should anyone be craving a late night snack in France. Ballynoe Castle RM has recently come out as an excellent wedding planner and made an appearance at his groom’s ceremony, this experience certainly made him attractive since he can organize the competitor’s party. Trading Aces has been reported to do an excellent impression of a certain Sesame Street character and was likely included for his value as comic relief. However, we think ultimately the reasoning behind each choice went something like this:

We needed someone who speaks french. With a team populated by Irish horses, an American and one furiously proper German, Manoir De Carneville was a necessary addition to the team so he could help us navigate his motherland. While his teammates wander around lost and agog of coastal France, Tate will be rolling his eyes and tipping his beret at the locals in apology before herding everyone in the right direction. Don’t ask him how to order another pain au chocolat, he’s trying to cut down on the sugar and will expect you to do the same.

There’s no party worth attending unless the Irish have been invited. Trading Aces, Fernhill Fearless and Ballynoe Castle RM hail from the island of all things rainy, green and hangover inducing, and you simply can’t throw an international party without a pack of Irish dudes to keep the fun rolling. Sparky brings the tall drinks to the table and despite suffering from short man syndrome also brings the laughs, Reggie makes friends with everyone in the bar and ends up buying the rounds, and Oscar quietly nurses his Jameson in the corner until someone wants to scrap in the parking lot at which point he kicks everyone’s butt in the name of the USA, and then orders another drink.

Since Tate is french and doesn’t operate on any kind of functional schedule and Reggie, Sparky and Oscar can’t be trusted to remember their ride times when they were probably at it all night at the competitor’s party, we needed a rigorous German raised up on the efficiency of the Swiss to keep the team in line. Shamwari 4 was the natural choice here, who, despite the fact that he’s been caught associating with an aussie lately, operates like a well oiled Hanoverian machine and will quietly disapprove of his disorganized teammates until they are guilted into getting their act together from his sheer aura of organization and determination.

This is the American team isn’t it? To round out the ‘ol stars and stripes, we needed a home grown Captain America to join the ranks and carry the team. Donner is the more than capable glue to hold this team together, and much like Steve Rogers of the Avengers, he has the handsome face and charming personality to keep the many different players working together. Shammie frowning extra hard at Tate for fooling with his perfectly groomed mustachio for too long before the first jog? Donner swoops in to diffuse the situation. Oscar getting his grump on because Sparky has talked about the distance to the keyhole from the uphill skinny for the tenth time? Donner is there to change the subject to the second water. Bravely forging the center line in the face of a big atmosphere and worldwide pressure for success, Donner can keep his cool while internally bald eagles are singing the national anthem to the glorious chime of the liberty bell. Go USA! Go Eventing!