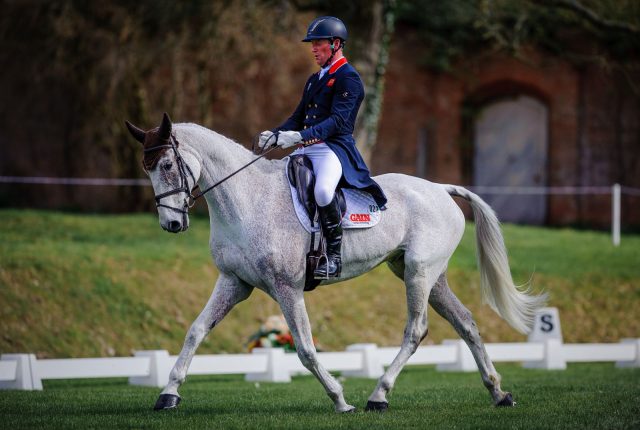 Leading margins were squeezed and occasionally overturned today in Scotland at the Land Rover Blair Castle International Horse Trials. Oliver Townend has the dressage lead in both the CCI4*-S and CCI4*-L. Representing the U.S. in the short format is Caroline Martin, who is 9th with Redfield Champion and 14th with Islandwood Captain Jack. Saturday is cross country day for long-format competitors (beginning at around 3 p.m. local time), followed by show jumping on Sunday; short-format competitors show jump tomorrow and take on the cross country track on Sunday.

The four-star long format was completed yesterday, so #1 Oliver Townend and #2 Tom McEwen retain their considerable advantage over the field. Oliver shared his thoughts about the leader, Cooley Rosalent: “She’s only eight and I’ve been in love with her since she was four-years-old. She will be a beautiful five-star horse in time. This weekend is a speed bump, and hopefully a learning curve. She’s got a wonderful brain and so much talent.”

Before Ballaghmor Class entered the arena, first to move ahead of Tregilder was Pippa Funnell riding Maybach (27.6). Her lead was short-lived, France’s Astier Nicolas taking the top spot with Babylon de Gamma (26.0) while next up was China’s Alex Hua Tian and his long-term partner Don Geniro who slotted in between Astier and Pippa.

Ballaghmor Class performed a smooth, accurate test to finish the day at the top of affairs with a mark of 25.0.

“He was very good,” said Oliver after his test. “He’s not tuned up at all at the minute, he’s just going through the motions. We always like to build him up to the big occasion and I’d say there are another six marks to come off. One phase at a time, but I think I will run him across country on Sunday. We are still four weeks away from the Worlds, and if it was Burghley four weeks away I wouldn’t think twice about running.

“Blair is an exceptional prep run ahead of Pratoni (the World Championships venue), second to none with the ground and terrain here.”

Illustrating how busy Oliver has been this weekend – he has brought nine horses – in just the four-star short-format he lies in first, fifth, sixth, eighth and ninth.

No change at the very top of this section, but Tom McEwen and Brookfield Cavalier Cruise’s leading margin has been reduced. Coral Hardman and Impuls V have slipped between Tom and Sam Ecroyd, 3.6 penalties behind Tom.

Similarly, Storm Straker and Fever Pitch separate Sam’s two rides, Withington (28.6) and Chapel House (29.1). Jo Rimmer and Chilli’s Midnight Star complete the top six ahead of tomorrow’s cross country phase, which is due to start at 11.30am.

Caroline Powell has also retained her overnight lead, but again with a narrower cushion. Tik Tok lies on 26.5, Lucinda Atkinson and Twice Proved are on 28.2 with Wills Oakden and Keep It Cooley breathing down their necks on 28.3. Another 0.1 behind Wills is, you guessed it, Oliver Townend, this time riding Dolmen Debenture. Cross country starts at 8am.

In Section E, Amelia England came close to holding on to the top spot, but Max Warburton narrowly slipped ahead, riding Morningstar Van Altrido to a score of 28.8, 0.2 of a penalty ahead.

Blair is never a dressage competition so the leaderboards could look very different by tomorrow evening!