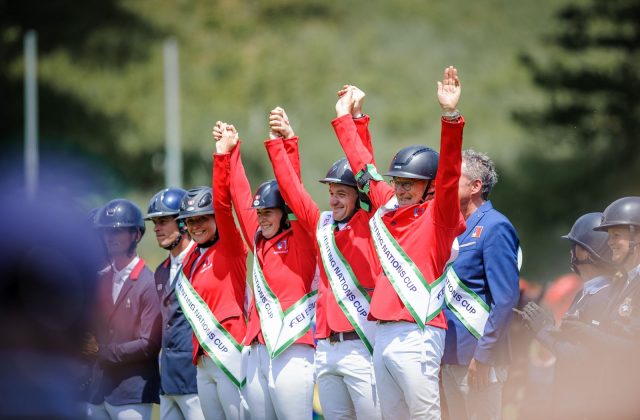 The Swiss team takes Nations Cup victory in the Pratoni test event in May. Photo by Tilly Berendt.

Switzerland is the latest team to reveal their five-strong line-up for next month’s FEI World Championships for Eventing, and it comes after what has been an extraordinary season for the developing nation. They began their year with a decisive double victory at the Pratoni test event back in May, taking top honours in the Nations Cup competition and also scoring an individual victory, claimed by Robin Godel and the excellent Grandeur de Lully CH, who competed at the 2018 World Equestrian Games. The team followed that victory up with another win in the Avenches leg of the series, where Robin and Grandeur de Lully once again topped the bill — and the Olympian, who turns 24 today, has also enjoyed a CCI4*-L victory at Strzegom this season, riding Global DHI.

Robin and Grandeur de Lully will be joined on the squad by team stalwarts Mélody Johner and Toubleu de Rueire, who’ve only finished outside the top ten in three of their international runs as a partnership, and were 17th individually at the Tokyo Olympics, and 22-year-old Nadja Minder, who was part of that winning Pratoni team in May, delivering two of the seven clear rounds inside the time, made her CHIO Aachen debut in July, who will be making her senior team debut next month with Toblerone, the horse with whom she contested her last Young Rider European Championships in 2021. Rounding out the team line-up is perennial success Felix Vogg, who has the luxury of choice between two horses: Cartania II, with whom he was eighth at last year’s European Championships, or Colero, with whom he won Luhmühlen CCI5* this year.

Switzerland’s swift ascent over the last few of seasons has much of its genesis in the appointment of New Zealand’s Andrew Nicholson, who joined the squad as cross-country coach in 2018, with the intention of training them through the European Championships and helping them to secure a spot at the Tokyo Olympics. Though they didn’t ultimately nab their berth there, they managed it by the end of 2019 through Nations Cup successes, and since then, Nicholson has stayed in situ as a lynchpin of the team. The results are self-evident, whether looked at on paper or in the flesh: Switzerland’s riders and horses have always had all the raw materials and talent to be truly great, but it’s with Andrew at the helm that they’ve learned to achieve success not by playing it safe, running slowly, and waiting for other teams to make expensive mistakes, but instead by taking clever, calculated risks and training for all the possibilities on course. Now, we’re enjoying a real renaissance for the squad, who have come into 2022 with the bit between their teeth and a palpable desire not just to participate on the world stage, but to win. This will be a seriously exciting team to watch in Pratoni, where they’ll be aiming to try to capture Switzerland’s first-ever eventing World Championships medal.

The final line-up for Pratoni is as follows:

The individual rider will be: