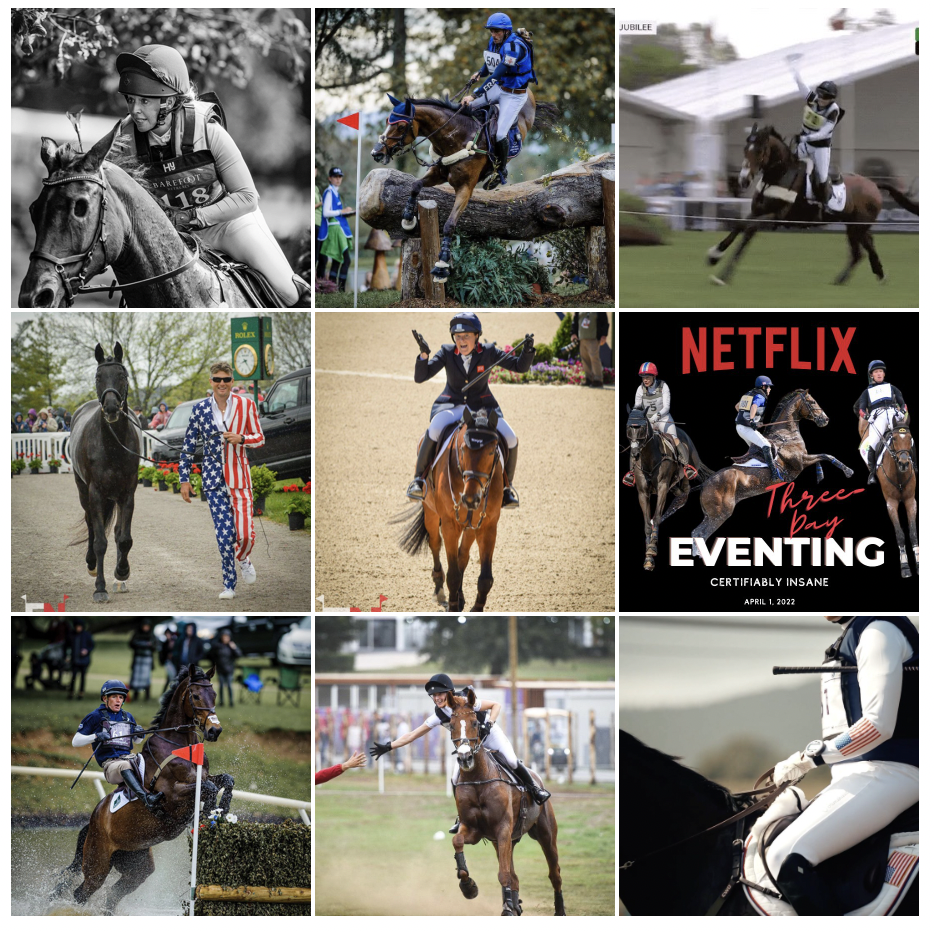 We could spend hours sifting through our own content, picking out our favourites stories and photos from our extensive annual oeuvre — but EN is all about you guys, the fans and the heartbeat of the sport, and so we’re much more interested in what you loved this year. We’ve been sharing your best-loved stories over the past couple of weeks across our social media channels, but today, we couldn’t resist diving into our Instagram stats to find out which nine photos made the biggest impression — and why. Here’s how the year stacked up on the grid.

Caption: “Never tell an eventer they’ve got limitations — because as one-eyed Viscera and her gutsy pilot, Sweden’s Therese Viklund, prove, there’s no such thing. They finished fourth in Houghton’s jam-packed CCIO4*-S today with one of the fastest rounds of the day 💪🏼”

At a whopping 20,752 likes, this black and white snap of Therese and her one-eyed wonder, Viscera, inspired everyone in May — whether you ride an unlikely champion yourself or simply love to cheer on the underdog. The fourteen-year-old Hanoverian ultimately finished fourth at Houghton, her first FEI event since a trip to the Tokyo Olympics the year prior, after which she sustained suspensory injuries that required a slow recovery process. But as always, gutsy Viscera and her devoted rider came back with a bang, and although Therese has decided to focus on taking the pressure off and having fun around CCI4*-S tracks, they’ve certainly not lost their edge. They were among the fastest combinations of the day, adding just 1.2 time penalties in the tough Nations Cup competition.

The dressage-bred mare has had an unusual trajectory; she was rejected as a prospect for her intended discipline because it was felt she wasn’t a good enough mover, and then had a foal quite young before joining Therese’s string as a six-year-old as a sales prospect. Three years ago, the now fourteen-year-old had her left eye removed after a two-year battle with uveitis, and in the years since has picked up a number of four-star placings, several team spots, and a trip to last year’s Olympics, seemingly without missing a beat.

“From day one, it’s like she hasn’t noticed. She’s very confident, so I think that helps a bit, but she just thinks she knows it all and just does it. I’m so impressed with her — every time she does the cross-country, she’s so straight,” says Therese, who suspects that the mare’s sight had begun to wane prior to the removal of the eye, indirectly helping the transition process. “I’m thinking, ‘is it harder to have the flag on the left side or the other side?’ but she’s so straight between my legs that she just goes for it either way. She’s the bravest little horse.”

Caption: “Save of the day, or save of the season?! 🤯 France’s Sebastien Cavaillon sticks a serious one with Sarah d’Argouges at Pau, and will go into the final day in the top 25.”

There’s nothing quite like a five-star to bring the inner superhero out of riders — and when his longtime partner Sarah d’Argouges did what so many horses in the field did at Pau and hung a leg while jumping the second of two hanging logs after the final water crossing, Frenchman Sebastien Cavaillon temporarily put the laws of gravity to the side and found his way back into the saddle. Sarah, for her part, continued following the track downhill, at speed, and around the turn, keeping her focus on her job and her head up, allowing her rider to scramble back upright. We’d love to know what core exercises Sebastien works through in the gym — and 6,783 of you agreed. That, or you, like us, just loved how well his Willberry Wonder Pony stuck out the ride, too!

#3: Laura Collett celebrates — or gently loses her mind, tbh — in this mad GIF after a clear round inside the time at Badminton with London 52.

Caption: “That @bhorsetrials finish line feeling — especially when you’ve stopped the clock inside the time to hold your lead! @laura_collett is on cloud 9 after a scrappy ride around what she called a 6* cross country with her Tokyo partner, London 52. #goeventing“

Laura Collett’s Badminton win in May felt like the stuff fairytales are made of — she’d persevered even through a tough, educational year in 2019 with the extraordinary London 52, and that was after sustaining a laundry list of injuries in a horrific accident aboard another horse while out eventing in 2013. Though she’s only got 10% of her vision left in one of her eyes, she’s gone from strength to strength over the last few years and has become a real poster girl for aspiring competitors who need an idol who proves that you don’t have to have it all to, well, have it all. When she celebrated after crossing the finish on Saturday, we all celebrated with her.

Caption: “It was a drama-filled jog this fine, rainy Sunday but at least @boydmartineventing came to party…or something.”

You can always count on Boydo to make a fashion statement (I mean, who didn’t Google kitty Christmas jumpers after his holiday post on social media?), and on the final day of Kentucky this year, he…really made one. The star-spangled suit of dreams (nightmares?) was made worth it purely to see Tsetserleg look more embarrassed than we thought a horse could actually look. We reckon next time, he’ll be begging to be dropped off around the block and left to do the trot-up on his own. Ugh, you’re so embarrassing, dad!

#5: Pippa Funnell and her five-star debutant Maybach deliver the goods on the final day at Kentucky.

Caption: “That feeling when your horse jumps double clear on the final day in his first 5* 🤷‍♀️”

No matter how long we all spend in this profession, we’ll never stop idolising Pippa Funnell — and it’s not even really because she’s a total bad-ass on a horse, although she certainly is that. Instead, it’s really because, despite being very open about her lifelong battles with confidence wobbles, she always seems to be having the most fun with her horses of just about anyone we know. That was exemplified on the final day of Kentucky, when she and her first-timer Maybach made it happen, earning themselves a sixth-place finish and cementing the 12-year-old as a real one-to-watch for the years to come.

Caption: “Have you heard?? Hot on the heels of the success of ‘Formula 1: Drive to Survive’, Netflix has a new show on its roster. Tap the link in our bio to see more! 🤔😉 #goeventing“

Sorry, folks. We wish we didn’t have to do this stuff to you, but lying to you on the morning of April 1st is a tradition, and we love our traditions here at EN. Our Netflix eventing series might not have been real, but we wish it could be — and we’re quietly hoping that maybe some savvy documentary producer will see how much you all wanted it and jump on the bandwagon of our little pocket of insanity.

#7: Great Britain’s Andrew James sits a long one through the water at Houghton Hall.

Caption: “A treatise on strides: you can’t always get what you want, but if you try sometimes you just might find you get what you need. Thanks, Mick Jagger (and Andrew James and Celtic Morning Star)”

In eventing, there’s rarely such a thing as a Plan A that goes off without a hitch — and sometimes, when things go a bit pear-shaped, you’ve just got to get in the back seat, keep your eyes up, and trust in our eventing overlords (and a very good horse) to see you through to the other side. Andrew James exemplified that approach when his horse, Celtic Morning Star, saw the long one in the water at Houghton Hall CCIO4*-S in May, and his trajectory through was a (comedic) masterclass in how to remove interference and let your horse sort himself out.

Caption: “Teamwork: it does, in fact, make the dream work 💪🏼 German pathfinder Christoph Wahler slaps a high five on second out Sandra Auffarth as she crosses the finish line with her Aachen champ, Viamant du Matz 🇩🇪”

Months later, I’m still in awe of Shelby’s impeccable timing when she got this super shot of German team anchor, Christoph Wahler, darting out of the crowd to high-five second-out Sandra Auffarth as she zoomed through the finish on Viamant du Matz. Neither knew, at that point, that the weekend would end with them standing proudly atop the team podium with gold medals around their necks, but they definitely knew that their incredibly solid rounds had paved the way for the rest of the team to confidently tackle the challenges to come. Seeing the once-dominant German team return to its very best was a cool moment, and watching Christoph lead the way in his championship team debut was even better. A star is born.

#9: Cross-country day at the FEI World Championships at Pratoni — immortalised in one heck of a reel.

Caption: “Well, THAT was a cross-country day! We’re coasting through on the afterglow — so join us to relive it all over again 🤩”

This year, we were delighted to welcome German media superstar Juliane to our team in Pratoni, where she created reels throughout the competition that somehow packed ALL the excitement, drama, and emotion into under a minute a piece. You loved all her work — and so did we, as we rewatched them over and over again in the press office and at our Italian party villa — but cross-country day was a definite stand-out. Point very much taken: we all need more Juliane in 2023!

Catch more behind-the-scenes shots, stories, inspiring images, video interviews and reels, and much more on our Instagram — and, as always, Go Eventing!