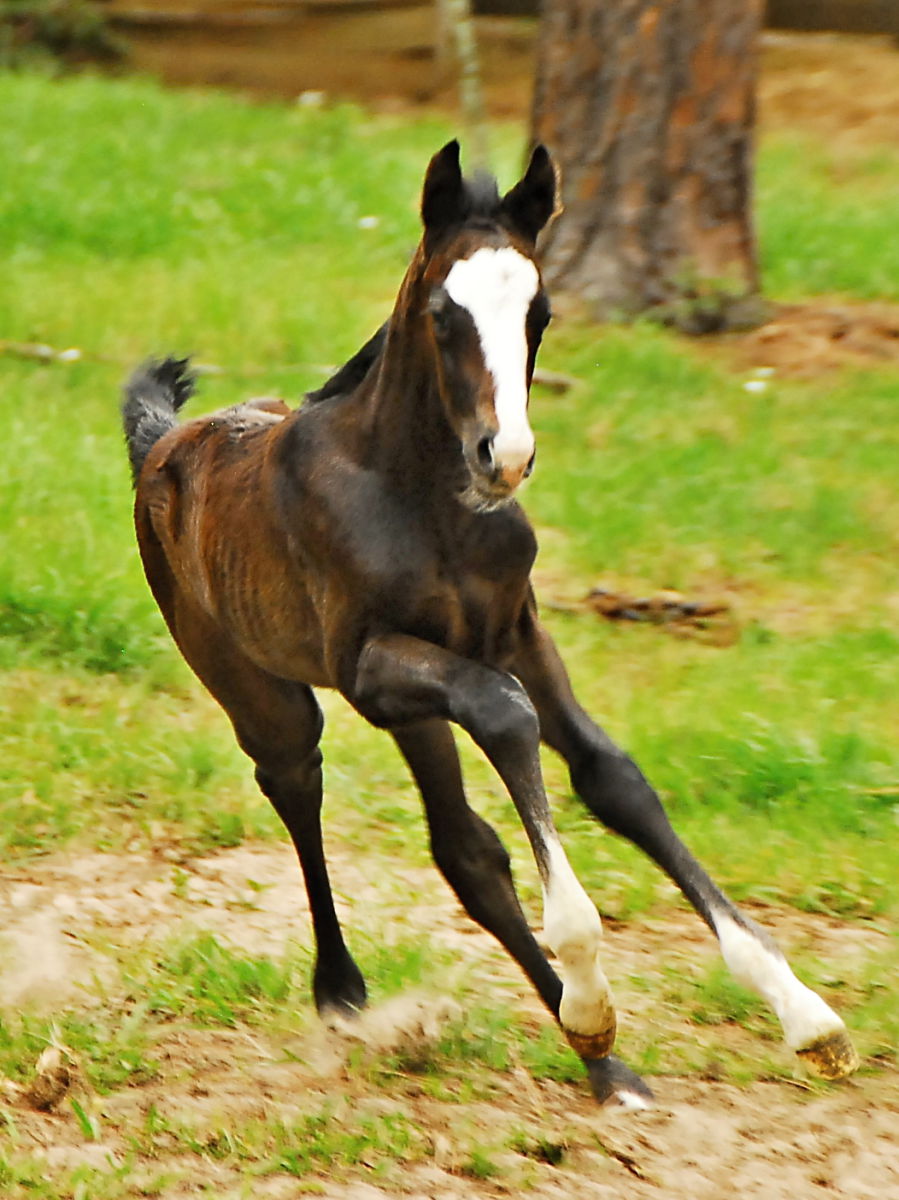 “Remember, you said I get to name him!” my husband said, “Whatever name *I* choose, you have to call him that!”  We’d made an agreement: he was allowed to give the foal a barn name, I got to pick the show name.

We moved quickly but quietly in the barn, turned on the light and brought the foaling kit.  I wrapped her tail, where two tiny hooves appeared.  My mare looked up, wondering why the hell her belly hurt so much and what was going on back there.  We stood back and watched a few moments as she strained and pushed, but didn’t seem to get anywhere.

“I’ll check her,” my husband said.  With years of foaling experience on TB farms, we both knew what was normal and what was not.  But it’s so different when it’s YOUR mare!  She got up again.  My husband tried to approach her hind end but she was restless, nervous, upset, and he didn’t trust her (he doesn’t trust her much anyway, as a rule).  After years of running intermediate and a few advanced events together, I knew her and trusted her. Not waiting for a pair of gloves, I reached in. My heart was in my throat.

I felt front legs, a nose, a chin, and jawbones.  A jaw where the forehead should be.  The foal was twisted.

To make matters worse, my cell phone– with the vet’s phone number– was dead.  My husband went to the house to plug it in and try to call the vet.  My mare was down again, and rolled.  I got her up and got her moving.  Walking her around the yard, it gave the foal a chance to slide back down a bit and re-position.  It doesn’t always work, but it was worth a try.

I brought her back to her stall where she promptly went down again.  I reached in and felt the nose and a forehead. A forehead: SUCCESS!  I helped pull as she pushed, and my husband grabbed a front foot as well.  Finally, he was out.  A fancy dark bay colt with a brilliant white face and three white feet.  He whimpered a shrill little whinny, and my mare’s head shot around– What Was THAT?!  And then she nickered back, the deep calming voice that every mare says to her newborn, the nicker that tugs at your heartstrings no matter how many times you’ve heard it before. 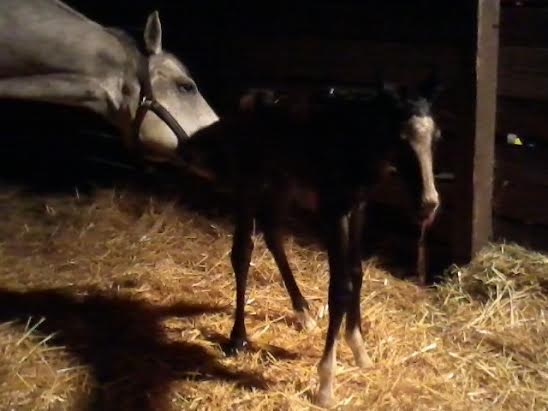 Of course, that was just the beginning.  We still had to get him up and nursing, a chore my maiden mare was not so thrilled about.  After a few tries, though, it seemed they got the hang of it.  After re-bedding the stall, we left them alone to rest, and get a couple hours sleep ourselves. After he was fully dry, you could see a tiny, faint rim of gray around his eyes, and he lacked the mousy brown color of a true bay.  Sadly, the pretty dark bay was not going to stay: Harley would eventually be gray like his mom. 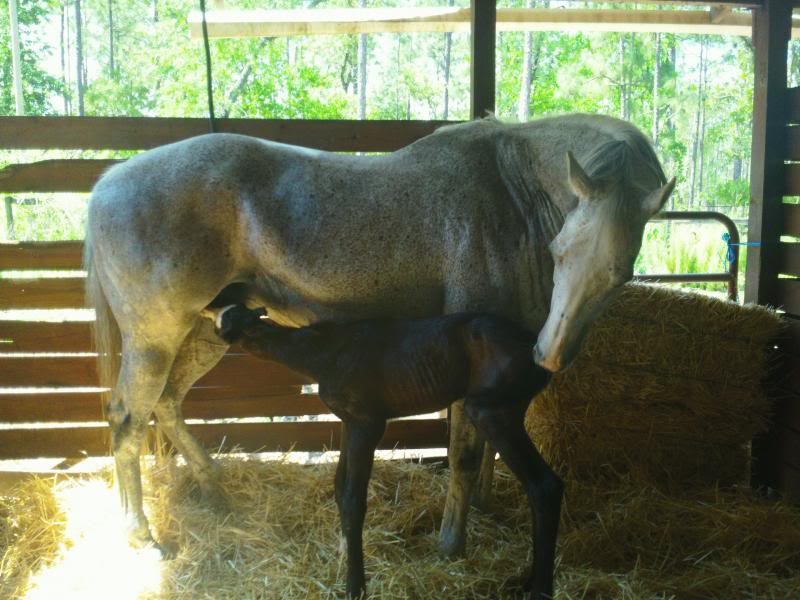 When I went out at a more civilized time to feed, I found Harley sleeping quietly with my mare standing watch over him like a guard dog. She’d hardly eaten any hay, and grabbed her grain by small mouthfuls only when he wobbled near her food pan.  She would not leave his side, and stared high-headed over the stall walls looking for predators– you never know when wolves or lions might attack!  Thankfully, her protective instincts did not extend to people, and she was quite cooperative for us to handle him. 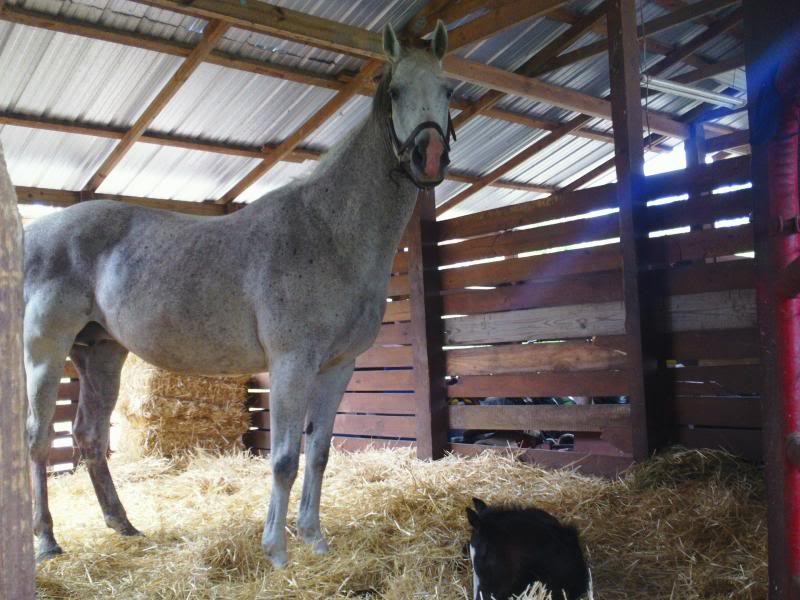 The vet came out later that day to do an IGG test– to make sure Harley had received proper antibodies from colostrum.  Unfortunately, due to her leaking milk the few days prior to foaling, Harley’s IGG count was very low.  The timeframe to administer extra colostrum was rapidly closing, and we decided to give him plasma to be on the safe side.  It’s a bit expensive, but really just a drop in the bucket when you look at the whole cost of breeding.  Harley was always healthy and active, and I’m glad we kept him that way. 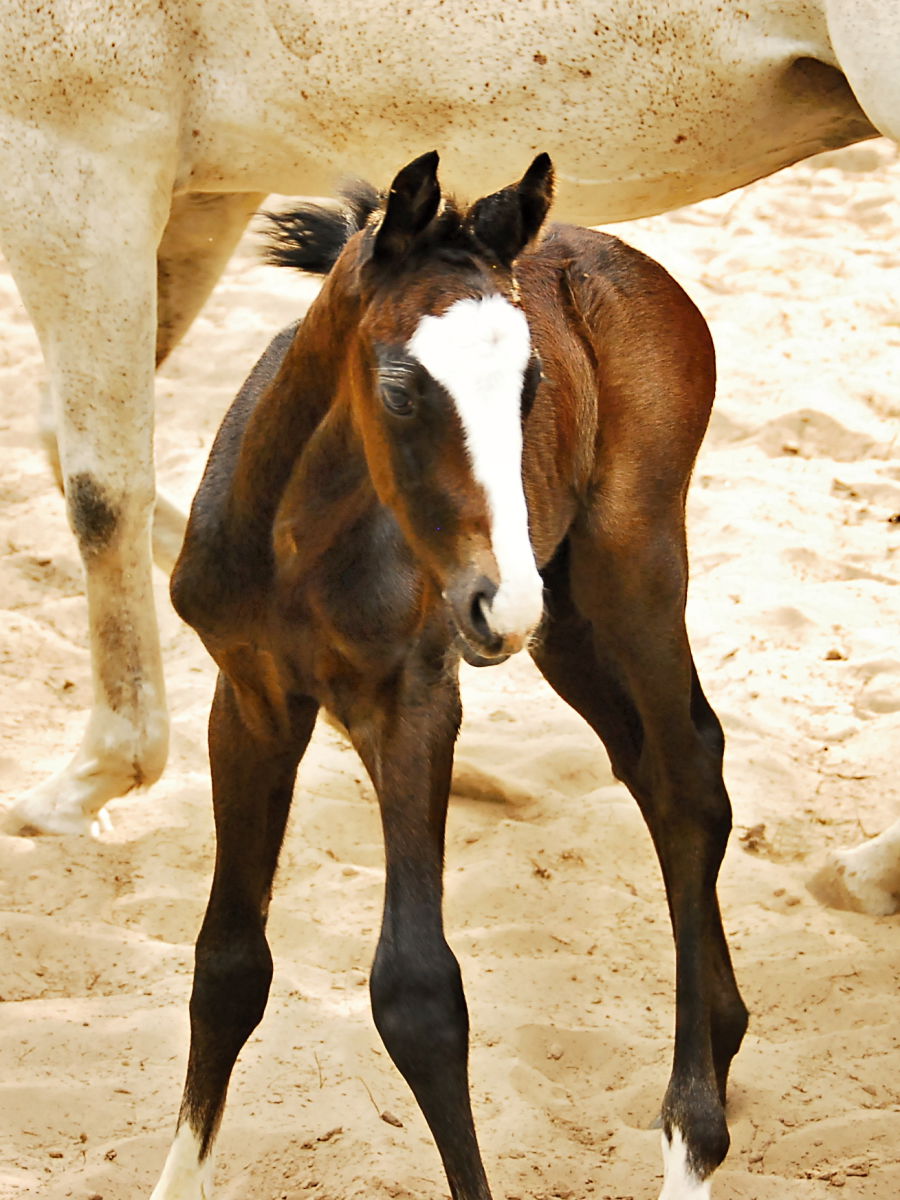 As with most foals, Harley came out all kinds of crooked.  He was very knock-kneed, a little upright in front, and a little down in the pasterns behind.  Being all balled up for 11 months tends to make a long-legged creature look like a pretzel, so there wasn’t too much to worry about just yet.  I did limit his turnout a little the first month, just to make sure he didn’t stress those crooked legs and make them worse. 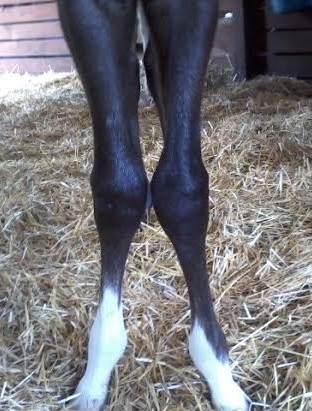 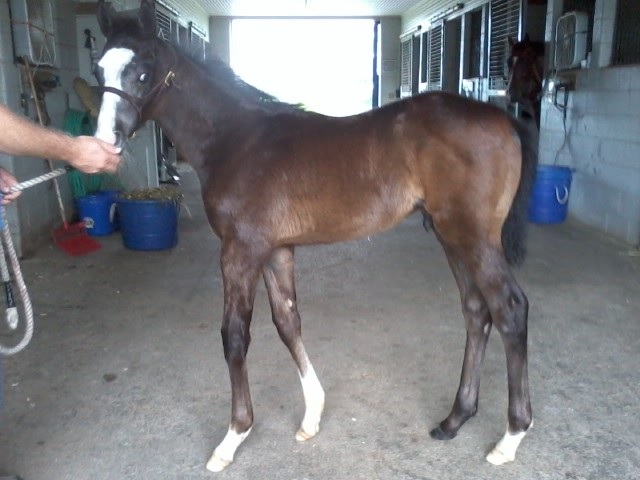 As Harley grew his legs slowly straightened out on their own, with some regular farrier work.  He had some ugly growth spurts, as they all do, but he’s turning out pretty nice.  Breeding is always a crapshoot, and the first thing you want is a healthy foal and mare… then you start hoping you get what you wished for in that master plan a year ago.  Still, you won’t know the true success of your matchmaking until several years later. 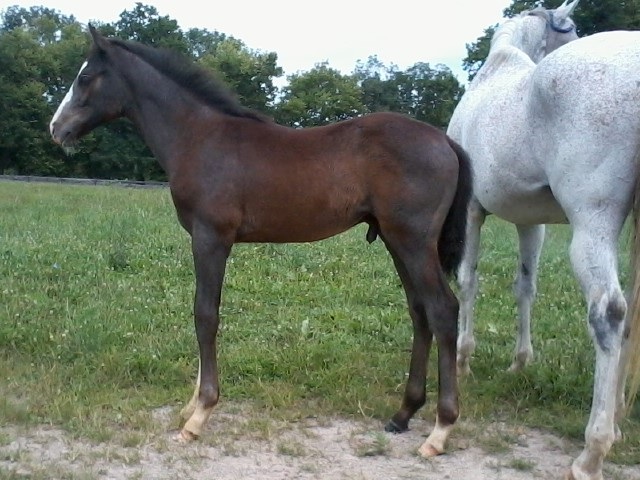 About three months old– legs a little better, and that bay baby fuzz is growing out.

Harley has been a good colt with a fun personality, pretty easy to work with from the very beginning.  He learned to tie at feeding time around two months old, and cross-tied by six months.  He leads respectfully at walk and trot, stands for a bath, and loads on a trailer.  I’ve ponied him off my Training level gelding, and he’s been body clipped twice (like a pro!).  I don’t overhandle him, though, and he gets plenty of time to be a horse with his grown-up friends.  He plays pretty rough, but the old guys let him know when to knock it off. 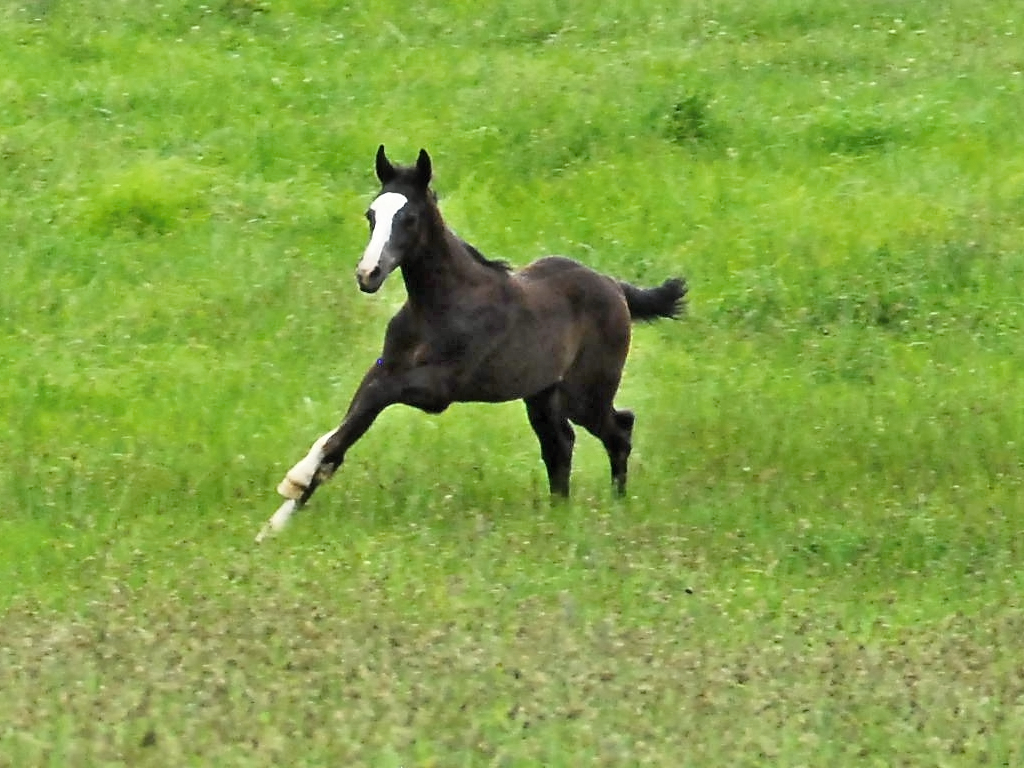 There’s still a lot he has yet to learn, and there’s still much to prove before I know if my decision to breed was ultimately correct.  As my husband likes to point out, it’s definitely cheaper to go buy a four-year-old OTTB (that already is broke to saddle and proportionately grown!) than it is to breed, foal out, and raise a youngster who may not turn out at all what you want.  But I cannot put into words the pride at watching your baby– your planning, your hopes and dreams, out of your favorite awesome mare– grow up before your very eyes.  It’s all worth it, to me. 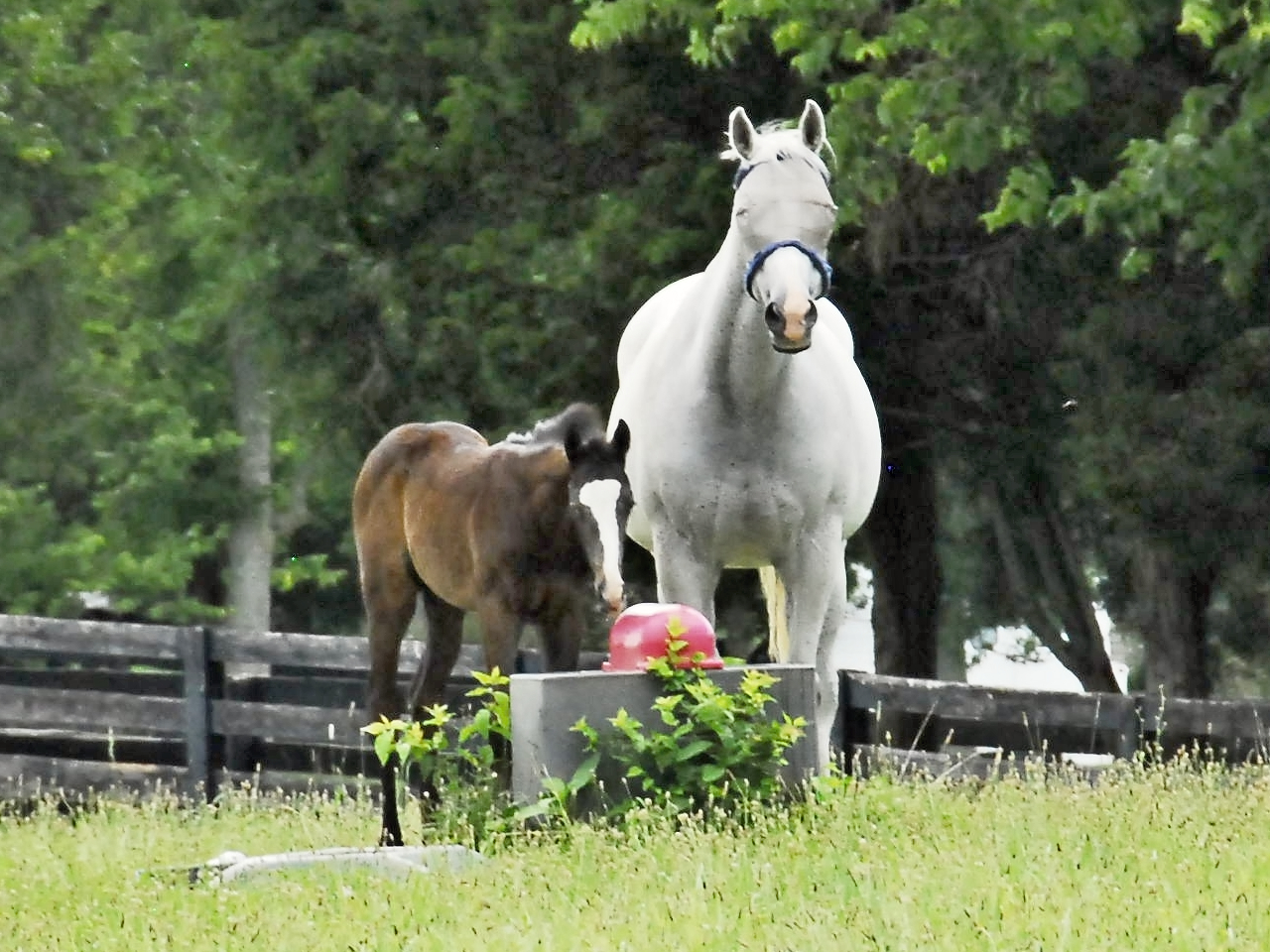 I try very hard to be objective and not “barn blind” when evaluating my horses, and especially Harley.  I’m ultra critical…does he move well enough?  Is that leg straight?  Could he use a little more weight, or a little less?  Is he too small?  Is he as nice as I really think he is?  Without other yearlings in my care, I don’t have anything to measure him against on a daily basis.  When I took him to the Future Event Horse Seminar in February, I was very eager to get an outside opinion; imagine my pride when he was scored as a “9” on conformation and type (this, the once crooked, floppy-legged foal!), and received many compliments on his correctness, proportions, and balance.  He doesn’t have a warmblood trot with floaty suspension, but that’s what I was willing to sacrifice in breeding a full TB.  What I wanted was a true galloping and jumping athlete with brains, stamina, and heart.  The FEH seminar confirmed my breeding decision was a good one so far, and made me so excited for what’s to come later as Harley grows into his potential. 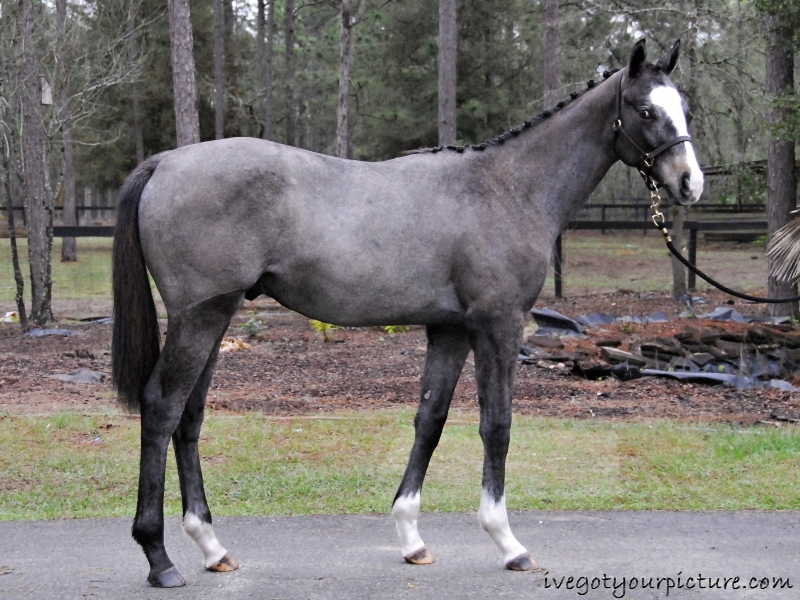 Ready for the FEH Seminar at 10 months old.  Photo by ivegotyourpicture.com.

Until then, I’ll enjoy every day as I get to watch him run and play outside, goading my Training level star into a game of chase, or ambushing my 21-year-old “grandpa” gelding.  I love seeing his big white face greet me over the gate, with ears that remind me of his mother.  Most of all, I look forward to the day when will I see the world in front of me between those ears. 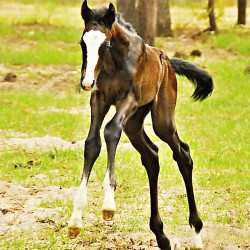 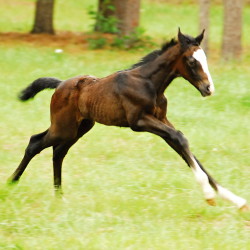 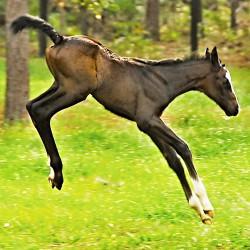 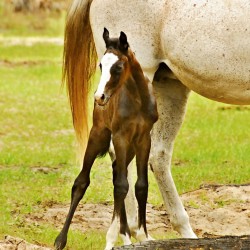 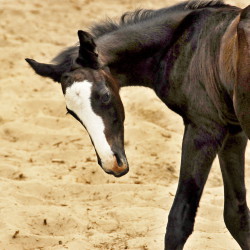 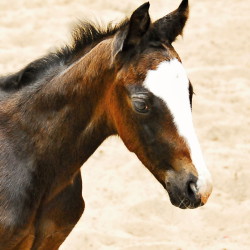 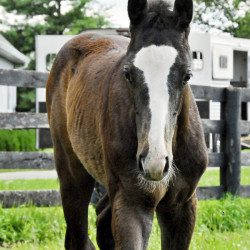 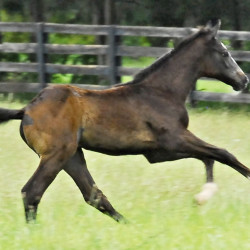 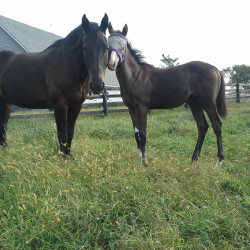 Just after weaning, about 5 months. 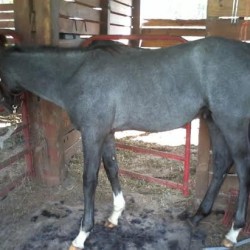 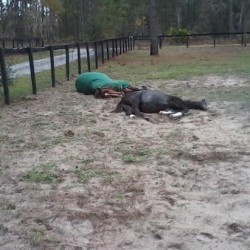 Napping with his 6-year-old friend. 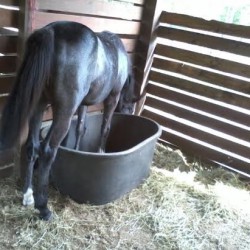 This is how he eats from his hay trough, every single day.