Event horse owners are one of the lifelines of the horse industry. Without the generosity of these people, we would not be privileged to see some of the greatest horses we have ever seen compete. It is only necessary, then, that we pay proper homage to these owners who continue to support the sport. We are happy to introduce a new series that will spotlight some of the owners throughout the eventing world. We begin our series with Jane Dudinsky, who currently owns horses for the likes of Doug Payne and Kate Samuels. Many thanks to Jane for taking the time to share her experience with us. If you or someone you know would be a good subject for this series, please tip us at [email protected] 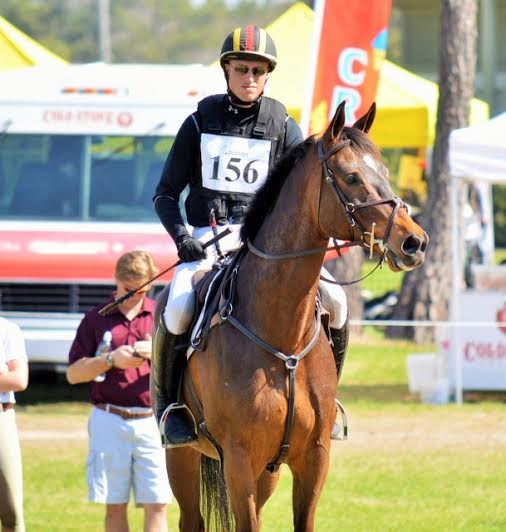 Owners and supporters of Eventing are what make our little world go around, and without them we would be left without a leg to stand on. Often times I find myself wondering, what makes for a great owner? Where do they find their joy, and what draws them to our sport? Jane Dudinsky has been supporting Eventing and professional riders for several decades now, and her love of the sport has only grown throughout the year. She is also an avid breeder, and derives much of her enjoyment from creating star athletes from scratch. She watches them grow up in her back yard and sees them progress to many levels of competition under professional guidance. I had the opportunity to ask her a few questions recently about how she started and what her program is like, and the story is wonderful.

Kate:  How did you get started riding horses? What drew you to them?

Jane: It was a little girl thing. There was something compelling about them, but I can’t say what it was.  The obsession started early on, but we lived in Baltimore and there was no question of my having a horse. My mother was afraid of them and my father was from a strict German family that didn’t indulge in such nonsense.  I found out eventually that my father’s family had been saddlers in Germany as far back as the 1600s, and probably for centuries before then.  They were saddlers, a father and eight sons (one of whom was my great grandfather) when they immigrated to the U.S. in the mid-1870s.  My grandfather made the necessary transition from horses to cars, but he sometimes talked about the carriages he had driven in his youth.  He ended up as a car dealer.  But I guess the horses were in my blood all along.

In the summers, we stayed at my grandmother’s beach house on the Severn River.  Grandmother made all the rules, one of which was that we were not allowed to visit the farm at the end of the road because the people there were known to be eccentric.  But it happened that two retired horses lived there:  the daughter’s cantankerous old pony and the mother’s big dark bay Thoroughbred named Rex.  Rex was retired with heaves and was said to be wild and dangerous.  We were not allowed to ride him under any circumstances, meaning I could only get on him in the pasture when the mother was out of sight.  Rex meandered around with me on his back, with no tack whatsoever, but he was quite slippery and I fell off a lot.  Falling off was fun back then.  I was smitten with Rex, and I discovered that the big so-called wild horse liked to be groomed and petted and fussed over, and he even seemed to like me.  I remember him as big, dark, warm, and kind.  I even liked the clouds of dust that blew off when I brushed him, even though “dust” is an affront to our German principles.  I think Rex grew to love me, and I to this day can still feel how much I loved him.

When I was 25, I married a Fenwick in Baltimore.  He said he was the only Fenwick who had never worn silks.  I had no idea what he meant by “silks,” but I did know that “Fenwick” meant “horses.”  That started the horse obsession all over again.

Kate: Where did your passion for breeding come from? Why Holsteiners?

Jane: I didn’t get a horse of my very own until I was 25.  He was a Thoroughbred that I named “Veery.”  He was 15.1 and fiery hot — much more horse than I could ever ride, but he was kind.  In spite of his temperament and my ineptitude, I stuck with him.  I think he must have taken pity on me because I fell off him only 3 times in the 20 years that we were together, and it had nothing to do with my skill as a rider.  With Veery, I started getting around in the horse world.  One morning I went to the barn and found, in the stall directly across from Veery, a mare and newborn foal.   The placenta had not yet dropped.  I was horrified by the placenta but mesmerized by the foal.  I watched the mother and baby most of the day and decided that I must have a mare and foal of my own.  I wanted baby horses.

Breeding became my dream, and I wanted someday to be able to call myself as a breeder, but it was 5 years before I could afford my first mare, much less my first stud fee.  I had been seeing breeds called Warmbloods in the magazines.  At my barn, they were referred to as “dumb-bloods”.  One day at a show I saw two different-looking horses standing at the end of the ring.  I had never noticed horses like them before, other than in pictures:  tall, slender and very dark, with an almost aristocratic presence.  I ran to find out what kind of horses these might be.  They were Holsteiners.  I vaguely recognized the word.

As it turned out, I began not with a Holsteiner but with a Hanoverian stallion, simply because I was dumbstruck by his beauty, grace, and loads of “presence.”  I had not yet realized that temperament was another trait that ought to be considered.   I had notions of riding my young horses myself, being ignorant of the fact that they would grow to be impossibly big and spooky.  Only after the first few injuries did I realize that somebody else would have to do the riding and training.  I should have known that something was amiss when the big stallion with presence reared and jerked his lead shank away, then launched a kick at nobody in particular.

I began looking for another stallion, and looked and looked and looked, but nothing passed the “dumbstruck” test.  I was ready to give up for the year when my vet mentioned that there was a German lady who had just moved to the area with a nice black stallion.  The lady was Liselotte Wiendieck and the stallion Merano, a Holsteiner.  Merano took my breath away.  On the evening that I first saw him a thunderstorm was moving in.  They brought the stallion out but had to be quick about it because of the storm.  I got only a glimpse, but I knew that he was brilliant and I was dazzled.  The next day, I returned to see his babies because Liselotte said you need to see the offspring before you breed to the stallion.  (I add now that you also need to see the competition records.)  She took me out to the “baby” fields, the mare and foal field, the yearling field, and the 2-year-old field, to meet the family. I was a bit nervous about walking into a herd of young horses, but they were quite curious and so very gentle!  There was one yearling who so clearly admired himself that he was continually jumping out of his field to be with the two-year olds.  That’s when it dawned on me that Holsteiners could jump.

After my first Holsteiner foal was born, Liselotte said I ought to take him to the breeding-stock approvals and “present” him.  This was a new concept.  I hardly knew what she was talking about, but I did it and the little colt won a medal.  Liselotte said that we had made a good match, her stallion and my mare. 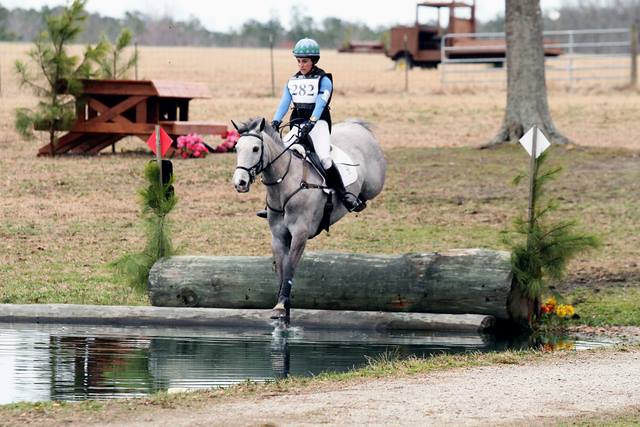 Kate:  How did you get into the sport of 3-Day Eventing? What inspired you to support the sport?

Jane: I first became acquainted with broken bones and wrenched soft tissues when I became acquainted with young warmbloods.  As I was a frequent inmate at the emergency room, it was becoming clear that somebody else would have to do the riding and training.  I had a few on-again off-again trainers until a friend located a talented trainer and virtually hired her for me behind my back.  She was twenty-one.  I was leery.  But this was a self-disciplined and hard-working twenty-one year old, my friend assured me.  The girl was Emily Beshear.  She said she was an eventer, but I took little notice because we had so very many training problems to solve.  Later, Emily asked me if I would mind if she took some of our horses to an “event.”  I didn’t quite know what she had in mind, but I said yes, go ahead.  Emily left with 4 horses and returned with 4 blue ribbons.  That’s when we got started.

Kate: What are some of your favorite memories and best success stories with your horses in Eventing?

Jane: My favorite memory has to be the first time I saw that our horses had some promise, when we entered two fillies into the performance test at the Holsteiner Breeding Stock Approvals.  The performance test is optional, and undertaken in addition to the presentation for breeding suitability.  Few breeders do it because they are breeders, just that, not trainers.  It’s a simple dressage test followed by eight little jumps. Our little girls both nailed it with ease, got top scores and endless accolades.  Liselotte whispered to me that this girl, meaning Emily, had a gift.  I’m not sure if it was Emily or the fillies or both, but we knew we had something going.

It is much harder to choose just one favorite success story! My silver tray, engraved 1984 Hunter Breeding Champion, won at the county fair.   Kalliope, my first event mare, winning national horse-of-the-year awards twice.  The Eastern DeBroke.  The Area II year-end Championships.  Seeing my babies always in the leaderboads, especially in the Top Ten Mares in the US.  Real silver prizes.  Racks upon racks of blue ribbons.  The big ribbons that they hang around your horse’s neck.  Selling a baby that didn’t want to event but liked to jump, and seeing him win $25,000 the next year.  Sneaking up and eavesdropping on Jimmy Wofford and Sally O’Connor talking about my horses. All of these things!

Kate: How long have you been working with horses? Involved with Eventing?

Jane: I can’t say when it ceased being play and started being work, but about 40 years.  In Eventing, about 17 years.

Kate: What is your favorite part of being a competition horse owner and breeder?

Jane: It’s the excitement, for one thing. When one of the babies is on course, I get so nervous that I can’t stand it, but when it’s over I can’t wait to do it again.  It’s the combination really, watching them grow and morph from newborns taking their first teeter-totter steps to wonderful creatures like Rex galloping their hearts out with world-class riders on their backs.