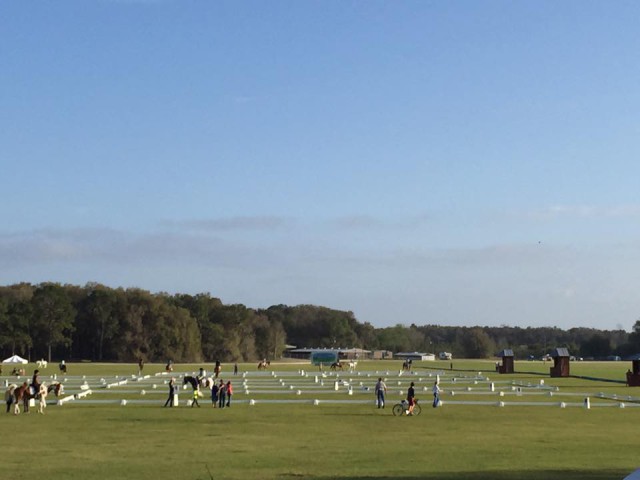 If you’re lucky enough to have migrated down to Ocala, Florida for the winter then you’re likely familiar with the Florida Horse Park (FHP). The 500 acres in the Florida Greenway are home to various equestrian events year-round including four USEA-sanctioned events and a multitude of schooling shows and clinics.

While the headlining item each year for eventing-enthusiasts may be the Ocala International Three-Day Festival of Eventing, which hosts divisions up to CCI2* in addition to combined tests up to Advanced, this event and others at the park may not be possible today if it were not for the hard work and dedication of a self-described motley crew of equestrian enthusiasts who call themselves the Partners of the Park (POP).

While initially established in 1997, the FHP emerged onto the eventing scene in 2005 hosting its first horse trials in the fall of that year over a cross country course designed by David O’Connor. The park further established itself as a world-class venue in the spring of 2006 by holding its first international three-day event. But the initial prosperity of the park was cut short as the state of Florida reallocated its finances during the nationwide economic recession of the late 2000s .

The future of the park hung by a thread without the state funding it depended on and found itself in a $1 million debt by 2009. It seemed that the final nail in the coffin was delivered when the Horse Park license plate project was unexpectedly shot down at the final step before approval. The license plates were estimated to bring in $250,000 annually and the process had already cost $100,000 that the park couldn’t afford to lose. 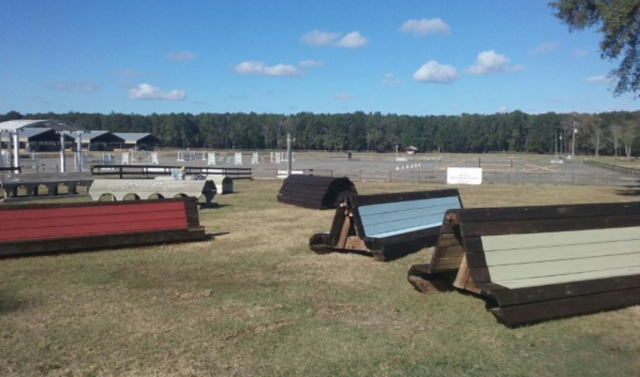 Cross country jumps after some end-of-season freshening up. Photo courtesy of POP on Facebook.

In May of that year the Horse Park’s Board of Directors met to discuss the remaining 2009 season as well as the long-term future of the horse park. As a result of the financial difficulties that the park was experiencing, the Board was forced to lay off key FHP staff and discussed cancelling many of the events scheduled to take place at the park that year. The public was invited to attend that board meeting to offer their opinions on the future of the park and as luck would have it, several members of the community — Simone Cormier, Charlie Hicks and Jen Holling — who would end up changing the future of the park were present at that fateful meeting.

As the board deliberated cancelling an upcoming schooling three-phase which was part of a season-long series of schooling events, Simone, Charlie and Jen came up with a plan. They recognized the asset that schooling shows can be and realized that with the park’s current financial situation, what it desperately needed was money supporting its infrastructure.

With a little convincing, and the help of Lesli Cohen, the FHP volunteer coordinator at the time, and Damian Guthrie, local show jumper and FHP treasurer, they reached a deal with the Executive Director: The three of them would completely manage and run the schooling events. Half of the profits generated by the schooling shows would be given back to FHP management and the other half would be used at the trio’s discretion and funneled back into the park’s infrastructure wherever they determined it was needed the most. The Partners of the Park was born.

Simone, Charlie and Jen have been running the POP schooling events ever since and each of these three musketeers has a unique set of talents and backgrounds that they bring to the table. Simone is an industrial engineer by trade and her organization and planning experience gave her a leg up on the organization of events and acting as show secretary. Charlie is a former Chief of Police who is both great at people management and has a knack for cross country jump building.

Charlie and Simone are both Massachusetts transplants and longtime friends, and they met Jen at that momentous Board of Directors meeting. A three-star level eventer herself, Jen brings a plethora of equine experience and eventing know-how.

“We formed a friendship and got together and said, ‘What more can we do?’ That’s how we started POP,” said Charlie. 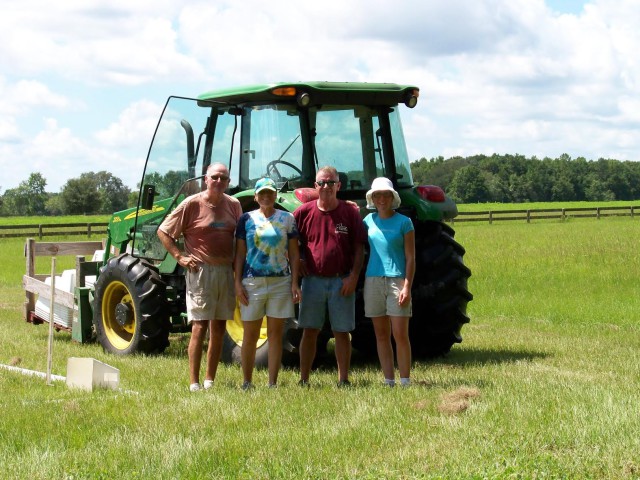 Charlie estimates that in the nearly eight years that the Partners have facilitated the schooling events they have contributed over $750,000 in cash and infrastructure to the park. Over the years they have kept fields mowed, purchased new equipment such as a water truck and ground aerators, repaired old jumps and built new ones, and paid for salaries when needed. Most recently they commissioned 19 new jumps built by Jay Hambly and Tommy Neneman and have a new water complex under construction.

While POP mainly features eventing, the FHP itself hosts a vast assortment of equine events and more throughout the year, all of which have benefitted in some way form the support that POP has generated. “It takes all the equestrians disciplines to make the venue successful,” said Charlie.

“We have dressage riders, eventers, and jumpers all coming together to use what the park has to offer. While our base clientele has always been eventers,” Jen said. “I see that our events have opened up the horse park to a larger community. With the growth of the park amenities alongside our own growing show clientele I see this trend continuing into the future.”

POP started out just by hosting a monthly three-phase, but has now grown to include additional schooling opportunities as well. A Saturday cross country schooling day now precedes each three-phase on Sunday, offering competitors the chance to familiarize themselves and their horses with the types of obstacles they might encounter beforehand. Additionally, at each three-phase one can ‘mix-and-match’ phases such that they can choose to compete in any one, two, or all three of the phases that day. Finally, from January to March on ‘Winter Wednesdays’ POP operates a jumper show and dressage fix-a-test clinics and opens up cross country schooling.

“We want everyone to come and have a great school so that they can go off the recognized shows and be safe and confident,” Simone said.

Though POP events mainly focus on the lower-levels, there is still something for everyone. Dressage and stadium can be ridden at a higher level and a few professionals even include the March or April schooling shows in their preparations for Rolex Kentucky. Throughout the year you may also be able to find various upper-level riders taking their young horses out for some low-key show mileage. 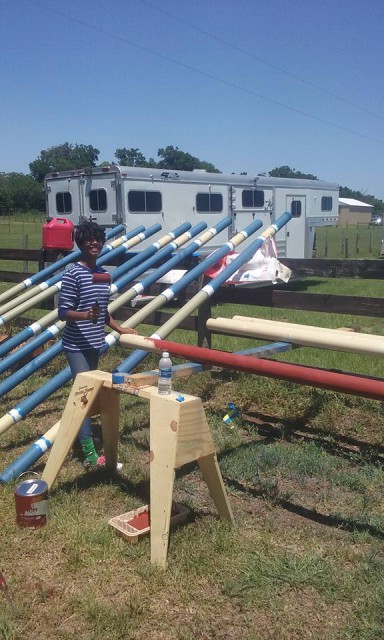 “We started POP as a short term solution for the horse park but in retrospect we actually solved a long term problem in the horse community,” said Jen. “We make available a facility that helps professionals economically school young horses and prepare their top partners and we allow amateurs to compete in an affordable and and educational atmosphere where we are here to help.”

“The wonderful thing about running schooling shows is that we have such a culture of eventers and equestrians — from the people just getting started to the people that have been representing different countries internationally,” Charlie added. “Everyone intermingles and comes together.”

The Partners have seen steady growth in the attendance at their events over the years, thanks in part to their hard work and dedication to keeping the events running and the awareness of them being spread by word of mouth. Additionally, Charlie has observed that with each year there seems to be more folks coming from out of state or up from Wellington: “This place is like magnet and its just growing. The land itself is very suitable for the equine industry.”

Even with the recent growth the area has seen, there’s still room to expand at the FHP. “If you’ve ever had the opportunity to step foot on the park and see the 500 acres there you know that there’s a lot that could be accomplished,” said Charlie. Recent growth in the greater Ocala area has benefitted the Horse Park as well, the new Ocala Jockey Club International Three-Day Event has brought more riders and healthy competition to Marion County.

While it’s these three folks — Simone, Jen and Charlie — who form the organizational backbone at the heart of the Partners of the Park, there are many more boots-on-the-ground volunteers that make the events each week possible. “A lot of the volunteers working with us have been helping us out since the beginning and we wouldn’t be able to do what we do without them,” said Charlie. “It’s all folks interested in putting their shoulders together and seeing what we could do to make the park successful.”

Having now hosted the park’s schooling events for eight years, Simone, Jen and Charlie are ready to take a bit of a back seat. “At this point we would love to just maybe take a step back and be there for hands on help,” said Simone. 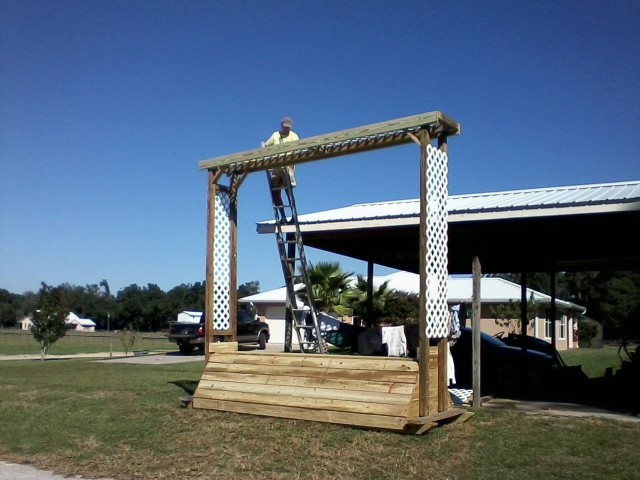 Charlie puts the finishing touches on a keyhole fence. Photo via POP on Facebook.

“The challenge has been to work with the park’s administration and get a pliable business plan to keep the place successful,” said Charlie, who now sits on the Board of Directors as Vice-Chair. “We have that relationship now and the direction is very positive.”

“This is the future. Schooling shows are where everybody starts off. These are the people that could be up at the top of the sport in another four or five years. If we can make it affordable and give them a good experience then they’re going to stick with it.”