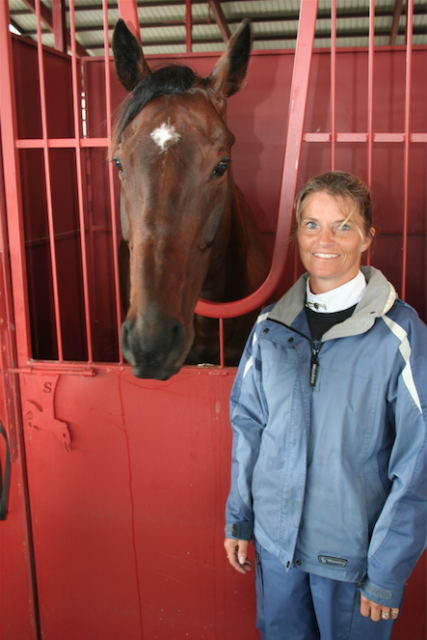 Lesa Cafferty and her 8-year-old off-the-track Thoroughbred, Bay Drummer, have been Roebke’s Run regular attendees since Magister Equitum Stables and Mike and Julie Schweiss made it a reality. What’s unique about that is she comes here from Manitoba, just outside of Anola, a half hour east of Winnipeg, Canada. That’s an 8-hour, one-way trek for her.

“Bay Drummer raced until the fall of his 4-year-old year — he only ran two seasons. He just didn’t have the speed; he did win one race, but didn’t win enough for the trainer, so they put him up for sale because he wasn’t making them enough money,” Cafferty said. That was perfect for Cafferty and Bay Drummer, who, like her other horses, is more than likely living a better life with his new loving owner as a result.

This was the third straight summer for her at Roebke’s Run since she started competing in eventing in 1992. She was at Roebke’s Run this year competing in the Training Horse division. When she feels Bay Drummer is up to it, she will move him up to the Premlinary level. She does rider training for other people as well and tells people she has four jobs — working full-time, training horses full-time, competing full-time and coaching full-time. Her husband says, “It’s an injected disease that she has.”

“I made it to every horse trial here, including the fall events, except for the very first one. I come here because I really like the course and because it is close for me. The problem with Manitoba is we don’t have anything there except for a small course. If you actually want to progress in the sport, you have to get out. There’s five different U.S. competitions within a 10-hour drive for me; whereas if I stayed in Canada, the closest is Alberta, which is 18 to 20 hours away,” explained Cafferty.

Cafferty said the long drives really don’t affect her horses’ performance much. She said the horses get used to it because it’s pretty much all they do now. She does her best to keep Bay Runner fit, well fed with grain and energy feeds. If she goes to two events on back-to-back weekends, she tries to stay with a friend in the States to eliminate time on the road.

Because she has attended so many Roebke’s Run Horse Trials, Cafferty has seen the course steadily progress to where it is today.
“The course was amazing the first time I came in the fall of 2011. Each time I come, it just grows,” Cafferty said. “It gets bigger, it gets better; the fences and questions get tougher. It’s not a course to drop your guard on, that’s something I emphasize to my students when I bring them here. What’s great is that it makes us better riders, makes us ride harder; we have to think smarter. In order to progress in the sport, that is what we need to excel.

“I absolutely love the facilities. The stadium ring is fabulous, they do an amazing job of keeping the footing good on the cross-country course — if it’s hot and dry they aerate it. They put the effort in to make it the perfect setup for horses. To me it’s very top class, right up there with a lot of the other first class facilities that I go to.”

When asked if she would be competing at the American Eventing Championships in Texas, Lesa said hasn’t looked into that and thinks that because she’s a Canadian rider, she’s not sure if she qualifies for the U.S. championships — all her memberships are Canadian. She said if it’s possible for her to compete in the Canadian National Championships she would aim for it, but it’s so much easier for her to come across the border into the U.S. She can’t just do it that easily because she also has a full-time job.

Cafferty said she owned her first horse at age 18 and really got excited about eventing after watching a movie. “I watched a movie when I was a kid called International Velvet with Tatum O’Neal — not to be confused with National Velvet. I didn’t honestly know the sport existed until I watched the movie. I said ‘You know, I’ve got to try that!’”

She’s tried it now for over 22 years, and she likes it all. She’s not afraid to mention that she is now 40 years old. But age isn’t stopping her by any means; if nothing else, she’s putting it into high gear. “My ultimate goal with this sport is to represent Canada on the Olympic team,” said Cafferty. “You have to do this if you want to progress. There’s a lot of traveling, but I’m not going to get anywhere if I stay home.”