Hello Eventing Nation! It’s been a while since I last dispensed unconventional wisdom pertaining to essential life skills of city dwellers who happen to event (aka “Tips for Eventers Living in Itty Bitty Apartments in the City”). This is not indicative of me resolving every issue associated with cramming an equestrian lifestyle into 500 square feet of overpriced Washington, DC real estate; rather, it’s representative of my cray-cray existence in which all of my time is consumed by work, checking live scores when I should be doing work, or dodging “micro-storms” to get my horses ridden so that I don’t embarrass myself at events. In fact, the only reason I am able to write this (and hopefully subsequent) posts is that I’m on…wait for it…wait…wait…Vacation. 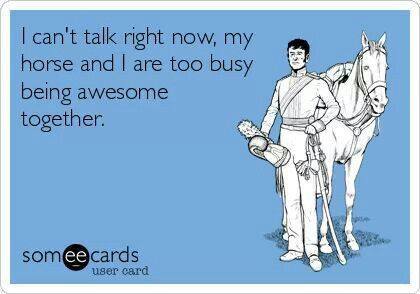 Like pretty much every horse person I know, however, this “vacation” is really just all about my horse. On Monday, I loaded my pony and about pretty much everything in the barn except the obese barn cat in a trailer and headed 550 miles west to Lexington, Kentucky to participate in the U.S. Pony Club’s triennial Festival celebration. During Festival, Pony Club members from across the nation basically take over the Kentucky Horse Park for four days of championship competition in mounted games, dressage, polocrosse, show jumping, tetrathlon, quiz, and of course eventing, followed two and a half days of mounted and unmounted educational clinics on topics ranging from bandaging and parasites to tips for improving your horse’s manners on the ground. Now in its eleventh incarnation (the first Festival was in 1983), the 2014 Festival is also a celebration of U.S. Pony Club’s 60th anniversary. Let’s just say it’s a pretty big deal. 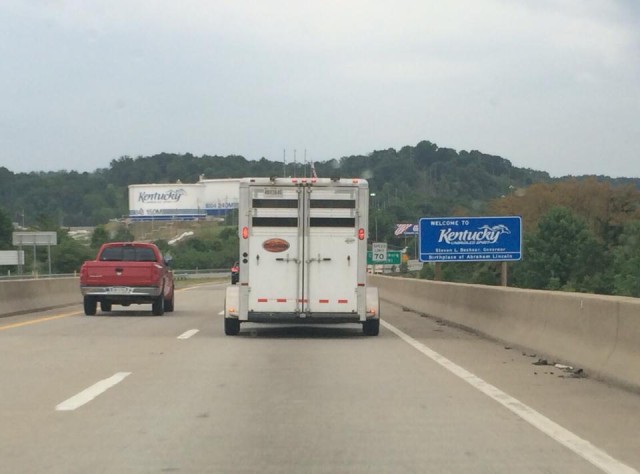 Obligatory picture of my pony’s horse trailer (lovingly referred to as the “Eventing School Bus”) crossing into Kentucky.

Now I’m sure a few of you are like, “cool – I was in Pony Club back in the day, but aren’t you too…OLD for Pony Club?” While I prefer to act my shoe size (7) rather than my actual age (uh, more than 7), it is true that I am technically too “old” to be in Pony Club (*sob*). However, through the fairly new Pony Club Horsemasters program, adult riders can now pursue the Pony Club curriculum AND put their skills to the test at regional and national competitions. As a Pony Club graduate with uber-fond memories of my time in Pony Club and participation in five Festivals (1989, 1992, and 1995 as a youth member and 2007 and 2011 as a Horse Management judge), I practically leapt at the opportunity to compete as a Horsemaster in the 2014 Festival!

Competition officially kicked off today starting at noon, with discipline-specific briefings scattered across the horse park and horse inspections for all the riding disciplines. For the Eventing staff, this required herding 271 cats competitors and their  horses. I have to say that it was pretty trippy to present my 14.0 hand “Super Pony” on the Rolex jog strip. And, since parents and other non-competitors are not allowed in the barns during Pony Club competition (which allows members to demonstrate their horse management skills and teamwork) we had a fairly large crowd to cheer every acceptance. After barns closed, competitors gathered in the Alltech Arena for the Parade of Regions and Opening Ceremonies. With over 1,000 competitors, it was pretty impressive!

Tomorrow is a big day – not only does riding start, but we all have our first “big” horse management inspection in which all aspects of our turnout (grooming, tack, and attire) will be assessed. I’d bet money that there will be a long line of greys and pintos lined up at the wash racks first thing in the morning…just hope I’m not one of them…ugh. Stay tuned for the next update!

An extremely rare photo of the KHP wash rack in which none of the participating horses are grey, pinto, or otherwise visibly spotted…

Check out the U.S. Pony Club’s website for more information about Festival!