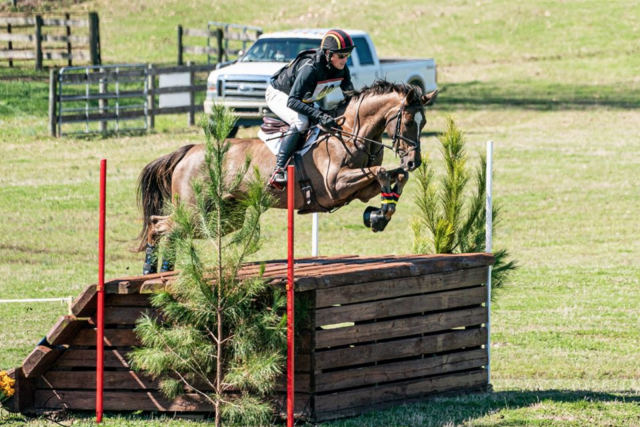 It was a literally freezing morning at Pine Top Farm in Thomson, Georgia yesterday (isn’t it supposed to be warm down south?) but blue skies prevailed and great day of sport was had as the Advanced and Intermediate divisions ran cross country in one of biggest season-opening events on the East Coast. Those who led the Advanced divisions after the first phase maintained their leads to bring home blue ribbons at the conclusion of the competition.

Doug Payne and Starr Witness led the Advanced A-A division from wire-to-wire, making for a rather impressive debut at the level. The pair nabbed the lowest marks of all the Advanced level entrants in the competition, a 23.80, and ran the second fastest cross country round at the level, adding two time penalties to finish with a score of 25.80.

The now 9-year-old Dutch mare (Chello II x Carmen, by Veneur), owned by Doug, Laurie McRee and Catherine Winter, has had an impressive career at the Intermediate level prior to her Advanced move-up this weekend. Last year she and Doug won both the The Fork at Tryon CCI3*-S and the Jersey Fresh International Three-Day Event CCI3*-L. The “Ginja Ninja,” as she’s affectionately known, further proved her mettle with Doug by representing the U.S. at the Pan American Games in Lima, Peru last summer finishing fourth individually and helping the U.S. to secure team gold. Looks like the sky is the limit for this young liver chestnut mare, and we’re pretty excited to see what’s in store for her next!

Liz Halliday-Sharp and Cooley Moonshine had been occupying the second slot in this division after yesterday’s show jumping, but the gelding slipped and fell on the flat after fence 5 on cross country. After both horse and rider were checked that it was deemed that each were O.K., they were allowed to continue but unfortunately the incident caused them to run a minute and a half over optimum time which saw them drop down the leaderboard. However, that left room for Ireland’s Tim Bourke and the beautiful dark bay 9-year-old Irish Sport Horse mare Quality Time (Guidam X Ruby Roller, by High Roller) owned by Carla Abramcheck to finish in second place with a score of 38.50, adding just planned cross country time to their dressage score.

Kylie Lyman and Da Vinci Code, owned by Joan and Geoffery Nichols, knocked a good 6.7 penalty points off of their dressage score compared to their marks from this event last year. Their score of 29.60, which saw them in second place in the division after the first phase, is a personal best for Kylie and the 13-year-old Irish Sport Horse gelding (Master Imp X Clovers Apollo, by Clover Hill) at the Advanced/ CCI4* level. The pair pulled two rails in Friday’s show jumping, dropping them to 10th place overnight, but speedy cross country trip that racked up only 2.8 time penalties caused them to bounce back up to finish in third place with a final score of 40.4 and a lovely strong start to their season! 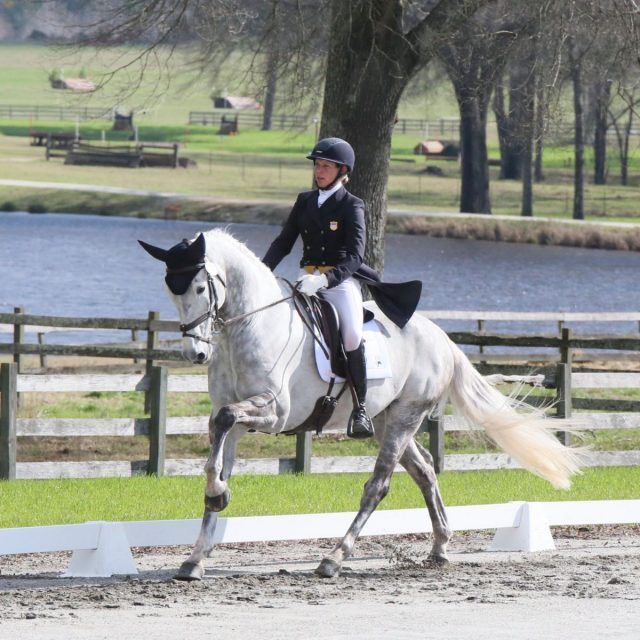 Liz Halliday-Sharp and the Monster Partnership‘s Cooley Quicksilver won one of the Advanced divisions at this event last year, and they repeated the feat again yesterday topping the Advanced A-B leaderboard with a score of 29.60, also leading the division from start until finish.

Cooley Quicksilver, or “Monster” as he’s known around the barn, a 9-year-old Irish Sport Horse gelding (Womanizer X Kylemore Crystal, by Creggan Diamond), scored a personal best at the level in the dressage, earning a 24.80. The pair added just time — 0.4 in show jumping and 4.40 across the country — to that dressage score.

After riding four horses at Pine Top this weekend, Liz has already traveled back down to Florida to Three Lakes Winter II H.T. where she is competing another three horses. Here’s to a continued successful weekend, Liz!

Second and third places in this division remained unchanged as well. Jenny Caras and Advanced level debutante Trendy Fernhill, a 9-year-old Irish Sport Horse gelding (Ars Vivendi X Cruseings Girl, by Cruising) owned by the rider, rode the fastest across the country in this division, adding 3.20 time penalties to their dressage score for a final score of 32.00. Will Faudree and Mama’s Magic Way, owned Jennifer Mosing and Sterling Silver Stables, added 7.60 time penalties to their dressage score to hold third place on a 37.40 with the 9-year-old Hanoverian gelding (Mighty Magic X Straightaway, by Star Regent XX) in her debut at the level. Congratulations to both riders on such successful move ups with these horses. 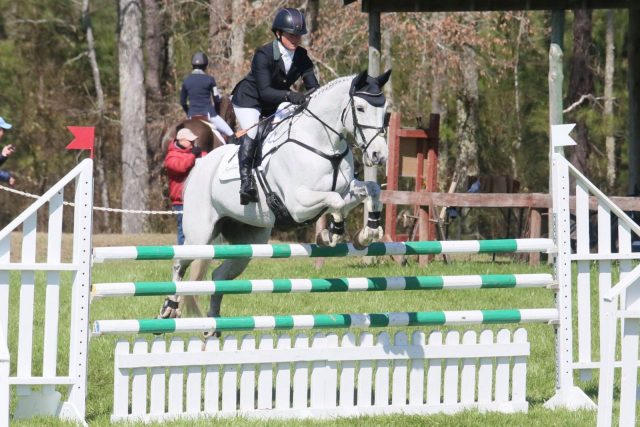 Our third Advanced wire-to-wire winner is Emily Beshear and Olney Uncle Sam, owned by Jennifer Ward, taking the title in the Advanced B division with a 32.50 after adding only 6.40 cross country time penalties to their dressage score. Emily got the ride on the now 13-year-old Trakhhner gelding (Sonset Sieger X Aerial, by Starman) in 2017 after his owner rode him through the CCI2*-L level. Emily moved him up to the Advanced level at the Fair Hill H.T. in April of 2018 and his dressage score this weekend of 26.10 is his second best at the level.

The only clear and inside the time cross country ride of all three Advanced splits was delivered by Canada’s Waylon Roberts and Lancaster, a 13-year-old Canadian Sporthorse gelding owned by Michelle and John Koppin, who won one of the Advanced divisions here last year. This speedy round, along with a double clear show jumping test, meant that they moved up the leaderboard from seventh place after dressage and finished the weekend on their dressage score of 33.40 in second place in this division.

Third place was earned by fellow Canadian Colleen Loach and her seasoned partner Qorry Blue D’Argouges, owned by Peter Barry, as they added 5.60 time penalties to their first phase score. The 16-year-old Selle Francais gelding (Mr Blue X Hardie Bu Bourg, by Count Ivor) owned by Peter Barry has taken Colleen from her first appearance as a member of team Canada at the 2015 PanAms to the 2016 Rio Olympics, and to the 2018 World Equestrian Games — it’s always fun to see such an established partnership doing what they do best out on course! 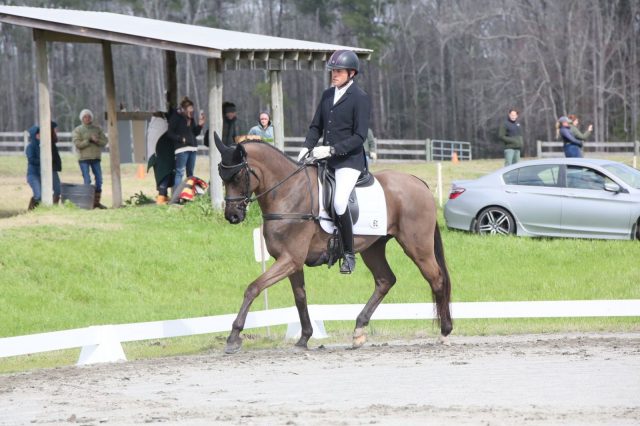 If you thought the three Advanced divisions were jam-packed, then bear with me as we take a quick glance at the four Intermediate divisions which are certainly not to be ignored:

Colleen Loach nabbed a one-two finish in the Intermediate Horse division with FE Golden Eye, her 2019 PanAm Games mount, and Vermont, who placed second in the Dutta Corp. Fair Hill International CCI3*-L last fall, with scores of 33.80 and 34.90 respectively. Hot on their heels in this division were Liz Halliday-Sharp and Cooley Stormwater who finished in third with 35.60 marks.

Sara Kozumplik Murphy didn’t let a cross country blip during the MARS Eventing Showcase earlier this month derail her confidence aboard her magical unicorn Rubens D’Ysieux as they took the win in the Open Intermediate A division. The pair very nearly finished on their dressage score, but ran two seconds over time across country for a final score of 31.30. Liz Halliday-Sharp makes another leaderboard appearance, this time with Flash Cooley, in second place on a 37.40. Our USEF Eventing CCI5* National Champions and 2019 PanAm Games individual gold medalists Boyd Martin and Tsetserleg nabbed third place in this division. After a well-deserved vacation, this is the first horse trials back after the PanAms for the little black gelding that could.

Speaking of Boyd, this was his first full competition back after recovering from a groin injury that resulted from a fall at Plantation Field last September. He said in a recent blog post that he’s feeling “fit as a fiddle” and not one to ease back into the swing of things, he jumped in with both feet and rode nine total horses this weekend! Tsetserleg wasn’t the only famous name among them, either: Blackfoot Mystery, Boyd’s 2016 Rio Olympic Games mount, made his first USEA start since September 2017 in the Open Preliminary A division this weekend.

The Open Intermediate B win went to Phillip Dutton and Quasi Cool, a Holsteiner gelding relatively new to U.S. soil as he was imported last year by Caroline Moran from Germany’s Dirk Schraede. They finished on a 32.80 after adding just cross country time to their dressage score. The second and third placed finishers in this division both leapt up the leaderboards by finishing on their dressage scores. Alexandra MacLeod and Newmarket Jack moved from 10th after dressage to finish second (35.30) and Sara Kozumplik Murphy jumped from eighth to third with Gran Torino (37.80).

Finally, we come to the Open Intermediate division which was topped by Katie Lichten aboard her sister Maddie Lichten’s Yarrow. Despite a single rail in stadium, a fast ride across the country coming accumulating just two time penalties for a final score of 35.00 earned them the blue. Katherine Christopher and Frodo of the Shire moved from sixth after dressage to finish in second place with a 39.60 while a score of 41.00 sees Katherine DeLaney and Canto Royale finish third.

Boatloads of thanks go to Chris OHagen Quinn and Mary Patricia Stone for being our eyes on the ground this weekend and sharing their photography skills. 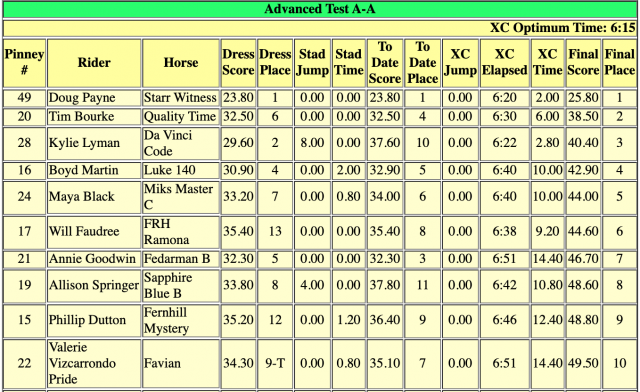 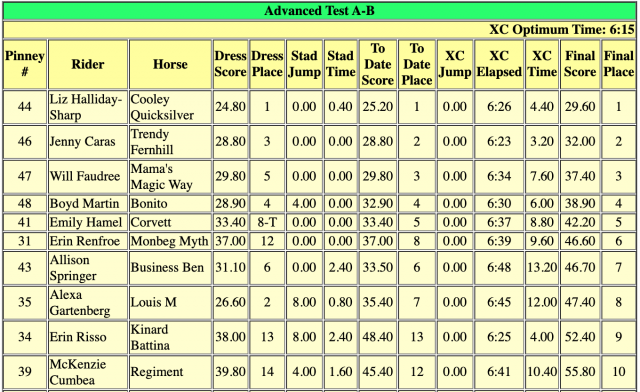 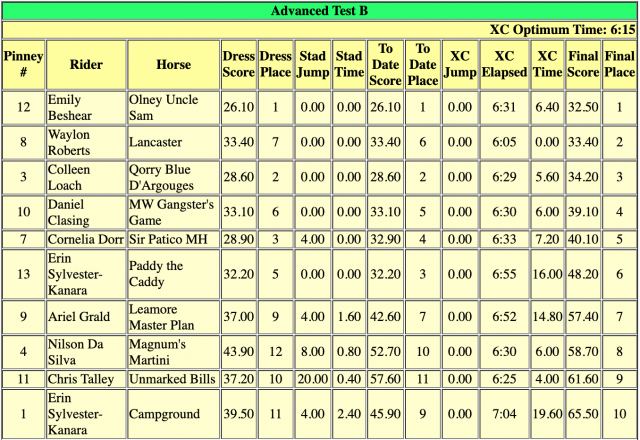 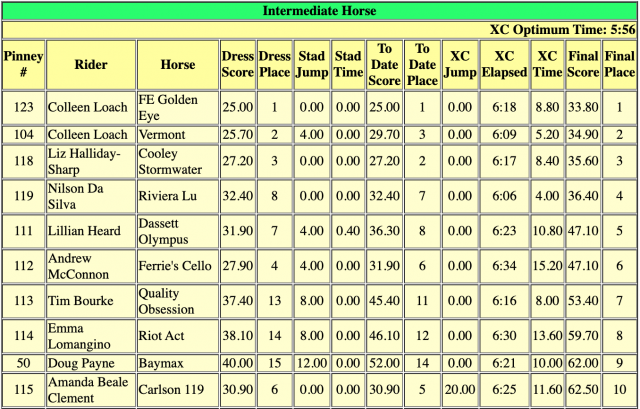 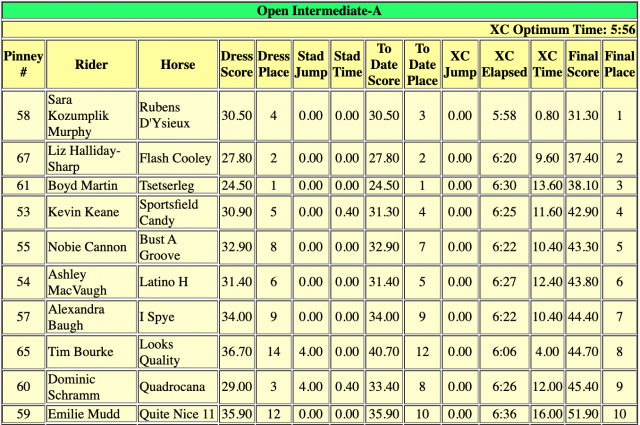 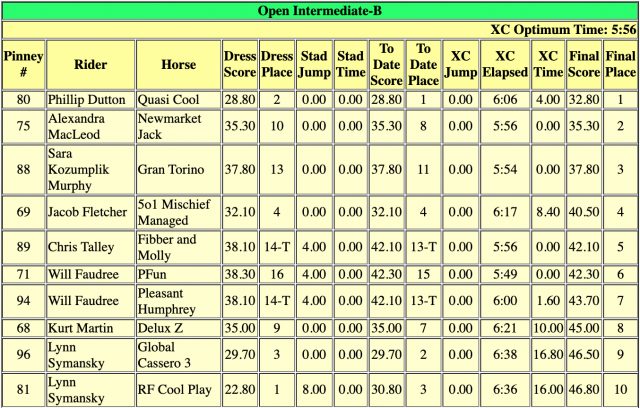 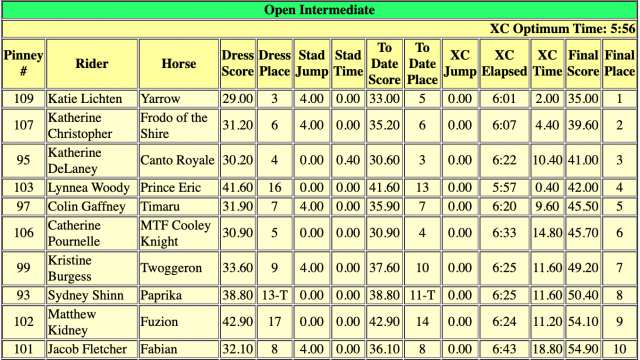