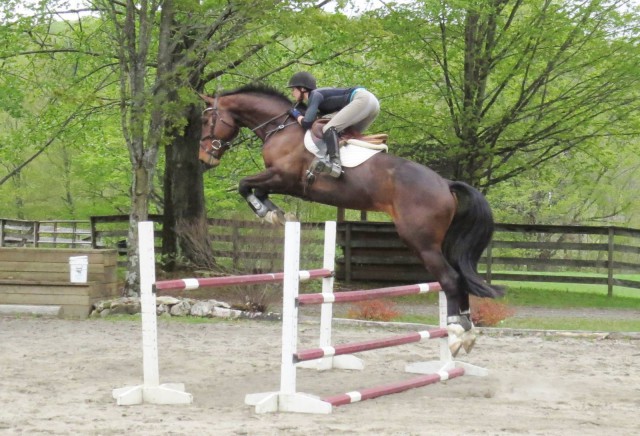 After crawling out of that dark, frigid and lonely indoor this winter, I am starting to get back into the swing of things. Tamarack has officially returned home and I could not be more thrilled about 1) being able to jump outside again, and 2) having other human beings around to interact with. And yet, amidst this overwhelming excitement that the life I have become familiar with has finally resumed, I cannot help but feel the creaky riding, the bad habits resurfacing, and the inevitable layer of rust that built up over the past seven months.

The recent picture taken above might lead you to believe that I am back in the game and that I haven’t missed a beat. Well, that could not be further from the truth. This picture was taken last Friday. This was my first jump school on Skybreaker since Denny returned from Southern Pines. After jumping teeny tiny jumps once a week all winter in about a 30 meter indoor, to say I felt prepared to jump anything over 3 feet would be a massive lie. The lesson started off a bit shaky, but ended up feeling amazing in the end. However, in the beginning of my ride I was questioning the height of the jumps, my ability to get the canter I desired, and my ability to see a distance. I never once questioned Skybreaker’s innate ability to lope over massive jumps. But, I was nervous and feeling completely off my game.

Since I have been getting back into the swing of things, I have been feeling extremely rusty. I watch other riders quietly and effortlessly jump 3’9” courses, and think how can I get back to that place? Or, when I am going to feel like I am IN IT again? Why can’t I ride on my own all winter and come out ahead of the game? What am I doing with my life? Who ever said I could ride? I can’t ride….and so on and so forth. Anyone want to join the pity party? 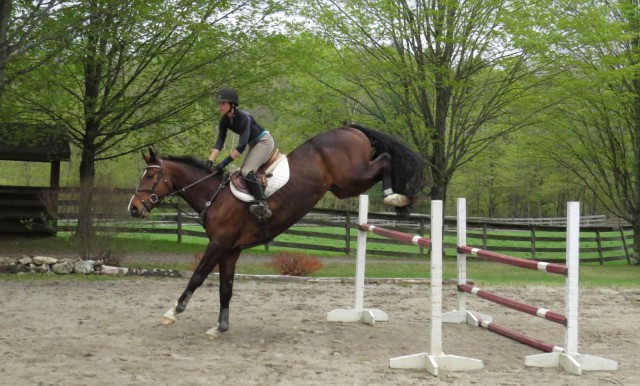 ….and then we landed!

Denny has taught me more than I can articulate. One crucial factoid that has made an everlasting impression revolves around not giving up. So riding horses can be tough at times. So I spent an entire winter alone and miserable…so what? So we can’t all see our distances 100% of the time, so what? So we made a mistake on xc, or we really blew it in that show jump round. We have to learn from our mistakes and move forward.

This is where you have be able to fight for yourself. If YOU don’t think you can do something, or you don’t believe you can do something, then why should anyone else have faith in you? We have to roll with the punches. We have to take criticism, or advice and learn how to progress. I am feeling especially rusty right now, but I have officially made it my goal to prove others wrong. I can do this. I will do this, and there’s nothing anyone can say that will change my mind. If I can figure out how to get back into the game after not competing, or having lessons, or riding outside for seven months, then so can everyone else!