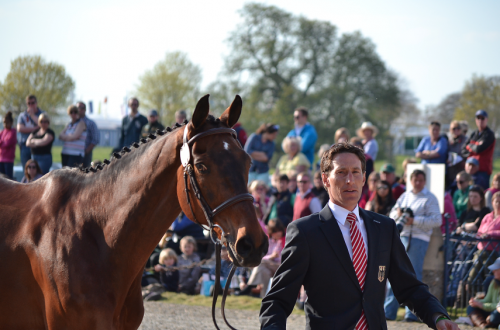 PETA is calling for an end to eventing after two high-profile equine deaths occurred at European events this month, Fran Jurga reports. King Artus, Dirk Schrade’s mount on the gold-medal winning German team at the 2012 London Olympics, died of an aortic tear following cross country at Wiesbaden in Germany on May 18. Last weekend, Dutch rider Raf Kooremans’ mount Cavalor Telstar also died after completing cross country  at Houghton International Horse Trials in Norfolk, England. The cause of death has not yet been released.

It’s always tragic when a horse expires on course. While advances in cross-country fence design like frangible pins and foam logs have reduced the number of crash-related deaths, the threat of heart-related issues occurring on course is still very real. Thankfully, it’s something the sport is working hard to understand and hopefully prevent. The USEA is undertaking a comprehensive Equine Cardiovascular and Pulmonary Research Study, which focuses on examining how efficiently a horse’s cardiovascular and pulmonary systems function when galloping and jumping cross country. You can donate to this important study on the USEA website.

While it’s difficult to stomach any negative attention the sport receives — especially when the remarks are so scathing, as you’ll read below — it’s also important to do everything we can to preserve the welfare of our equine partners. While we probably can’t agree with PETA on much, we can at least find common ground in that. Weigh in, EN. What are your thoughts on PETA’s claims? Should the sport be doing more to study and understand heart-related issues that arise during cross country?

From The Jurga Report:

Jennifer Kirchner, PETA spokesperson, has been quoted by the German Press Agency and St Georg magazine as saying that “The tragic death of King Artus prove(s) that these events are too demanding for the horses. Horses are sensitive animals and to make them jump such dangerous obstacles under time pressure is animal abuse”.

On May 21, PETA called for an end to the sport of eventing. In an announcement on the organization’s PETA Germany web site, the group wrote: “PETA urges all riders to be aware of the dangers that await them and their beloved animals. Every horse owner should (hold) the welfare of his animals at heart, so we ask all eventers, to think carefully whether they want to risk the life of their own and their animals…In addition, we ask all spectators to refrain from visiting such events.”