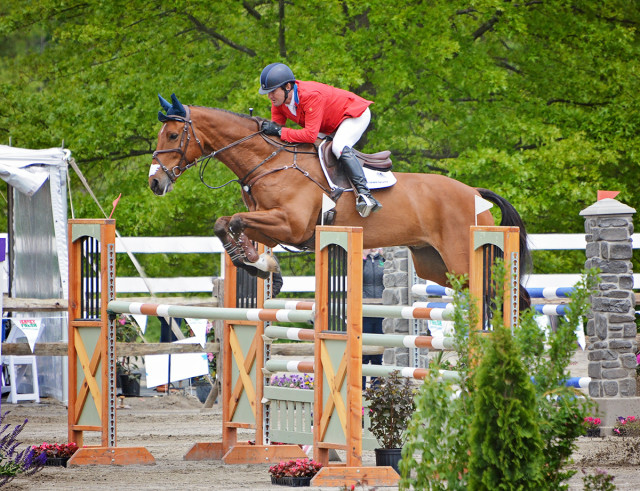 It’s an overcast, cold day here at the Jersey Fresh International Three-Day Event, which matches the solemn atmosphere as we all continue to mourn the loss of Philippa Humphreys, who died yesterday following a rotational fall with Rich N Famous at fence 16 on the CCI3* cross country course.

The competitors at Jersey Fresh met last night and decided to continue on with the event in honor and memory of Philippa. A moment of silence and tribute to Philippa was held this morning prior to the start of CCI2* show jumping, and those in attendance on the grounds today are wearing navy blue ribbons to honor her.

Rails proved to be costly in the CCI2* show jumping finale, with just four pairs jumping clear rounds over Sally Ike’s course to scramble the leaderboard. Phillip Dutton and Sportsfield Candy’s double clear effort moved them up from fifth after cross country to take the win on their dressage score of 48.8, the only finishing score in the 40s.

Dave and Patricia Vos, who own the 9-year-old Irish Sport Horse gelding, donated the $2,500 in prize money to a college fund that has been set up for Millie Humphreys, Philippa’s 6-month-old daughter. Nearly $20,000 has been raised for the fund since last night, with a total goal of $125,000 to help Millie receive the best education possible.

“Candy” is a newer ride for Phillip, having come into his barn earlier this year as a former ride of Jenn Simmons, who retired from competing in upper-level eventing last fall.

“I can’t take too much of the credit since Jenn Simmons brought him over from Ireland. He needed to do a two-star for qualifications. He had done one before (at Fair Hill last fall), but he studded himself and didn’t show jump,” Phillip said.

“I’ve had him at the Advanced and CIC3* level all spring. This was a step down a little bit from what we’ve been doing. It was a great experience for him. He’s quite a talented horse.”

Candy was originally sent to Phillip to sell, and if he’s still in Phillip’s barn this fall, he’ll aim for the Dutta Corp Fair Hill International CCI3*. 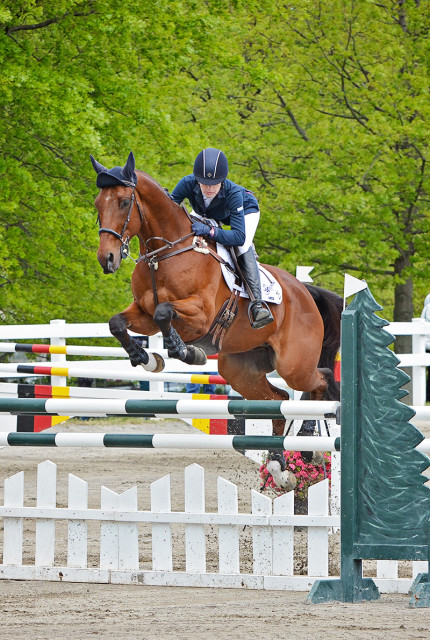 Holly Payne Caravella and Bruisyard Hall had one rail down to remain in second place on 50.3 in the horse’s CCI2* debut. “Bruges,” a 9-year-old Thoroughbred gelding owned by Shelby Godfrey, was only competing at Training level a year ago, which makes his performance this weekend all the more impressive.

“I’m thrilled with him,” Holly said. “He’s definitely still a little green, but he was super all weekend. I couldn’t be happier with him.”

“Bruges” raced 17 times under the Jockey Club name Inbetweenthesheets (Sought After – The Borg Queen, by Fruition). We got to know him a bit better earlier in the competition, so don’t miss this feature story to learn more about him.

As for what’s next for Bruges: “He’ll keep running Intermediates and head for Fair Hill in the fall,” Holly said. “He definitely needs more time at the level now. He’s got to stay there and develop a bit and get more confident and a little stronger.” 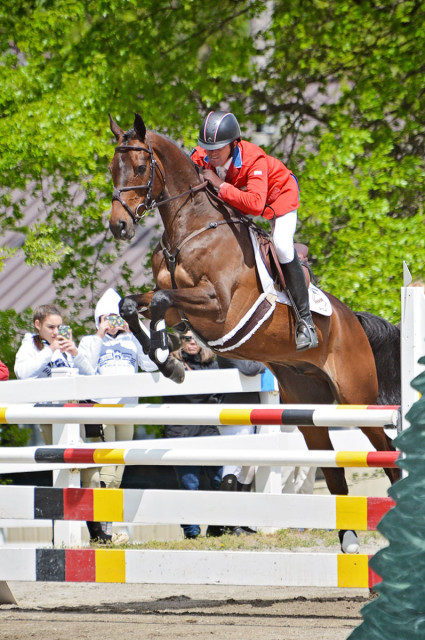 Will Faudree and Hans Dampf. Photo by Jenni Autry.

Will Faudree and Hans Dampf jumped clear and inside the time to move up from sixth to third place to finish on their dressage score of 51.4. He’s been working hard to develop a partnership with the 10-year-old Oldenburg gelding owned by Jennifer Mosing, and Will said he’s very happy with the result.

“He felt great this weekend. I made the decision after Fair Hill a couple weeks ago that I would just do the two-star (at Jersey Fresh) on him. He was 3rd in the CIC2* at Carolina, and he did the CIC3* at The Fork. He’s been to the three-star level with Andreas Dibowski before I got him and had won at that level,” Will said.

“This weekend was a step down for him, but really a step up in our partnership together. I’m starting to figure out how to ride him in the show jumping, which has been a little bit of a struggle this spring. Yesterday helped solidify us understanding each other. We don’t always speak the same language, and we’re starting to have a line of communication.”

Will said he will step “Hans” back up to Advanced now and is thinking about aiming for Fair Hill CCI3* in the fall. “He’s a phenomenal horse; I’ve said that from the beginning. He’s a phenomenal jumper; he’s very competitive. He’s very earnest about everything he does,” Will said.

“I’m happy with the decision to step down a level and just try to solidify a partnership because I do think he could be a valuable horse for the U.S. in the future.” 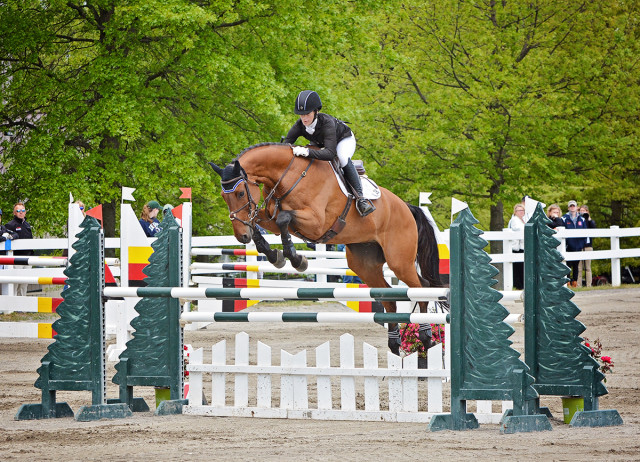 Lexi Scovil and Charleston VI, a 9-year-old Dutch gelding she owns, had one rail down to finish fourth on 52.7, which improves on their finishing score from their first CCI2* at Fair Hill last fall by 35 points.

Frankie Thieriot Stutes and Chatwin, who led the CCI2* after dressage and show jumping, had two rails down in the triple combination to finish in fifth place on 54.5. Tamie Smith and Lagos Star, who sat in third overnight, also had two rails in the triple to drop from third to sixth on 55.1.

In addition to the combinations mentioned above, Lizzy Jahnke and Princeton also jumped a clear round to finish seventh on 56.8, as did Tamie Smith and Fleeceworks Royal to finish 14th on 89.6. 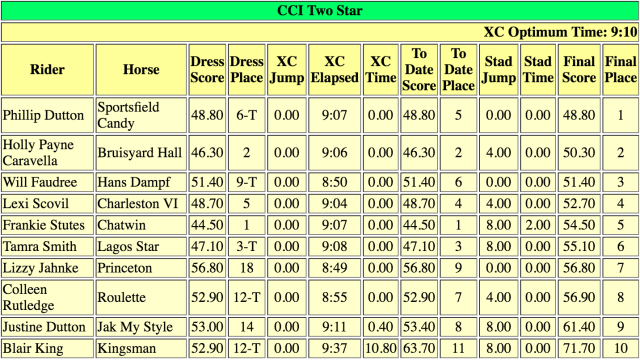