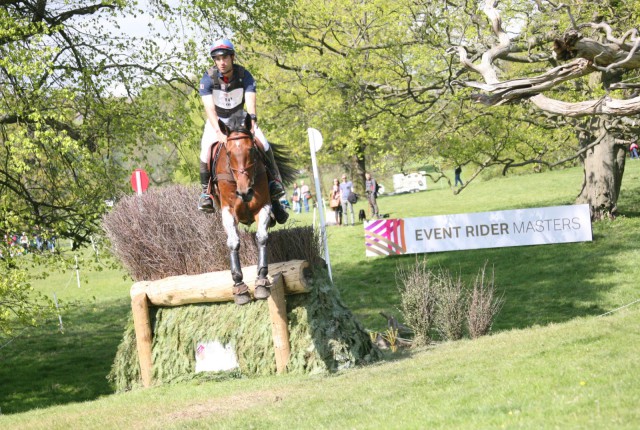 The hilly twists and turns of Chatsworth did their work on the leaderboard this afternoon to up-end the placings and shake loose everyone but the French, who positively flew around the course to claim first, second and third in the inaugural Event Rider Masters.

Astier Nicolas and Piaf de Bneville started off their morning with a double-clear show jumping round and later added 6.4 cross country time penalties to their dressage score of 38.2 to claim the top payout. They were followed closely by fellow Frenchman Thibaut Vallette and Quing Du Briot, who finished second on a final score of 45.5. Bringing up the rear of the podium was Karim Florent Laghouag and Entebbe de Hus, who had the second-fastest cross country round of the day with 2.8 time penalties, launching them from 12th after show jumping to third.

“It’s amazing to win the first leg of ERM and I am delighted for my horse Piaf De Bneville,” Astier said. “This new competition format means you ride it more like a three day event rather than one day and the crowds getting behind the riders has created a really big atmosphere across all three phases.”

In the Event Rider Masters format, show jumping is held first thing Sunday morning followed by cross country in the afternoon, which meant the board was changing from sun-up to sundown with every rail and time fault and double clear collected.

Dressage leaders Kitty King and Ceylor LAN of England maintained their foot-perfect weekend with a double clear round on the turf course, giving them a little more breathing room for time penalties for the final phase. Ireland’s Aiofe Clark had a costly rail which dropped her from second to seventh, and Bettina Hoy who was third after dressage fell to 17th with three rails down. Our future winner Astier Nicolas wedged himself a nice spot in the leaderboard just a couple seats up from his dressage position, from fourth to second.

Rails left and right cracked the door open for American Clark Montgomery and Loughan Glen, who were 11th after dressage. The pair turned in a flawless and quick double-clear round that launched them into a three-way tie for fourth behind fellow clear round holder Gemma Tattersall.

Our Australian hero and jokester extraordinaire Paul Tapner and Yogi Bear VIII added a rail that dropped them from fifth to ninth.

Because the time is virtually impossible to make at Chatsworth, there was plenty of shakeup as the riders proceeded in reverse order of go. We say “virtually” impossible because before today, only one rider had made the time in 1,000+ attempts.

Enter Australian Christopher “Guns Blazing” Burton and his lightning-fast TS Jamaimo, who came in clear and one second under the optimum time. This had them on the Event Rider Masters Kiss & Cry Podium for quite a while before he’d ultimately be caught by our leaders, finishing their day in sixth.

There were a few tumbles on course, including Sam Watson, Emily King, youngster Tom McEwen and Flora Harris, but all walked away uninjured from their scrapes. The biggest problem fence on the course was a water combination early on course, and several of the falls were wet ones.

Clark Montgomery and his Irish sweetheart Glen had a textbook cross country go with no sticky moments or bad distances — he simply couldn’t have gone any smoother or faster. The pair’s accumulated 8.8 time penalties dropped them from fourth to a respectable ninth place. 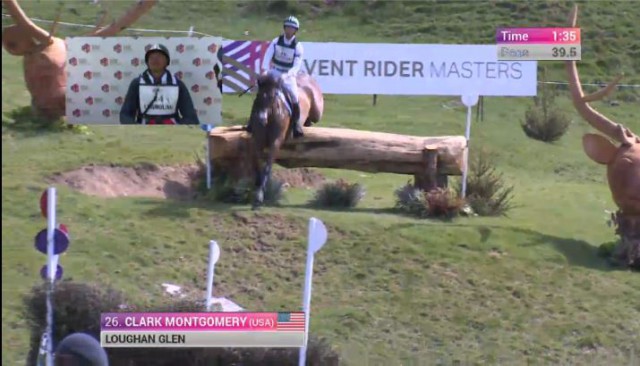 Kitty King was our overnight leader, and it became almost immediately clear that she was not going to make the time, and was opting instead to give her still young 9-year-old gelding Ceylor LAN a confidence-building ride with a comfortable rhythm. As commentator Lucinda Green put it, “this is a perfect ride, even if it may not be a winning one.” The two collected a total of 25.6 time penalties which dropped them from first to 17th.

Frenchmen Astier Nicolas was thrilled with his horse’s winning performance, saying, “His show jumping and cross-country was spot on today. It’s hard to make the time here at Chatsworth so I expected that the winner would need to post a quick cross-country and the final leader board could change dramatically.”

It’s also not the last we’ll see of the pair this summer at the top echelon of the sport, as Astier says the big aim for Piaf de Bneville is the summer Olympic Games in Rio.

Astier, Thibaut and Karim shared the victory podium in that order, and a solid dousing of champagne was endured by all. 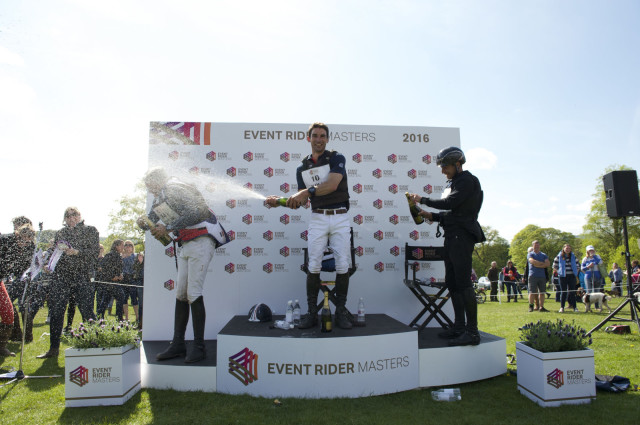 The next leg of the Event Rider Masters will be June 10-11 at the Bramham Horse Trials, where many of the same riders and a few new ones will be on their way to collecting points for the season championship across the six events. 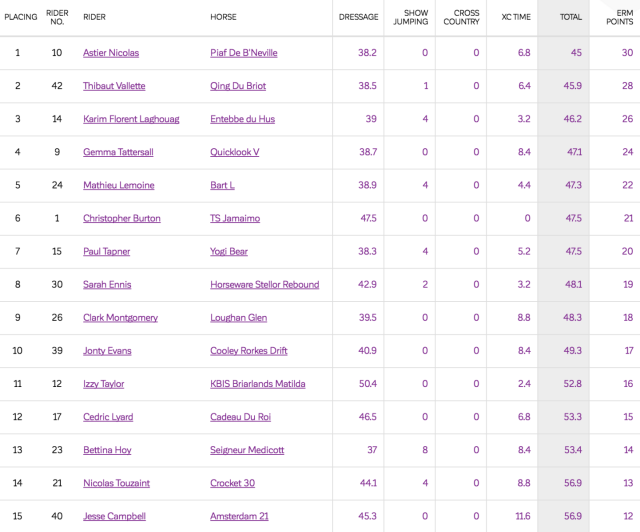