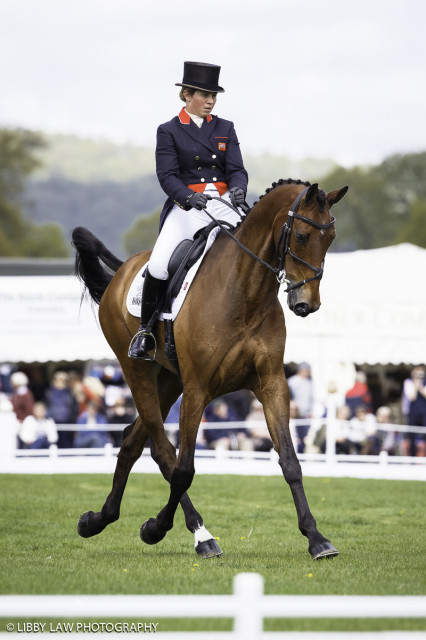 Day one of the first leg of the inaugural Event Rider Masters series is in the books, and British eventer Kitty King laid down an untouchable dressage score of 32.9 early on with her 9-year-old gelding Ceylor LAN. Kitty picked an ideal moment to peak, as this is nearly 4 points better than their previous personal best together of 36.7 in 2014.

“I am delighted we have knocked nine points off our personal best (Ceylor LAN and rider) at three-star level and what an occasion to do it at,” Kitty said in a statement. “This ERM class has delivered a serious competition and I know the riders will be hot on my tail tomorrow so we will be giving it our best.”

The next closest rider was Ireland’s Aoife Clark and Fernhill Adventure with a very accurate and floating test that earned a 36.6, ensuring that the leader won’t have a rail in hand going into show jumping in the morning. Bettina Hoy and Seigneur Medicott of Germany rounded out the top 3 on a 37.0. The pair took third last month in the Belton Park CIC3* and have been consistently shaving penalties off their runs together all spring.

Our sole American pair at Chatsworth, Clark Montgomery and Loughan Glen, are firmly in the mix with a score of 39.5, which has secured 11th place going into day two.

Less than five points separate second and 15th places. Other notables in the front pack are Brits Gemma Tattersall and Quicklook V (7th), Laura Collett and Pamero 4 (10th), Tina Cook and Calvino II (14th), and Australian Paul Tapner and Yogi Bear VIII who scored a 38.3, despite being quite nervous about their ERM debut:

Lisa Stone, Chairman of ERM commented: “Today has seen the first running of the ERM series and we are delighted with the engagement from not only the spectators at Chatsworth, but with eventmastersriders.tv, which received over 10,000 viewers from thirty five countries. It’s very encouraging for the series to have this level of engagement on an international scale.”

This will certainly not be the sort of event that ends on a dressage score. As our friends at EquiRatings mentioned earlier this week, only one pair has ever made the time at Chatsworth in more than 1,000 attempts; so likely the question is who can go clear in show jumping in the morning and finish clean with the least time penalties in cross country in the afternoon.