Dutton family triple-threat incoming! Phillip Dutton leads both the CCI4*-S and CCI3*-S divisions at Carolina International with daughter Olivia leading the CCI2*-S. We caught up with the Duttons as well as other top-placed pairs contesting the event in Raeford, North Carolina this week. 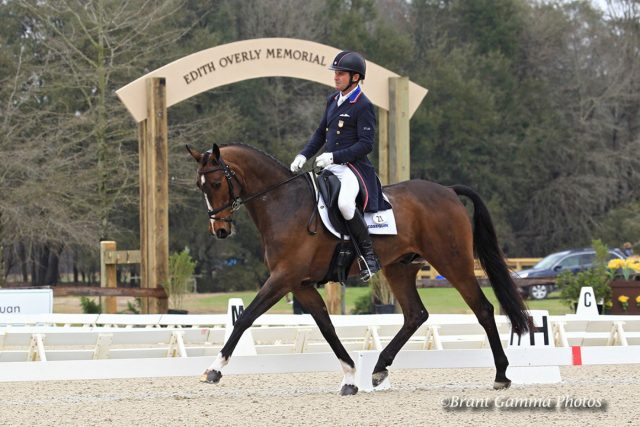 Carlchen who? Actually, Phillip’s new ride is quite well known internationally, having extensive experience at the 4* level on two continents under four previous riders. Bred in Germany, he began his career in Australia with Stuart Tinney in 2015 — they were long-listed for the 2016 Rio Olympics — before heading back to Europe to be campaigned by Francis Whittington, then Michelle Kenny of Ireland, then Lauren McLusky of Great Britain. The 13-year-old Oldenburg gelding (Clinton x Sunshine, by Lordanos) also gained some notoriety for having been previously owned by fallen financier Spencer Golding, whose implication in a major embezzlement case in the UK last year saw his extensive string of equine assets dispersed.

Carlchen was sourced by Carol Gee of Fernhill Sporthorses and purchased by Caroline Moran in the fall of 2019 for Phillip, but a minor injury and then the interrupted 2020 season drew out their getting-to-know-you period. They returned to competition in October 2020 and at Pine Tip in February blew everyone’s hair back with a record-breaking 15.0 on the flat in their first Advanced start as a pair. Today in the CCI4*-S, they topped the field with a score of 22.6.

“It’s still a work in progress,” Phillip says. “Obviously, he’s a talented horse and I feel very lucky to have him. We’re starting to get to know each other better and how he reacts and what I’ve got to do to get the best out of him. I still feel there’s plenty of room for improvement there, but it’s an exciting time to have a horse like this.” 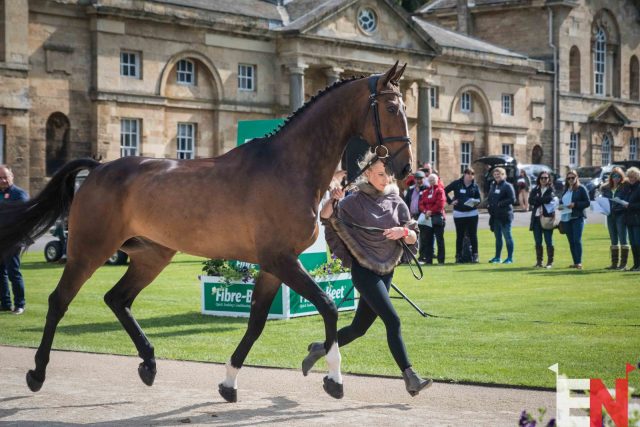 Ireland’s Michelle Kenny with Carlchen in 2018. Photo by Tilly Berendt.

“We’ve had him now about a year and a half, so I have been getting to know him, but I haven’t done much competition-wise with him. He’s a really interesting horse. He’s a quiet horse, but there’s a side to him where he has plenty of energy. He has some pizazz about him as well. I’m starting to understand that. He’s getting fitter and more conditioned, so he’s a bit of a different horse there as well. He’s not quite as easy as he was probably six months ago for me because he’s so much more fit and has so much more energy about him.

“I don’t know him that well yet on cross-country, so Saturday will be a different story. It’ll be a learning process there, but there’s a lot, a lot to like about the horse. He’s so athletic and so balanced. There’s not a great deal of difficulty about it him. It’s just a case of getting to know him and producing him well and for him to get to know what I expect as well.

“He’s still in his developing his strength and fitness stage, so he’s far from peaking yet, so Saturday will be a quiet cross country round but hopefully an educational one for him.”

Best of luck to this exciting new-ish pair. As Maggie Deatrick noted in her Carolina By the Numbers, Carlchen has talent written all over his record. With a career average of 29.6 in dressage, clear rounds in 11 of 15 stadium rounds with never more than a single rail, and primarily clear cross country rounds, the main thing left for Phillip to try improve upon is the horse’s pace across the country. 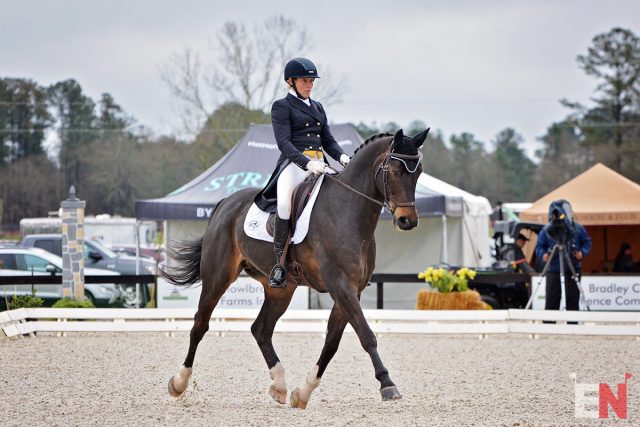 Liz Halliday and Fernhill By Night. Photo by Shelby Allen.

With Phillip and Carlchen taking it a bit easy on Saturday, all eyes will be on Liz Halliday-Sharp and Fernhill By Night to step into the top spot. They trail by only 0.4 of a point and Carolina is a charmed venue for them, having won the marquee division here in 2018 on their dressage score of 27.9. They improved on that by several points today, scoring a 23.0. (Liz withdrew Deniro Z, who would’ve have been right up in the mix, before dressage due to an abcess. By The Numbers originally had Deniro Z and Blackie ranked #1-2, respectively.)

Liz and “Blackie,” an 18-year-old Irish Sport Horse gelding (Radolin x Argentina XII, by Argentinus) owned by Deborah Halliday, are an old married couple who’ve found their niche in the four-star short format — their wins and top finishes at the level are too numerous to list.

“Blackie is 18 this year and he just really enjoys coming to the shows,” Liz says. And, clearly, he keeps getting better and better. Liz says she thought their score today was generous, but that he stepped up in some ways. “I think today he did the best changes he’s ever done.”

Youth is wasted on the young, isn’t it? Liz says she is playing it by ear with Blackie but that he shows no signs of slowing pace. After finishing third to Deniro at Liftmaster Grand Prix Eventing two weeks ago, she says Blackie came out the other side of the event feeling even better than when he started. “It’s fun to still have him out enjoying it.” It’s fun for us to see you two having fun, Liz!

She describes the track as a proper track from Ian (Stark, the course designer) — and make no mistake, they’re not here for a romp in the park. “We’ve come to try to win a prize,” Liz says. 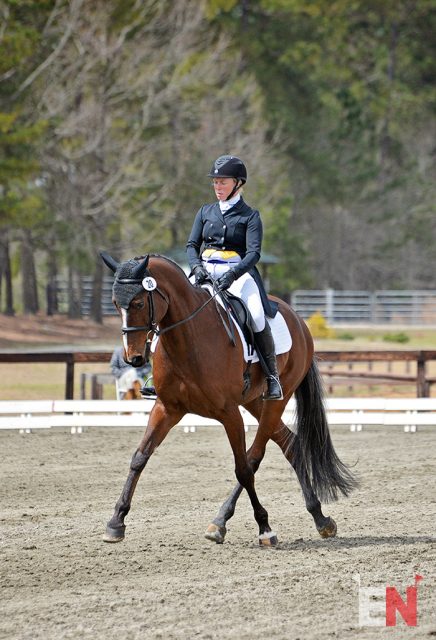 Fun is also the word that Colleen Rutledge uses to describe her ride on Covert Rights, a 15-year-old Thoroughbred cross (BFF Incognito x Let’s Get It Right, by Covert Operation) owned by FSG Inc. and the rider. They’ve been on an incredible ride together with many top finishes, most recently a 5th and 6th in the CCI4-Ss at Great Meadow and Stable View last far. This week at Carolina the pair are third on 27.0. Colleen is also in second in the CCI3*-S with C Me Fly, a 9-year-old Westphalian mare (Cristallo II x Hera, Heraldik XX).

“They’re both great fun to ride — you have to be pleased with them. They both put in solid tests with points still left on the table,” she told EN. 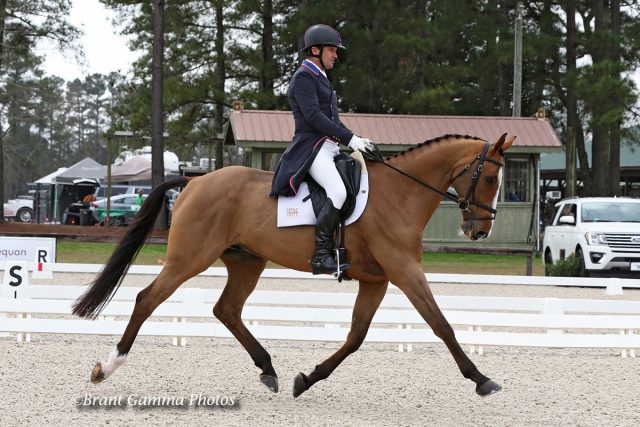 Phillip Dutton is also leading the CCI3*-S with Quasi Cool, a 10-year-old Holsteiner gelding (Quo Vados x B-Estelle, by Lord) owned by Caroline Moran, and he is 12th in the division with fan favorite OTTB Sea of Clouds.

“I had Erik Duvander helping me for a couple days last week, and it’s been really helpful,” Phillip says. “He just came to our farm and stayed there for a day and a half, so he got to know all of the horses. I think Sea of Clouds was the biggest beneficiary out of all of that. I’m really pleased with him. He did a much better test. I prepared him better than I did in Aiken, so that’s exciting knowing that I can do that with him. Quasi Cool is a cool horse. Hopefully he’s going to be a horse to be reckoned with once he gets up to the 4* and 5* level as well.”

Phillip and Liz Halliday-Sharp are 1-2 in both the CCI4* and the CCI3*-S — in the latter, Liz is second with Cooley Stormwater, an 8-year-old Irish Sport Horse gelding (Camillo VDL x Thornfield Calypso) owned by The Stormwater Group. They scored a 27.0.

“I was thrilled with him,” says Liz. “He’s still a young horse, only 8. He tries extremely hard; it was a tidy test and there were no marks lost.” Liz says that he’s a great jumper and that she’s looking forward to cross country. 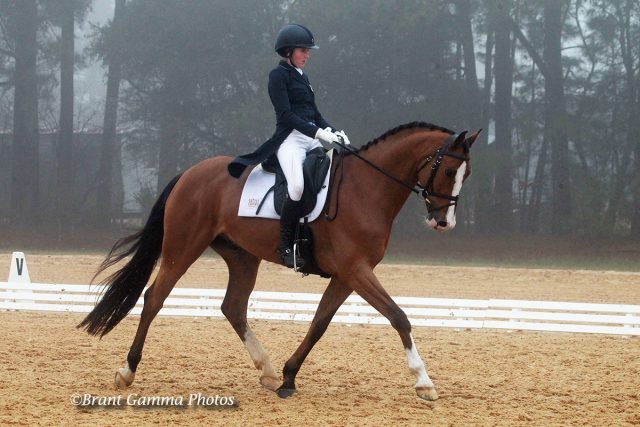 Olivia Dutton leads the way in the CCI2*-S with Iniesta, her own 8-year-old Dutch Warmblood gelding (Lordanos x Tilithya, by Voltaire). They lead the CCI2*-S on a score of 28.0. We’ve been rooting this pair on — you can read a sweet story Olivia wrote about their budding partnership here.

“There’s always room for improvement, but Iniesta’s very capable of putting in a good test if I can give him a good warm-up,” Olivia said. “I do love riding him dressage because he’s very naturally talented on the flat. We’ve worked a lot on show jumping this winter, so I’m looking forward to that too; we’ll try to do the best that we can and get a clear round. I’m kind of excited for everything. I love riding him cross country because he doesn’t get strong, and he’s much braver since I’ve gotten him. Hopefully it’ll end up being a good weekend!”

Phillip gave their test a nod of approval as well. “I thought it was good,” he said. “Certainly, he’s got unlimited potential on the flat — just the way he moves and the softness in his gait, and he’s a quiet horse. We’re excited about his future. We’re trying to bring him along gradually and see how far they can get together.”

Hugh Wrigley is 2nd with FE Santos, and Jordan Crabo — daughter of another five-star rider, Barb! — is third with FE Uncle Sam. So exciting to see the next generation of eventing stars rising.