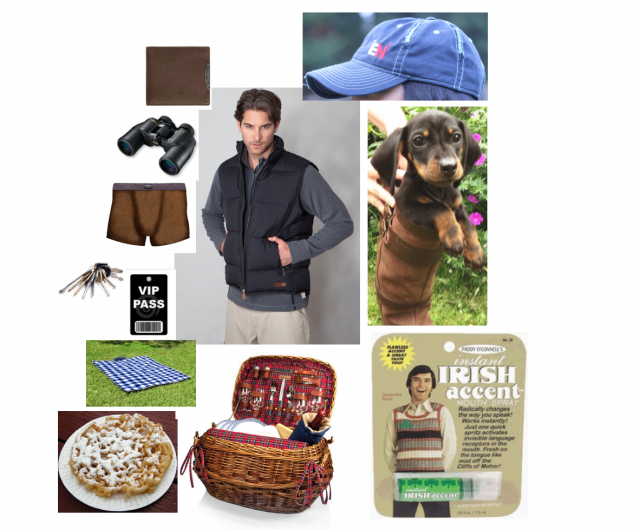 To give you final nudge to enter to win a pair of Dubarry Roscommon and Kerry Boots I took matters into my own hands to create a Perfect Rolex Outfit. Not for me, but for my new boyfriend. Let’s call him Mr. (Red on the) Right.

Mr. (Red on the) Right’s sporting a spiffy Dubarry Arklow Gilet. You can’t see his hands, as they’re in the vest’s snuggly pockets, but they are not adorned with any marriage-indicating accessories. He’s got the requisite EN cap, as he’s big fan of the site.

He’s got a puppy who he takes with him everywhere. He’s been known to take his Dubarry Galway Boot off his foot and let him play with it if the puppy wants to. Because he’s just that kind of guy.

Mr. (Red on the) Right speaks in a lovely Irish brogue (or Aussie accent; Italian’s OK too). He brings this fabulous picnic hamper because we can’t stay at the EN tailgate the entire day. There will be a fresh-from-the-deep fryer funnel cake in there because he won’t mind trotting over to the food area when I’m ready for it. A waterproof picnic blanket, of course.

Mr. (Red on the) Right’s got a VIP pass so I can join him “backstage” as he wishes his four-star rider friends luck. (It will be hard for me not to go into fan-dork mode). The key chain includes a few keys to the buildings on Mr. Right’s family equestrian estate and to the truck and trailer, which he lets me use whenever he wants.

With his wicked sense of humor — and style — Mr. (Red on the) Right rocks the Dubarry Men’s Leather Boxer Briefs, launched on April 1. According to the catalog, “Stylish and comfortable, they were developed for the Irish fieldsport of hurling in Craughwell County Galway by Fergus O’Reilly in 1865 and then benefitted from enhanced breathability with the addition of Gore-Tex lining in the early 1990s.”

Binoculars are handy, so we can stand right at the rope by the jumps, but also spot riders on other parts of the course. Even more handy is Mr. (Red on the) Right’s Dubarry Burren’s Men’s Wallet. It has six slots for his many credit cards and pictures of me, his puppy and his horses.

Unfortunately, as an employee of Eventing Nation, I can’t win the Dubarry boots. But I can meet Mr. (Red on the) Right! If you’re him (or you know him), I’ll be at the tailgate Saturday in sneakers, as I sadly lack Dubes. I have brown hair and might be sporting a sexy sling from a cross-country-related encounter with the Rocky Mountain ground.

YOU however, still have a chance of winning Dubarrys! HURRY! You’ve got until noon today!

Pin your version of the Perfect Rolex Outfit, including three pieces from Dubarry’s collection, on your preferred online board and tag it with #PinYourDubes14. Follow Dubarry of Ireland on Pinterest. Check out the official rules and use this form. 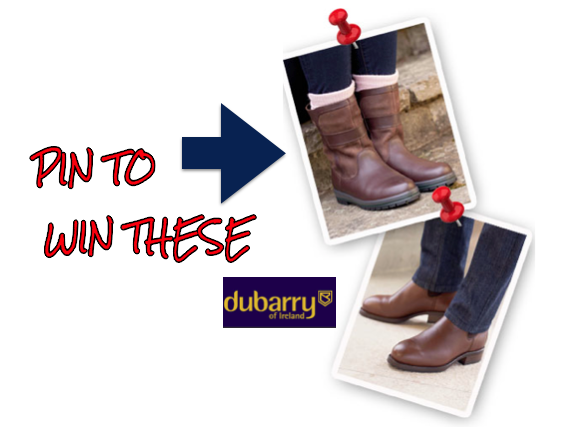