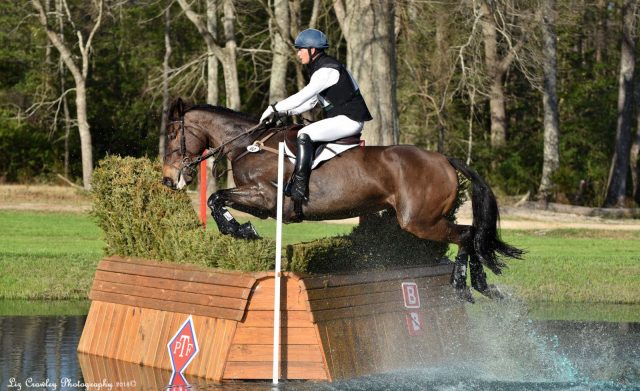 Being early the season, every combination is stretching their legs with a different goal in mind. Some are looking for qualifications, others are preparing to move up, and still others are new to the level or knocking the rust off after winter. For that reason, cross country time penalties came in to play in each division as some horses need a good fitness run and some horses just need a quiet, confident canter around. Whatever the objective, Pine Top’s wide open gallops, world-class courses and #gooddirt is a great place to start the season.

Jonathan Holling and the Two Doors Down Group, LLC’s 9-year-old Irish Sport Horse mare, Sportsfield Two Doors Down, started out in eighth place in the CIC2* after dressage. After a double clear show jumping round over Chris Barnard’s testing course in a large grass arena, they carried a two-phase score of 32.8 through to the Derek di Grazia designed cross country course. Adding just 1.2 time penalties in the final phase, they moved up to win the division by narrow margin.

Holly Payne Caravella and the elegant gray CharmKing, owned by CharmKing LLC, were second after dressage on 30.4. A single rail dropped them to fifth place and while they were one of only a handful of pairs to finish inside the time on cross country, putting them on a final score of 34.4 for second place in the 7-year-old German-bred Holsteiner-TB’s first start at the level.

Emily Beshear and Jennifer Eisenbrandt’s 11-year-old Oldenburg, Olney Uncle Sam, were another pair to have a fault-free cross country run, finishing right on the optimum time of 6:19. They added only four faults from show jumping to their dressage score, placing third on 34.5. 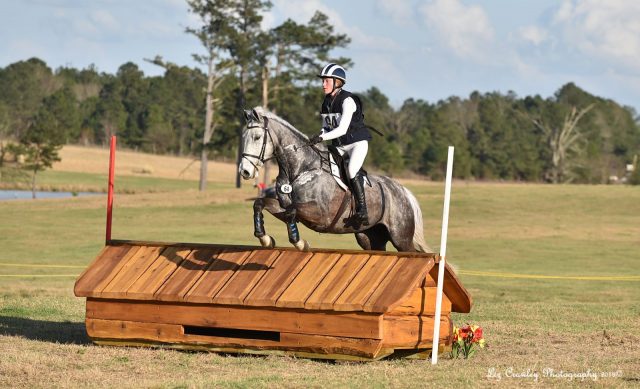 Lindsay Beer (CAN) and Penny Beer’s 16-year-old Trakehner, El Paso, moved up from seventh after dressage to finish in fourth, having added 2.8 cross country time penalties for a final score of 35.3. Dressage leaders Boyd Martin and Christine Turner’s 11-year-old Trakehner, Tsetserleg, were clear in both jumping phases but added 5.6 time penalties across the country, finishing fifth.

Sixth place Katie Lichten and Harold Lichten’s 12-year-old Hanoverian, RF Luminati, were one of only two pairs in the division of 22 starters to finish on their dressage score (36.1) in their very first attempt at the level. The other combination to earn an FOD was Nilson Moreira da Silva and L&N Equestrian’s 12-year-old Thoroughbred mare, Lady Colina, who moved up from 22nd after dressage to finish in 12th on 44.5.

Looking to the CIC*, Katie Lichten had another great result, winning the division on her dressage score of 27.8 with her 8-year-old Irish Sport Horse, Sapphire Blue B. They were second after dressage but moved ahead of Jonathan Holling and Team Holling LLC’s 7-year-old Holsteiner mare, Dalanteretto, who added 2.8 time penalties on cross country for second place and a final score of 28.6.

Liz Halliday-Sharp and Anna Kjellstrom’s 9-year-old Thoroughbred, Run Marvin Run, were sixth after the first two phases, adding a rail to their dressage score of 32.0, but a fault-free cross country run moved them up to round out the top three in the gelding’s first FEI appearance. 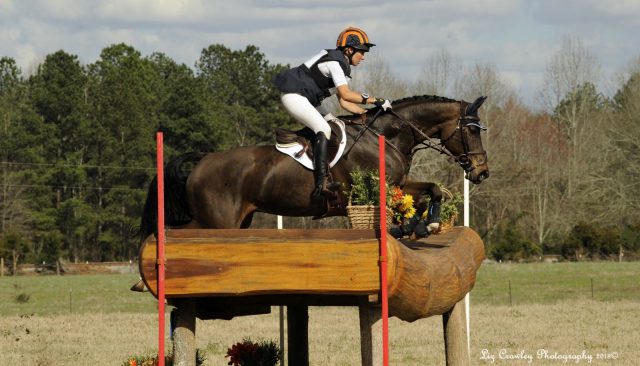 Two Advanced divisions were split based on which dressage test was ridden (Test A or Test B). Twenty-five horses started in division A while 12 horses practiced the more difficult Test B as they gear up for a big spring season.

Liz Halliday-Sharp claimed the top two spots in Advanced A. She led from start to finish with her long time partner Fernhill By Night, a 15-year-old Irish Sport Horse owned by Deborah Halliday. They finished on their dressage score of 26.6. The Deniro Syndicate’s 10-year-old Dutch Warmblood, Deniro Z, tucked into second behind his stablemate with a 33.2.

Kim Severson and the Cross Syndicate’s 11-year-old Irish Sport Horse, Cooley Cross Border, scored a 27.0 to sit second after dressage. A handful of time penalties on cross country put them on a finishing score of 33.8 for third place in the gelding’s first FEI run since winning the Blenheim CCI3* last September.

Doug Payne took fourth with Vandiver, a 14-year-old Trakehner owned by Doug and his wife Jessica along with the gelding’s breeder Debi Crowley, who was running his first event since finishing 14th in the Blenheim CCI3*. Doug also placed fifth with Lisa Wall’s Oldenburg, Getaway, in the 11-year-old’s first Advanced run. 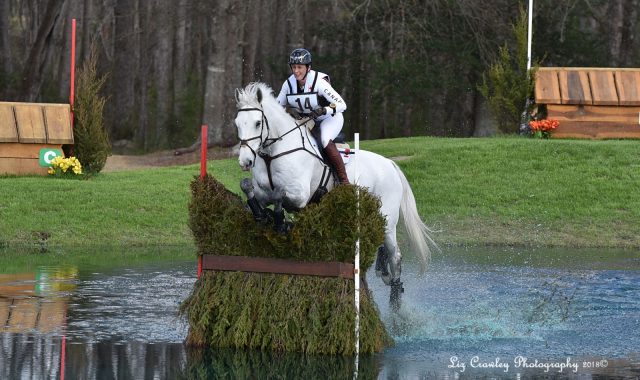 In Advanced B, Colleen Loach (CAN) and Peter Barry’s 14-year-old Selle Français, Qorry Blue D’Argouges, moved up from third after the first two phases to finish second on 39.5, adding only 2.0 time penalties on cross country.

Colleen Rutledge and her 12-year-old homebred Clydesdale/Thoroughbred, Covert Rights, led the division after dressage and a show jumping. They added 11.2 time on cross country for a 42.9 and third place in their first run since the Fair Hill International CCI3* last October, where they finished ninth..

The Intermediate, Preliminary and Training competitors get underway with their competition bright and early Saturday morning. Click the link below to follow live scores and find Pine Top Eventing on Facebook for live updates and video clips from the event.

EN would like to extend a warm welcome to Liz Crawley, the new official photographer of Pine Top Farm Horse Trials. You’ll recognize her work from Chattahoochee Hills, FENCE and numerous other events in the Southeast. Check out her website and order competition pics at www.lizcrawley.com and follow Liz Crawley Photography on Facebook. 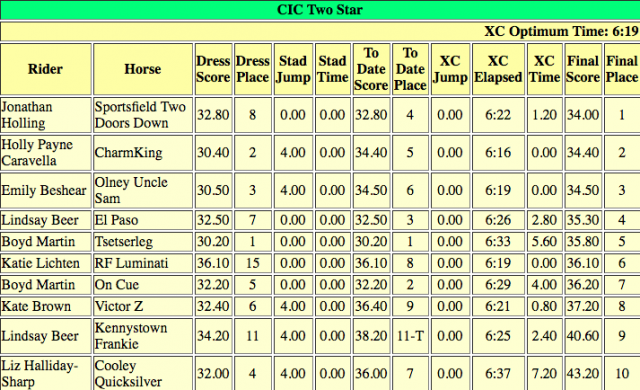 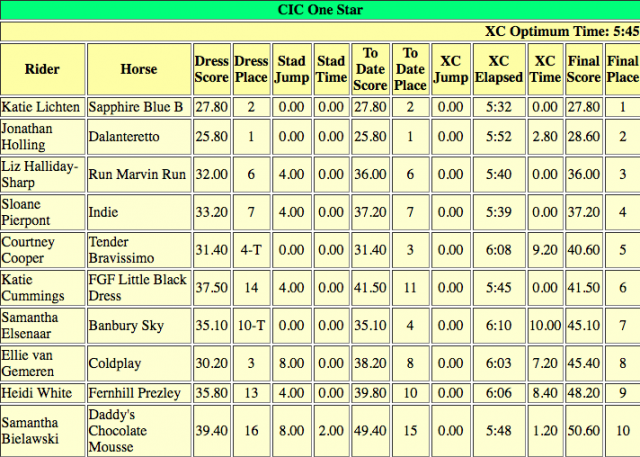 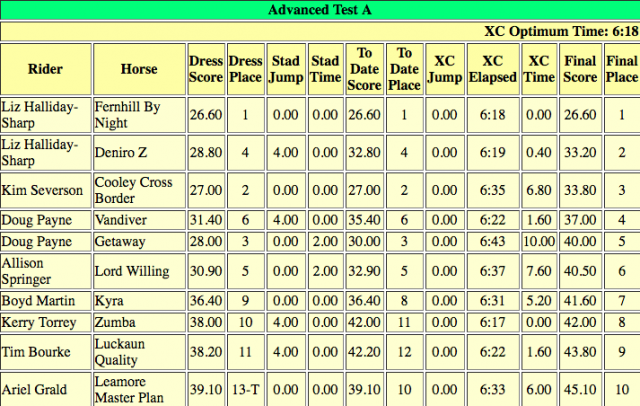 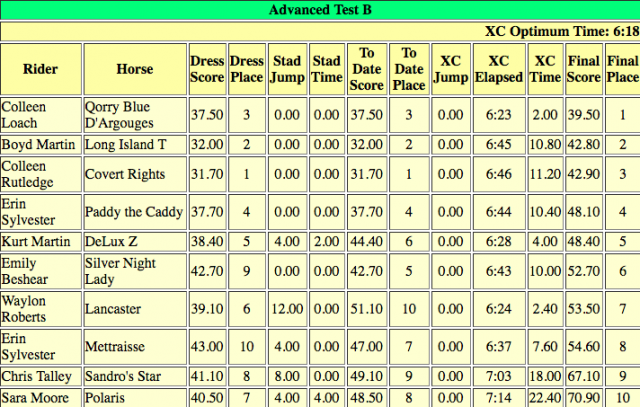