EN TRENDS:
This write-up is being posted so late because advanced division finished XC at 5:00 this evening.  The weather in Georgia this afternoon was mild; the sun was warm and the wind was cold.
Pine Top (GA): Homepage, Times/Scores, Weather
(1) From what I heard, the advanced division was moved to late in the afternoon because of concerns about morning shadows on some of the jumps.  There are two sides to every story, and I have not heard the organizer’s perspective, but many of the riders said that the afternoon shadows and setting sun caused issues on the course anyhow. 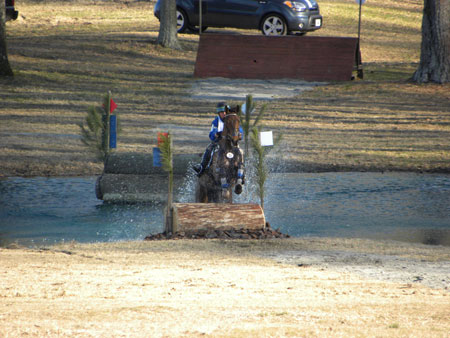 Ashley Adams and Vaunted in the shadows
(2) If you watched the live scores throughout the day, I’m sure you noticed a lot of issues.  According to the scoring, there were 12 rider falls, and I know of 4 horse falls, and 3 trips to the hospital for riders.  I’m not sure if that count is exact, but there were a lot of issues, especially in the prelim and advanced.
–Jan  Bynny took a spill in the prelim before I arrived and got a ride to the hospital.  The word around the barns is a broken wrist, some ribs, and a concussion.  Note: when I say ‘word around the barns’ I think we all know what I mean, but don’t take it as hard fact.
(3) Rebecca Howard and Roquefort flipped over a pretty vertical gate fence about 70 feet from where I was sitting with everyone else.  Roquefort walked away, and Rebecca was put into an ambulance.  Again, the ‘word around the barns’ is a couple of broken ribs, collar bone, and a punctured lung.  When you’re standing by something like that, your first reaction is to run over and help, and then when you see enough people are already there, all you want to do is sit down.  Fortunately, Jan and Rebecca are both super athletes and should make a speedy recovery.
(4) Karen had a fall in the prelim, suffered a mild concussion, and decided not to run her later horses, including Mandiba.  Karen is one of the toughest people in eventing, and I know she will be back on Mandiba well in time to accomplish their Spring goals.
(5) Ok, my apologies for all that bad news, this was obviously an uncharacteristically rough XC day, but the good news is that, to my knowledge, all the horses were fine.
(6) Boyd and Remington XXV had an extremely impressive trip around the advanced because they were held twice for long periods due to rider falls and still delivered a great round.  Ashley Adams was also held for a long time and handled it great.
(7) Of the four A-listed horses at the event, Will and Twizzel looked polished around the intermediate, Boyd and Neville took it easy around the intermediate (I think we all know Boyd can make the time with Neville whenever he wants), Woodburn looked calm, cool, and collected around the advanced, and Tru Luck withdrew.
(8) For the B-listed horses, a few withdrew due to rider injuries, and the only B-list starters were Will Faudree and Sinead Halpin.
(9) Of the A and B listers, I guess I was most impressed with how focused and listening Woodburn looked.  When Woodburn pays attention to Phillip, nothing will stop them on the XC. 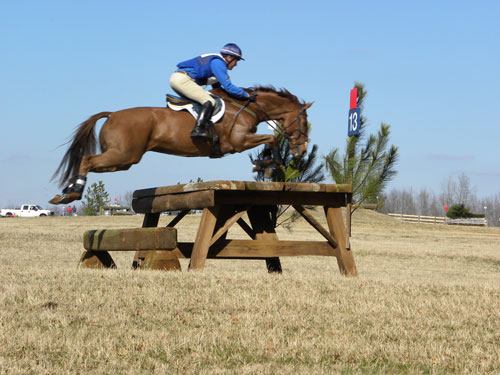 Woodburn
(10) Steph Rhodes-Bosch and Port Authority were the only advanced pair at Pine Top to finish the weekend on their dressage score, and had the best looking Canadian XC round, in my opinion.  Michele Mueller also had a great weekend for the Canadians, winning her division.
(11) One rider’s nervous mom sent me an email asking for an update on her daughter, which I was happy to provide.  I only mention this to point out that if anyone (especially a nervous mom) has special requests for updates at events that you know I am covering, please shoot me an email and I will do whatever I can to oblige.  I always feel like parents have the toughest time at feeling the nerves, far tougher than riders.  My kids are going to play soccer.
(12) While I am thinking about live coverage, it reminds me that we have gotten multiple requests to bring back the live blogs.  Please know that we have every intention of doing so, but we just didn’t want to wear out the format over the winter.  Also, an afternoon of live blogging leaves me exhausted, whereas sitting around watching XC and chatting with everyone is my idea of a good time.
(13) Several big name horses from the past few years had a good weekend.  The Foreman beat his stable-mate and A-listed Woodburn.  Courageous Comet won in the advanced, and Tipperary Liadhnan won in the intermediate, and Norther Spy coasted around the intermediate. 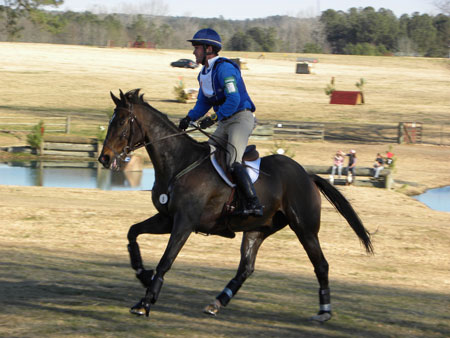 (14) Course designer John Williams posted two clean rounds in the advanced on Carrick and Sweepea Dean.
(15) If you send me a text that says “haha, we just beat you guys in overtime,” yes, I will reply with something like “super, what’s your GDP eh?“
(16) The Pine Top announcer (I wish I knew who it was) did a great job keeping things fun/interesting, and, most of all, thanked the volunteers multiple times.
-Update: Chris was kind enough to post that the announcer was Nicho Meredith on our FB wall.-
(17) As we have mentioned EN guest writer Holly Hudspeth sat out the weekend due to an injured wrist, but Boyd did a fantastic job catch-riding Cold Harbor and Stewie, making an incredibly hard task look easy.
(18) The inflatable safety vests seem to be catching on faster than I would have expected due to their expense.  I probably saw 40 of the inflatable vests, and maybe 20% of the advanced riders were using them.
(19) Fleceworks Mystere Du Val continued his winning ways, posting the lowest advanced score of the weekend.
(20) As a brief note, Amy Tryon and Leyland were entered at Twin Rivers, according to StartBox as of Thursday night, but they were not shown in the competition scores, probably meaning that they withdrew prior to the competition.
Until our N&N sometime Monday morning, go eventing.
0 0 votes
Article Rating
Subscribe
Login
Please login to comment
0 Comments
Inline Feedbacks
View all comments
More Insanity on Horse Nation >>