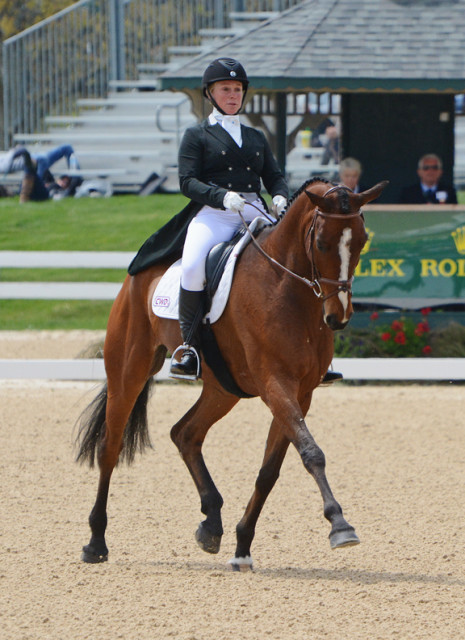 It’s no secret that Colleen Rutledge has never been named to a USEF High Performance Training List, a fact our readers have often lamented each time a new list is released. She’s been invited to train with Coach David O’Connor at the training sessions aboard her homebred Covert Rights, but never officially listed.

So it’s something of an understatement to say today proved to be poetic justice when Colleen and “CR” blew every other American out of the water at the Rolex Kentucky Three-Day Event, scoring 42.3 to sit in fifth overnight as the highest placed rider from the U.S. after dressage.

For a bit of perspective on how impressive that score really is, 42.3 is four points better than Lauren Kieffer and Veronica’s score from last year’s Rolex; as you know, that talented combination went on to be our four-star national champions. So how exactly does it feel for Colleen and CR to have set the bar so high in the horse’s very first CCI4*? 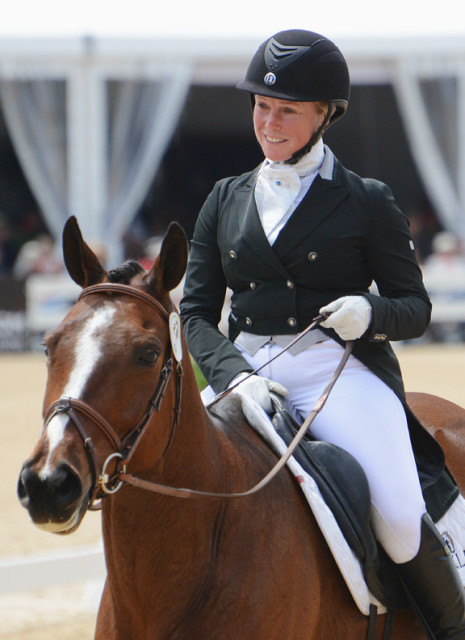 “What I’m most excited about is he took the atmosphere and made it work for him instead of against him like he did at Fair Hill. That makes he happy because it makes me think that next year he’ll come back into the ring and say, ‘I’ve got this, mom,’ and give me a whole other level.”

Colleen bred CR out of her first Advanced horse, a chestnut Thoroughbred mare named Let’s Get It Right, by Covert Operation. “CR” is a 9-year-old Thoroughbred cross gelding by Lisa Reid’s BFF Incognito, a Thoroughbred/Clydesdale stallion.

As for how it feels to be the highest placed American in such a star-studded international field, Colleen said she’s not focused on a number so much as she’s focused on how CR rose to the occasion when it really counted.

“I’m thrilled with the test. It matters less to me where I’m placed right now, and it matters more that he went in and did his job and did it well,” Colleen said. “When you’re going to pick a day to step up and give me that, you picked a good day. I’m super happy that he came to play today.”

The crowd knew they were in for a treat when Colleen and CR were trending in the 80% range through the first few movements. By the time Colleen started the extended trot down the diagonal, she knew she could push for more — and she did.

“The funniest part of the entire test was about four steps after we started the extended trot, and I heard someone go, ‘Wow.’ So then I thought, ‘Wait for it, there’s another gear — click, click.’ I just got a smile on my face and thought, ‘Let’s go.'”

And “let’s go” they did. Congrats to Colleen and CR on the tremendous performance in such incredible company. EN talent spotted this horse back in 2012, so it’s a happy day for us too. We wish them all the best on cross country tomorrow.