In the immortal words of Outkast’s André 3000: “You can paint a pretty picnic but you can’t predict the weather.”

In the immortal words of Michael Jung: “We will see.”

The top-three placed competitors after Rolex dressage are all veteran four-star champions. And they understand better than anyone that in this sport that the best laid plans aren’t bulletproof — or even waterproof.

Michael, currently tied for first, uttered “we will see” twice during yesterday’s press conference and once again today, and the statement gains credibility with every repetition.

For three little syllables, “we will see” covers a surprising amount of ground. It sums up a competitive game plan that sounds simple — just take things one step at a time — but must be deceptively unnerving. Athletic success is predicated on micromanagement, careful attention to all the minutia that adds up to the difference between being good and being great. Simultaneously hoping for the best, planning for the worst, and being OK wherever you land on that spectrum is an impressive mental juggling feat.

No one in today’s press conference dwelt too much on the dressage competition — because, at the end of the weekend, it’s not one. When asked about his test on La Biosthetique Sam FBW, Michael’s response was short and sweet. The horse was a bit nervous in the half, reinback and canter depart, Michael said, but “everything else worked well so I’m happy with him.”

Likewise, co-leader Tim Price was complimentary of his horse, Wesko (barn name “Dash”), the 12-year-old Dutch Warmblood gelding upon whom he won Luhmühlen last year. He said the horse had been going well in the lead-up this week and that the atmosphere of the stadium today gave him a little extra “oomph” in the test. But Tim’s focus seems already to have shifted toward the next phase, tomorrow’s cross-country course. 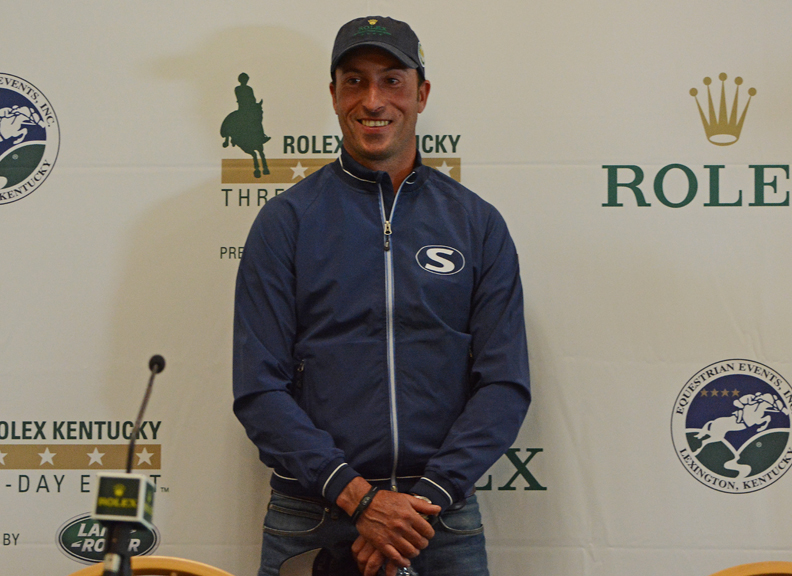 Tim said he has been studying how successful riders navigate the course for years and believes tomorrow’s course will follow suit: “Rhythm reins supreme.” He thinks it will suit his horse and elected to bring Wesko stateside in pursuit of a confidence-building, successful result after a boggy course got the better of them at last year’s WEG in Normandy.

“The World Games didn’t go to plan,” he explained. “I think the ground there was not for every horse. He struggled his way around and didn’t complete so I’d really wanted something where we might be able to avoid a similar thing happening because he deserves to have an enjoyable experience.”

The riders expressed optimism that the ground will hold up come what may, weather-wise, tomorrow. “I think it would be able to withstand a fair bit of rain before it starts to impact the going,” Tim said.

… but the riders are prepared to adjust their plans accordingly. Tim mentioned slowing down around a couple of the tighter turns if need be, especially toward the end of the course when the horses might be tired and a bit strung-out.

William Fox-Pitt, who sits in third on 2014 Rolex winner Bay My Hero, also acknowledged that the competition has only just begun. “He’s had a little bit of a holiday so far,” he said of “Moonie,” followed by the understatement: “There’s a bit more work to do.”

William says the course looks strong and, come rain or shine, should prove a real test of fitness. “I think it will be quite tiring,” he said, noting that even without rain “the ground is soft and it will be demanding.”