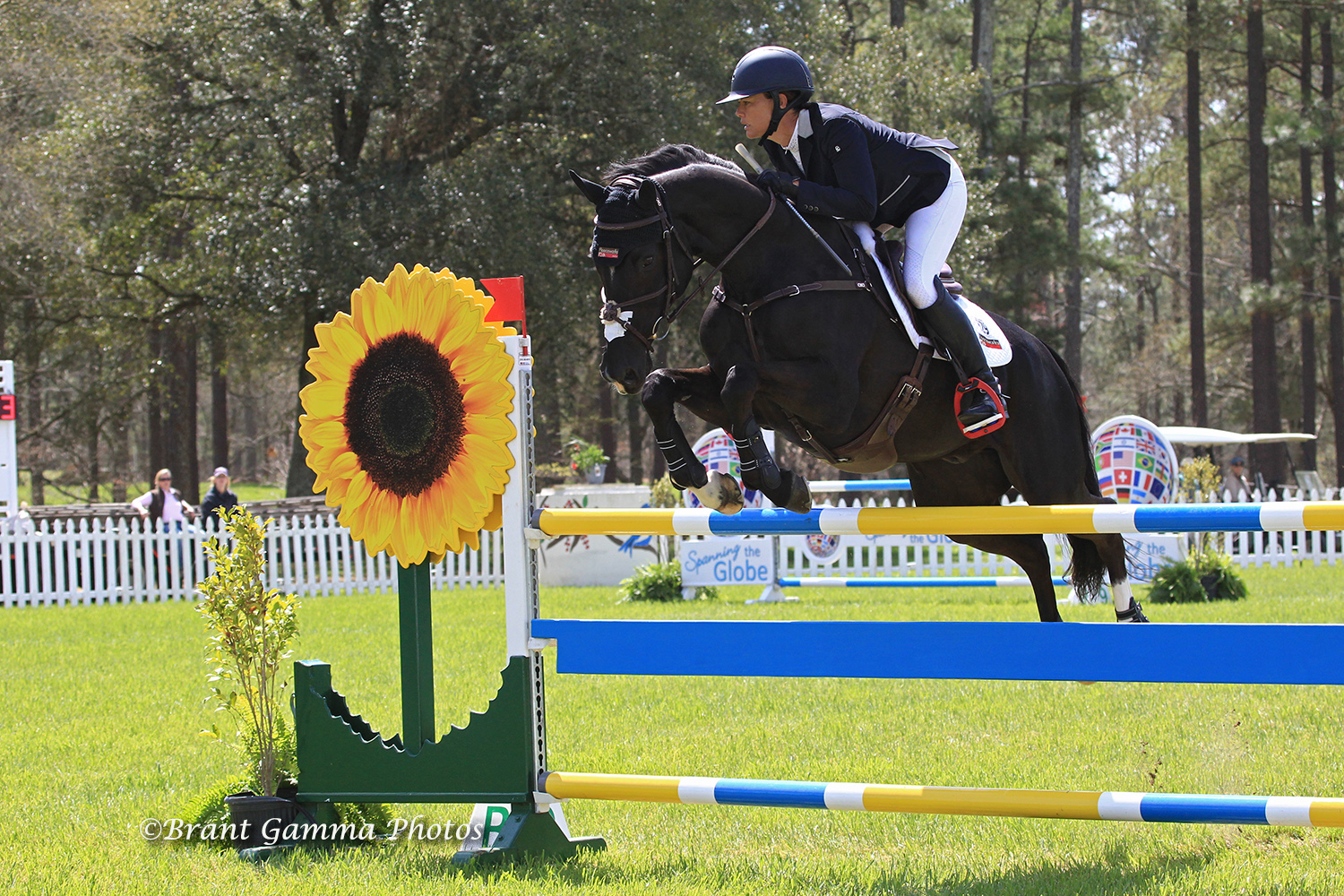 Historically speaking, the show jumping phase at Carolina International in Raeford, Nc. has produced a healthy number of clear rounds inside the time. In 2021, a total of 14 pairs delivered double clear efforts for a 41% clear rate. The 2019 event (the event was canceled in 2020 due to Covid-19) saw 17 of 43 pairs jump double clear for a 40% clear rate. This year? Four pairs out of 31 starters managed to leave the poles up and stop the clock in time, giving this year’s event a mere 13% clear rate.

Rails were fairly scattered throughout Marc Donovan’s winding track, though a related question at fences 6 and 7AB caused a consistent number of difficulties with eight riders having the upright, narrow bicycle vertical at 6 down and seven riders having 7B, the out of a two-stride, down. Several riders also encountered difficulty in the triple at 10ABC, with 10A coming down most frequently (6).

Time also proved to be a factor, though more combinations stopped the timers inside the optimum despite having one rail than in 2021 — four riders had no rails but were unable to stay inside the time, including overnight leaders Tamie Smith and the Ahearn family and Eric Markell’s Mai Baum (Loredano – Ramira, by Rike), who added .8 time penalties but maintained a healthy cushion in the lead. Originally, she had chosen not to run “Lexus” as the 16-year-old German Sport Horse gelding preps for Badminton in May, but she’s been eyeing Ian Stark’s track with a gleam in her eye all week.

“Maybe throw in some suspense right now, because I might just give it a go!” she laughed after her show jumping, giving us all a glimmer of hope that we’d get to see her rip and roar around tomorrow after all.

But, a strategy is a strategy, and Tamie informed us later on that as much as she wants to have a crack with Mai Baum tomorrow, she’ll be sticking to her original plan of withdrawing. Instead, she’ll do her last stateside prep run at The Fork at Tryon in early April. 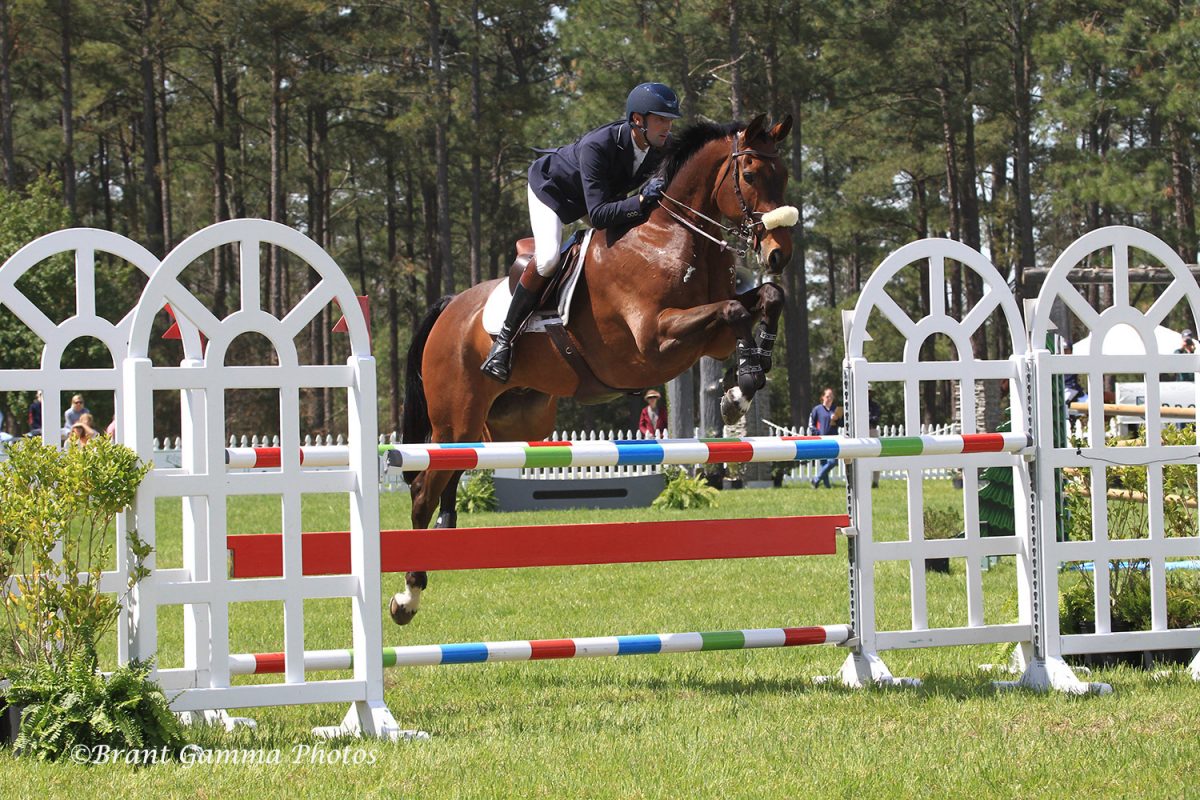 Will Coleman and Dondante. Photo by Brant Gamma Photography.

This will leave Will Coleman and Team Rebecca LLC’s Dondante (Pachio – Muckno Clover, by Euro Clover) in the driver’s seat, but a clear round will also need to be fast against the optimum time and remember: this event is still a setup for bigger things to come this spring. We’ll find out tomorrow who’s planning to ride for the win and who’s planning to play it safe.

Despite the influence of the show jumping in terms of clear rounds, the original top three after dressage remained unchanged as both Will with Dondante as well as third-placed Doug Payne with Laurie McRee and Catherine Winter’s Starr Witness (Chello II – Carmen, by Veneur) added no penalties to their starting marks.

“Al jumped well today. We were trying a little bit of a different setup and we are sort of still playing around with it getting ready for the Kentucky CCI5* but he is a real trier,” Will said. “Tomorrow is a big test and Ian Stark has laid out a different test this year. It’s big and it is a real 5* prep but that’s why we come here. I am looking forward to having a crack at it.”

Doug Payne also laid down the first double clear of the day with Quantum Leap to “leap” into the top 20 heading into tomorrow (yeah, okay, I know that was a lame one).

“Today I thought the course was really well designed and built. I was certainly appreciative that the ground jury stuck to the snug time allowed as it’s a good preparation for other events this spring,” Doug said. “The horses jumped well and I was really happy with all of them. It was a big atmosphere for them to jump in but that is why we are here. I think tomorrow’s course looks great. Ian Stark has changed up the track and it’s nice to have something a bit different. He does a good job preparing them for the bigger three days to come. The ground is excellent and I am looking forward to it.”

Advancing into the top five after a beautiful round are Marc Grandia and Team Rebecca LLC’s Campari FFF (Camiros – Tanner, by Ariadus), who added 1.6 time penalties but no rails to move from seventh into fourth position. Hailing from Washington State, where he runs Full Gallop Eventing with his wife and fellow eventer/coach Erin, Marc is also an ICP-certified instructor with a full roster of students as well as a licensed cross country course designer.

Marc’s had an extensive competition career, but Campari FFF is the horse that’s brought him to the cusp of his first CCI5*, which he hopes will be at Kentucky next month. They’ve spent a good amount of time competing on the East coast — a test run, Marc called it — finishing fourth in the inaugural CCI4*-S at TerraNova last fall as well as ninth in the CCI4*-S at Tryon in November.

But 2022 has not started off in the most ideal fashion, as Marc originally intended to prep for Kentucky on the West coast. But then, the California EHV-1 outbreak forced the cancellation, out of abundance of caution, of his first Advanced run at Twin Rivers, where he and Erin also base for the winter. So Marc and Erin decided to send eight of the 11 horses they’d brought south back home, taking three on the road to the East coast.

“I think I called everybody I know, and the consensus was that all the events out here in the spring are good, but if you want to go to something hard — which I wanted my horse to do — then I should come to Carolina,” Marc said.

Marc calls Campari FFF, who was purchased by Team Rebecca LLC as a five-year-old and has been produced from his first Novice event on by Marc, “a career-changer” as he eyes his big goal next month. He’s not here to win this weekend, he says, but he hopes a nice test will set them up well for their 5* debut, and the first two phases of the weekend have encouraged him — despite all the changes in plans.

“I’m not quite sure how to describe it when you have to travel all the way across the country and send the other horses back home,” Marc said. “But to come out and still have all systems firing feels really good.”

Completing the top five and still locked in a tie that began yesterday, Sydney Elliott and Carol Stephens’ QC Diamantaire (Diarado – Lantana, by Sandro Hit) and Will Faudree aboard Jennifer Mosing and Sterling Silver Stables’ Pfun (Tadmus – Celerina, by Cento) each lowered one rail for a two-phase score of 32.8. 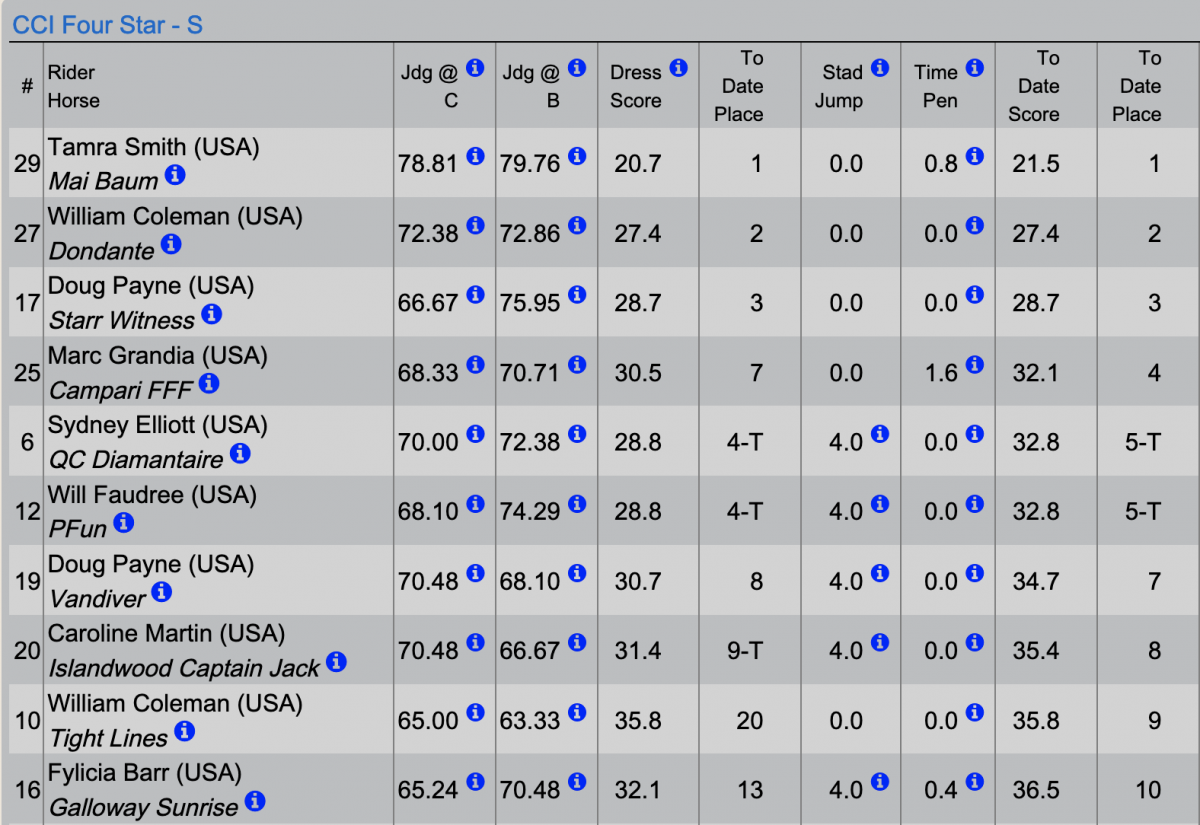 Looking to the other divisions that jumped today, here are your leaders: 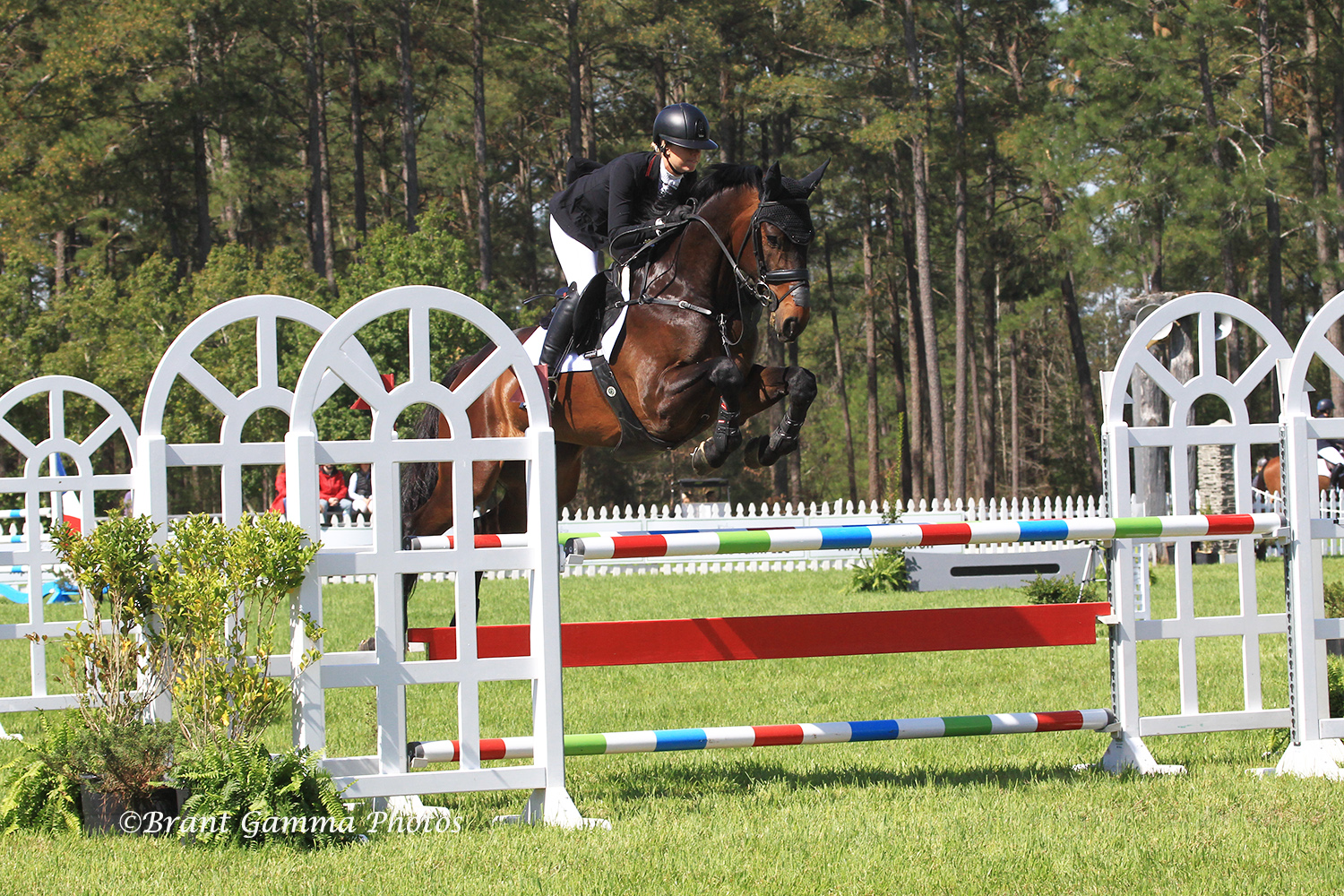 “I was really pleased with all of my horses today and their efforts in the show jumping phase,” Caroline said. “I have been taking lessons with my longtime show jumping coaches, Anne Kursinski, Kim Perlman, and Erik Duvander, who have really helped me develop the horses and get them stronger at the level. It was great to be able to carry everything we have been working on at home to the warm up and then into the ring. I think the cross country courses look strong yet fair. The ground is perfect, and the team here has done an incredible job so I am looking forward to having a crack at it tomorrow.” 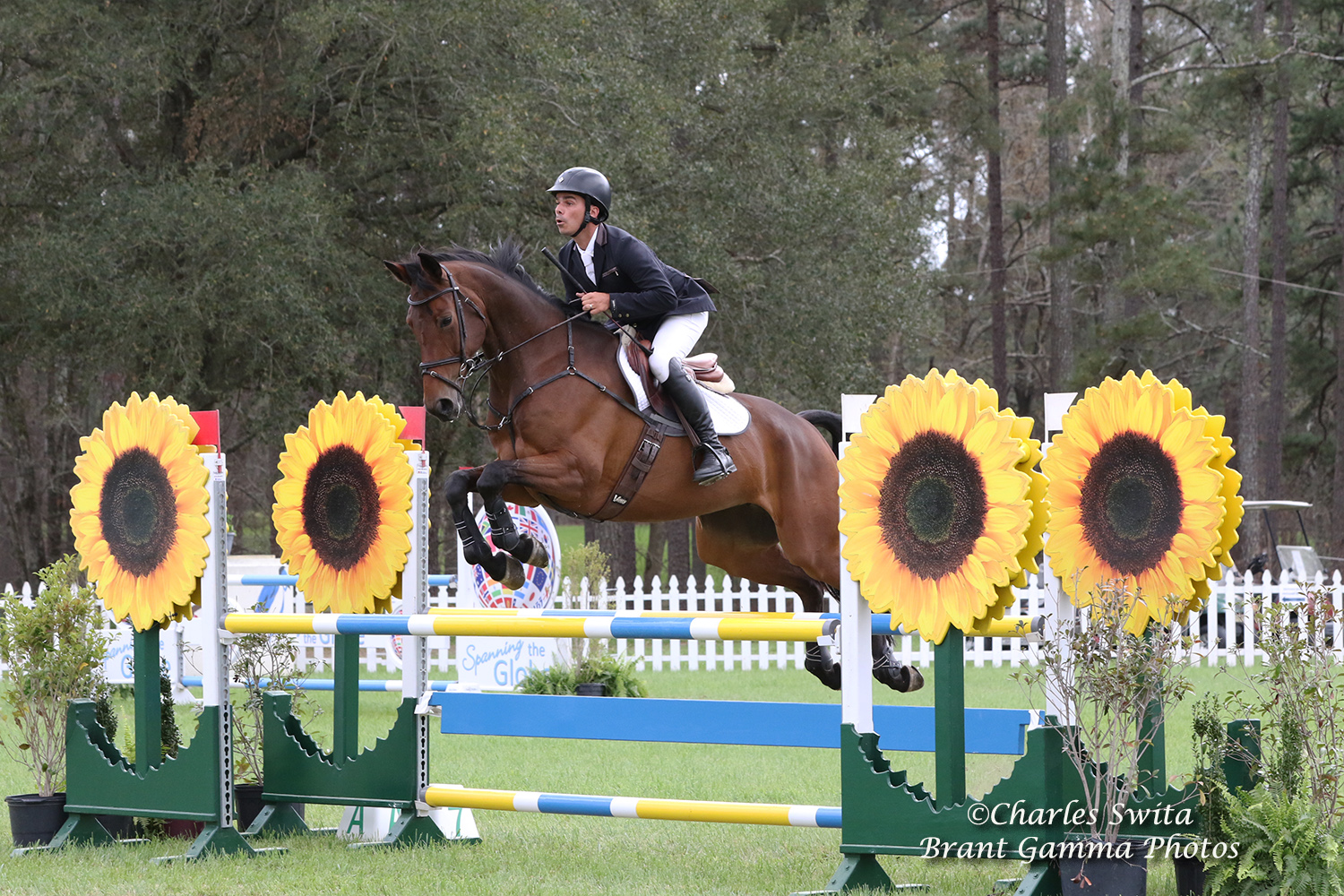 “Quodrocana was incredible today and I think she is the best horse in the United States with really great owners as well,” Dom said. “The course for tomorrow looks good and educational. I like them to be able to answer these questions in preparation for long formats later in the season and I think the way they have changed the flow of the course really encourages them to get in a good rhythm. I was looking for something that was going to really boost her confidence and it is very much true to the level.” 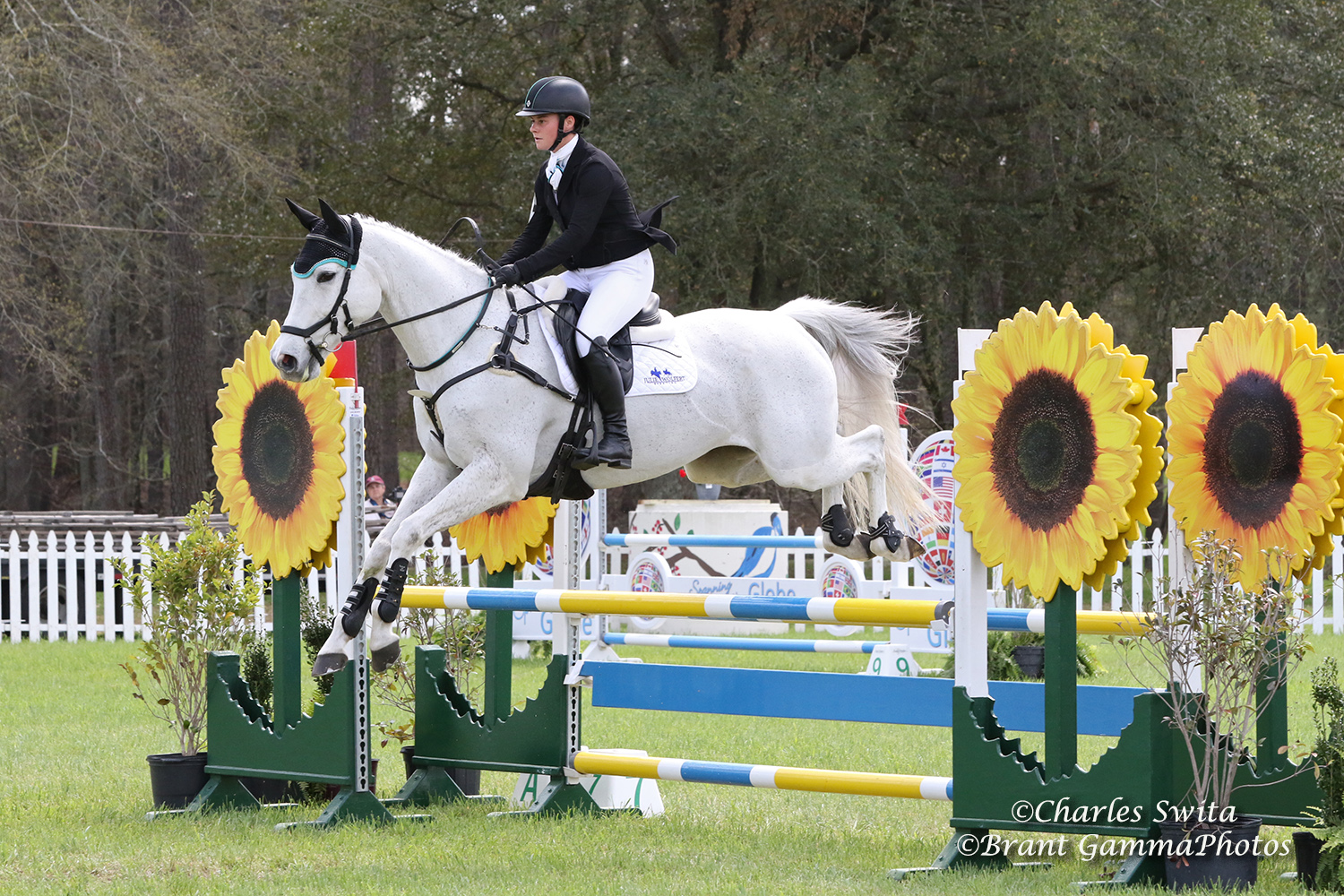 “This is our first FEI, and my horse was amazing today,” Olivia said. “It was super fun and a big atmosphere, but my horse really showed up. He jumped the moon for me, and it was such a good feeling. Andrew McConnon has been helping us and his guidance has been so helpful. Tomorrow’s course is pretty open and there are a lot of good questions and lots of galloping so it should be fun.”

And finally, there is also a small-but-mighty Advanced division running this week, and Boyd Martin currently holds the top three positions after dressage with Contessa, Fedarman B, and Fernhill Prezley:

Your Advanced leaders at the Carolina International CCI and Horse Trial! Very pleased with Contessa, Bruno, and Prezley…

All eyes will now turn to the test Ian Stark has laid out for tomorrow. You can take a look at it in more detail in our preview, which includes the full virtual tour from CourseWalkApp. All FEI cross country will be streamed live on Horse & Country — click here to access the feed.

Division start times are as follows:

If you’ve missed out on any of our coverage from this weekend, click here to catch up. Go Eventing!

Many thanks to Mikaela Kantorowski and Brant Gamma Photography for the media support this weekend, all sponsored by Ride EquiSafe!