Bring on the ponies! There's something awesome about a child or fun-sized adult who gets to train and compete with a special pony. "Pony Power" celebrates riders and their pony partners of all ages and sizes who are bringing their A-game to the world of eventing. Do you know of a duo that you think would be great feature subjects? If so, email [email protected] 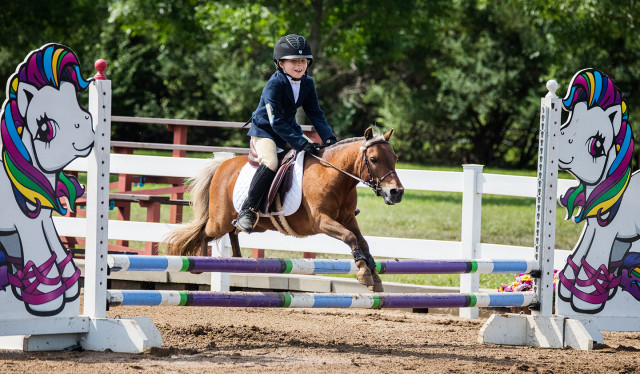 The iconic red barns at Magister Equitum Stables in Hector, Minnesota were teeming with horses and riders during the Roebke’s Run July Horse Trials. Horses of all shapes and sizes settled into their stalls for the weekends, reminding me of the amazing diversity in the eventing world. One equine in particular stood out from the rest, not because he was big or brightly colored, but because he could barely be seen over his stall door. 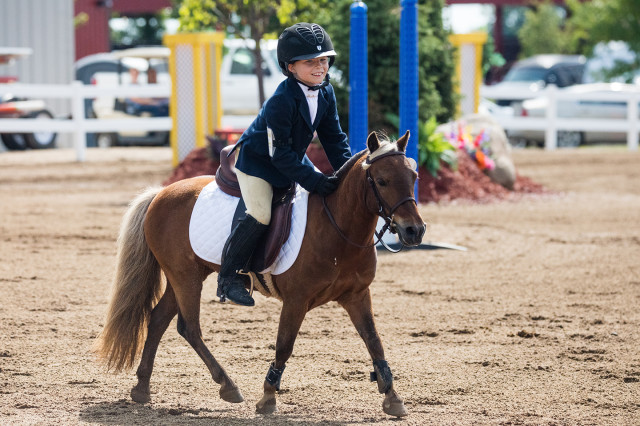 Hot Sauce and his owner, 8-year-old Ava Davis, competed in the Open Starter division at Roebke’s Run. Between Ava’s infectious smile and Hot Sauce’s tiny, fluffy frame, unsurprisingly the two of them gathered a huge crowd of fans over the weekend. Though he was easily the smallest pony entered in the show at 10.2 hands, Hot Sauce was a total hot shot and treated everyone to a great show of “can do” pony attitude.

Hot Sauce and Ava’s partnership began when he arrived at Pegasus Circle Farm in Mankato, Minnesota, where her mom and fellow eventer Amy Hannaman was leasing a 16-hand warmblood.

“He had been a pasture buddy for a family that was shifting to boarding their horses. At 15 years old, Hot Sauce had no formal training, and 8-year-old Ava had just started jumping, but the littlest kid and the littlest pony at the barn were drawn to each other,” Amy said.

“Ava was given permission to work with Hot Sauce, and they developed a special bond through countless hours together filled with bucks, nips and steady improvement.”

Hot Sauce’s owners later decided to move their horses to a different facility, and they asked if Amy like to buy him as a mount for Ava. Hot Sauce officially joined their family last September. 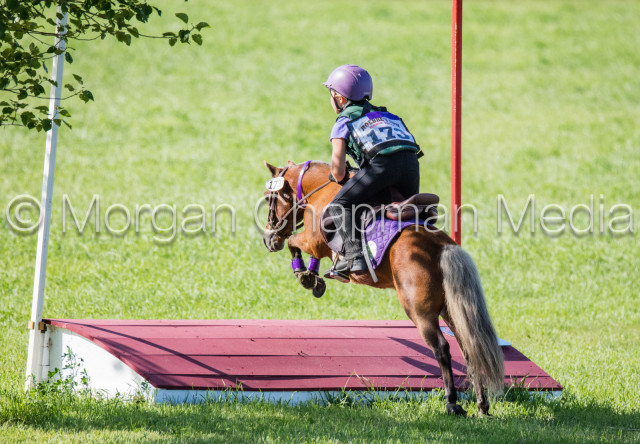 “By the end of that month, Ava and Hot Sauce were off to their first hunter schooling show, and we spent the summer and fall watching our barn family compete at horse trials around the midwest,” Amy said. “Ava knew this was what she wanted to do.”

Ava and Hot Sauce made their eventing debut at a Roebke’s Run schooling show earlier this summer, followed by the Roebke’s Run July Horse Trials. Their plan is to continue competing in local horse trials for the remainder of the season.

“Hot Sauce has gone from not having the muscle to canter a circle to cantering 20 meter circles in the dressage ring. We are so grateful that Kt saw the potential in this little team,” Amy said. “Ava and Hot Sauce are also active members in Lead Hound Pony Club, where they have had many additional opportunities to hone their eventing skills and meet other horse-crazy kids.”

Amy knows Ava will outgrow Hot Sauce at some point, but she emphasized that he will always have a forever home with their family.

“We hope Ava and Hot Sauce can get to a few shows in 2017, but we have had many tear-filled conversations on what Hot Sauce’s next job will be,” Amy said. “We hope we can hand him down to another small eventing rider, but he will always have a home on our farm pulling his pony cart in the summer and skijoring in the winter.”

Too darn cute for words. Photos courtesy of Amy Hannaman.

Check out this video of Ava and Hot Sauce in the Starter division at Roebke’s Run July Horse Trials: