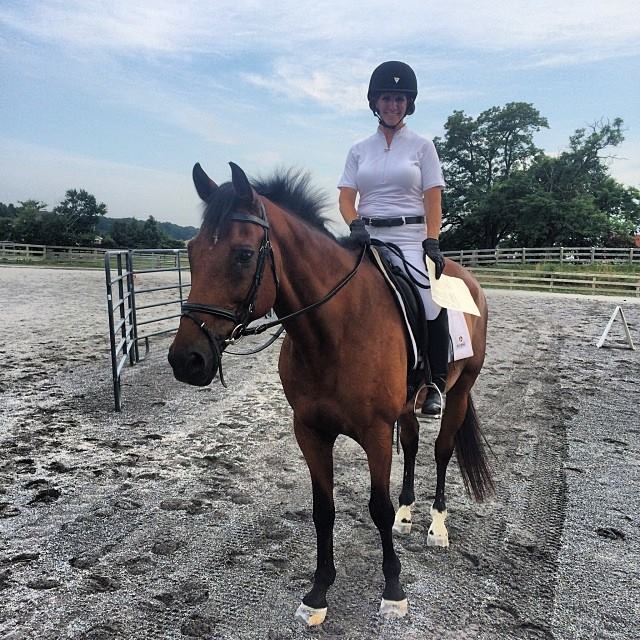 When Steph Rhodes-Bosch retired her 2010 WEG team silver medal partner Port Authority from upper-level eventing last year, she knew he wouldn’t be hanging up his horse shoes for good. While his lingering suspensory issues made galloping around an Advanced cross-country course a no go, 16-year-old Ollie proved to be very sound on the flat.

“When we started to bring him back into full flatwork at the beginning of this year, I started to question whether I had time to campaign him as a dressage horse,” Steph said. “Because of my eventing schedule for both myself and my students, aiming at Third and Fourth Level dressage shows wasn’t going to be realistic.”

In looking for a lease candidate, Steph met Margaret Nelson through a mutual friend. Margaret had been taking lessons at Waredaca in Laytonsville, Md., and was looking for a horse to build a partnership with in lower-level dressage. It turned out to be a perfect match, and Margaret has been taking two to four lessons a week on Ollie since January.

“Ollie is really quite special,” Steph said. “I don’t think many other four-star horses that ripped around in the fashion he ripped around would be so placid and able to handle the change of pace, but he’s been a perfect gentleman.”

After six months of solidifying their partnership, Margaret and Ollie went to their first schooling show at Waredaca on Tuesday, where they did a Beginner Novice dressage test. “I had no idea what his reaction to being at a show would be,” Steph said. “It had been about a year since he’d been out in public. He’s always level-headed at new places, but he knows when he’s out and about.

“He came off the trailer, took a look around and settled in. Margaret got on, and he marched straight over to warmup like he owned the place. They warmed up really well. He’s never been the easiest to ride in the dressage arena since he prefers to go around with his nose stuck out, so Margaret’s goal for the next test in a few weeks will be to maintain that roundness and impulsion they get in lessons.”

David O’Connor, who coached Steph and Ollie to their WEG team silver medal in 2010, just happened to be at Waredaca at the same time teaching an Expert Day clinic, so he stopped by to see the horse. “David has always been very fond of Ollie and vice versa,” Steph said. “He thought Ollie looked great; it’s nice to know he’s still very much loved and admired.”

Will Margaret come to the dark side and try a three-phase event next? It’s definitely a possibility, as Ollie’s suspensory didn’t hamper his jump schools last year before Steph opted to retire him. If Margaret does decide she wants to try jumping, Steph will ultrasound Ollie again and make the decision in conjunction with his vet, Dr. Christiana Ober of Peak Performance Equine Services.

“I think he would really enjoy jumping,” Steph said. “Margaret did a lesson a few weeks ago in a jump saddle, and we worked over trot and canter poles. He’s always obedient but not necessarily enthusiastic in his flatwork, but the second he saw the trot poles, his ears went forward and he was so happy. If we decide to go that route, I think it would make the horse very happy, and that’s what’s important.”

Though the decision to retire an upper-level partner is never easy, Steph is glad she made the decision when she did. “I would rather us pull the plug when we did rather then get the suspensory healthy and try again. We retired a sound horse who had no idea why we weren’t going to Richland last summer. He never had to go through a painful recovery, and I still have a horse in my barn who I love.”