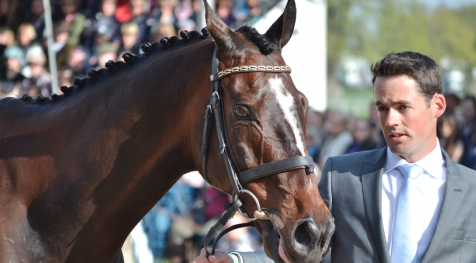 Equestrian Sports New Zealand has just posted a press release announcing a positive B sample result from Clifton Promise. Jock Paget faced a two-month suspension after the A sample tested positive for Reserpine, a tranquilizer on the FEI Prohibited Substance List, following the horse’s Burghley victory in September. While waiting for the results from the B sample, Jock has maintained his innocence, and Frances Stead of Clifton Eventers has stood by him. He will now present his case to the FEI Tribunal at a date not yet determined.

Equestrian Sports New Zealand (ESNZ) has received notification from the International Equestrian Federation (FEI) that the B blood sample taken from Clifton Promise at the Burghley International Horse Trials has tested positive for the banned substance Reserpine. Clifton Promise, owned by Frances Stead, was ridden to victory at the event by Jock Paget in early September.

Paget is now required to submit written documentation to the FEI explaining the presence of the banned substance in Clifton Promise’s bloodstream. He is confident of providing the FEI with a comprehensive explanation which will be considered at a hearing of the FEI Tribunal.

Paget says that while the B sample result is disappointing, it was expected given the blood in the B sample was taken at the same time as the A sample.

“ I will continue to work closely with my team to provide a full explanation to the FEI.”

ESNZ was notified of the positive test from the A sample on 14th October, and since then both the rider and horse have been provisionally suspended from FEI and national competitions. In keeping with ESNZ’s own Clean Sport policy and its full support of the FEI’s Clean Sport programme, Paget has been stood down from any official ESNZ activity while the legal process is underway.

“ESNZ is confident that he will provide a full and persuasive explanation to the FEI.”

“As stated previously, Clifton Eventers will not be making any separate statement other than to emphasise once again that all the relevant parties state categorically that none of them have taken any actions with the intent of administering any prohibited substance. We would also reiterate that Clifton Eventers are firm supporters of all policies that prevent the use of any substances that enhance the performance of any horse. We all want a clean sport and a level playing field for competition. It is the only fair way for the best combination to become the winners on the day.”

“Jock must now provide a plausible and satisfactory explanation to the FEI over the coming months as to why that banned system was in Clifton Promise’s blood,” Equestrian Sports New Zealand chief excutive Jim Ellis told TV ONE’s Breakfast.

Paget is confident of providing a comprehensive explanation which will be considered at a hearing.

The hearing could happen as late as February and March of next year giving Paget a significant time to build his case but no matter what the outcome, he will be stripped of his Burghley title.

“The Burghley title will be lost as a result of this,” Ellis said.

“The rule violation makes that automatic and clearly the FEI tribunal will consider a period of suspension and, taking into account the evidence and facts of the matter that Jock will put to them, and I really can’t pre-empt what that will be.”

As a result, fellow New Zealander Andrew Nicholson is now the winner of Burghley title finishing second in the prestigious event in September.

“I’m a good friend of Jock’s and I’m a great admirer of his riding abilities and what he does,” Nicholson told Breakfast.