EN TRENDS:
The Fork Results, USEA Recap
–I stayed through all of the CIC3* and advanced rides (over 80 horses) to watch all the Rolex entrants showjump, but, as a result, exhaustion has finally set in after 4 days at The Fork, so there may be a lot of typos typos. 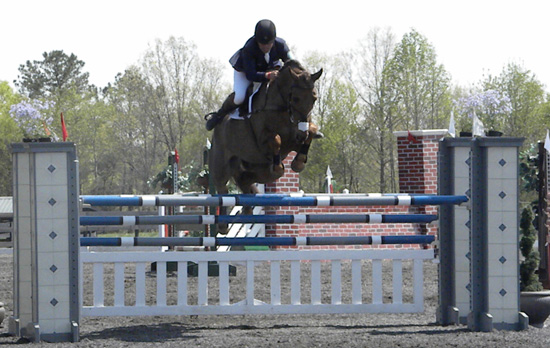 Buck and Bobby FTW!!
(1) My Boy Bobby and Buck jumped a beautiful show jumping round that jumped them into the CIC3* victory after overnight leaders Allison and Arthur pulled a rail.  Bobby looked mature and super athletic, and Buck rode him to perfection.  The victory is a repeat from last year where the pair also won the CIC3* at The Fork.  Buck wore an Orange and Blue helmet cover on Saturday to honor his late grandmother, and today’s win was a great way to end what must have been an emotional weekend for Buck.  Buck doesn’t spend a lot of time blogging or promoting himself to the fans; he just quietly works hard and delivers in the clutch.  It’s great to see his momentum from ’09 carrying into this spring, and we’re looking for a big year from Buck.
(2) So, do you remember last year from our Fair Hill coverage when I told everyone  to expect more great things from Hannah Burnett and Nike?  Hannah and Nike (St. Barths) took the next step in that direction by jumping from 4th to 1st in the advanced division on a beautiful clear show jumping performance.  I’ll let Hannah tell us more about her fantastic weekend in her EN blog entry early this week, but consider that she and Nike beat 3 previous Rolex top-10 finishers, one A-lister, three B-listers, and countless Rolex entrants.  Definitely a solid weekend for Hannah and Nike. 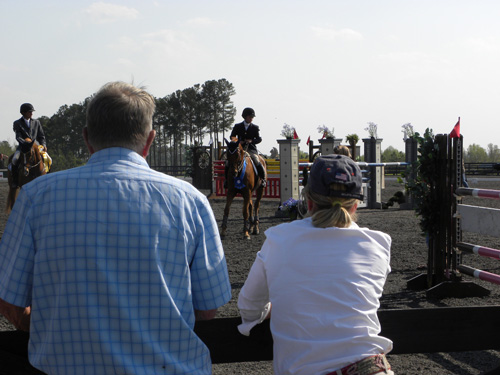 Mr. Thompson (Nike’s owner) and Karen enjoying the awards ceremony
(3) Maybe the biggest news is that Will Coleman fell from his prelim horse War End on XC today at a downhill house jump approaching the prelim water.  Will was taken to the hospital and someone close to the situation confirmed that he broke his collar bone.  Collar bone fractures typically take 4-6 weeks to heal and riding with a broken collar bone is pretty much impossible.  I know of one rider who was back riding two weeks after breaking their clavicle, but the injury almost certainly ends Will’s hopes of riding Twizzel at Rolex.  Will is on the A-list, and was certainly a frontrunner for making the WEG squad, but that journey became much more uncertain this afternoon.  This is pure speculation, but a late spring CCI3* or perhaps Luhmuhlen CCI4* this summer would probably put Will and Twizzel back into  the mix for making the team even if they miss Rolex.
As an aside, it seems like a lot of pros have been having issues with prelim horses this year. Jan and Karen both had their bad falls at Pine Top in the prelim, and now Will.  There are manny different possible explanations for why this might be, but it’s just a topic for discussion.
(4) Phillip finished 3 horses in the top 6 of the CIC3*, and 2 in the top 12 of the advanced.  Waterfront had a tough two rails to drop out of the lead in the advanced, but Connaught jumped like a sick twisted freak (for our many readers over the age of 25, that’s a strong compliment), TruLuck jumped clean, and Woodburn had a rail but looked good.  I have said it before, but it’s getting more true every weekend: Phillip has the strongest fleet of horses I have ever seen from a US rider (even excluding Inmidair and Waterfront), and it’s probably the strongest in the World right now. 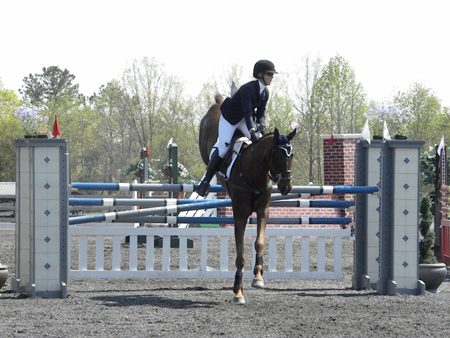 It’s a game of inches.  But, Allison and Arthur had a great weekend to set them up for KY.
(5) Speaking of Will and Pawlow, they continued to impress me as a pair to watch this spring.    Pawlow can flat out jump.  He smoked around the XC just one second over the time and had the cleanest, best looking show jumping round of the day.  Pawlow fits Will’s style of riding almost perfectly.
(6) For the Canadians, Steph Rhodes-Bosch continued her strong spring, finishing 8th in the CIC3* and adding just 0.4 penalties in both jumping phases for the weekend, which tied Will and Pawlow for the lowest Saturday and Sunday total in either the advanced or CIC3* divisions.  Selena O’Hanlon also had a great weekend with Colombo and finished just behind Steph.   Ian Roberts did a good job protecting his strong dressage score to finish in 8th in the advanced, eh?
(6) In a strange moment during the show jumping, plumes of black smoke came billowing out of a field just a few hundred meters from the show jumping arena.  Brian quickly announced that it was a controlled burn done for land preservation on The Fork property and that everything was under control, but it’s strange that they decided to start a prairie fire during a horse trials. 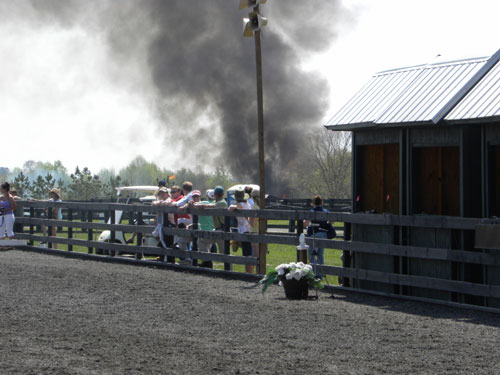 does this mean we have to move our golf carts?
(7) A few notes that are too short for their own number include that Laine Ashker looked strong all weekend on Anthony Patch, Mensa is a XC machine, Titanium has an irregular jumping style but only dropped one rail, Draco went off course and jumped backwards through the triple and took out the middle oxer before stopping, Last Monarch was very energetic (understatement) but Holly guided him around beautifully for a clean SJ, 8 nations were represented at The Fork this weekend, and Peter Atkins looked polished and professional all weekend.
—
Notes from the COTH recap:
-Buck says: “Gran will be happy with that.”
-*Buck doesn’t plan on taking Bobby to Rolex.
-Allison was pleased with the weekend overall.
0 0 votes
Article Rating
Subscribe
Login
Please login to comment
0 Comments
Inline Feedbacks
View all comments
More Insanity on Horse Nation >>