EN TRENDS:
Update: Before we get to the CCI3* results, we have some good news from Fair Hill.  I have just received official word that Jennifer Simmons has been released from the hospital.  It is a tremendous relief that Jennifer seems to be fine.  All of Eventing Nation wishes Jennifer a swift and speedy return to eventing. 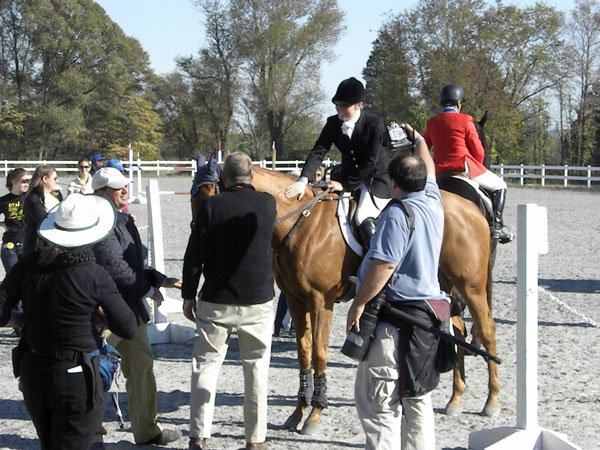 David, Dick Thompson, and a paparazzi congratulate Hannah
EN favorites Hannah Burnett and St. Barths won Fair Hill for the second straight year.  Hannah and “Nike” won the CCI2* last year for Nike’s owner, Dick Thompson, and this year they stepped up to win the CCI3*.  Hannah was one of only two riders to finish the weekend on her dressage score and she won the event by 8 points.  During the award anouncements, Brian said “see you at Rolex next year Hannah” and I think Brian is likely right.  Either way, Fair Hill could not have a classier or more deserving champion.
Link: Full Fair Hill results

(1) Phillip had a great weekend with Fernhill Eagle.  This horse competed in his first CCI3* this weekend and with a second place finish and just one rail added to his dressage score it looks like we can add yet another horse to the impressive Dutton advanced arsenal.
(2) At 15 years old, Cavaldi was one of the most experienced horses in the CCI3* field and the experience showed with his double-clear.  Kristin moved up in each phase with Cavaldi and shows that she has another very nice horse in her stable by placing 12th in the CCI3* with Castle Jordan.
(3) Kilrodan Abbott might be the best adult amateur horse on the planet.  Peter gives him a great ride, but Kilrodan Abbott has gone above and beyond expectations with a top five placing at Bromont and now Fair Hill.  I am absolutely enchanted by “Eddy” and Peter has to be so excited for the spring.
(4) Speaking of the spring, we could easily see the entire top 7 at Fair Hill targeting Rolex.
(5) Fifth placed Wonderful Will answered a lot of questions this weekend with a great performance.  Will had tough weekends at both Luhmuhlen and Burghley earlier this year, but his luck changed and he had a great performance at Fair Hill.
(6) Nate had five rails, but he will work really hard this winter to fix the show jumping.  Nate and Roly had a good round using the ‘bicycle grip’ at the AECs, but Nate went back to a traditional grip for today’s ride.
(7) There were only 4 double-clears in the CCI3* show jumping.  The show jumping time was tight and some of the rails were pulled because the riders were cutting the turns a bit.  Most of the horses looked to have recovered from the cross-country well, although Nate’s horse did look a bit tired.
(8) Thanks to Fair Hill and all of the volunteers for a fantastic weekend.  I am headed to get some food and then make the drive home.  As an aside, I was too busy rooting for Hannah to video her ride, but I did get video of the US team racing shetland ponies.  We will post that video and much more from Fair Hill later.
Fear not video lovers, Buzzterbrown has us covered on the video front with XC highlights!
Go eventing.