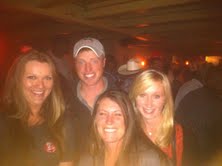 EN’s Ali Smallpage, Jaclyn Burke, Doug Payne and myself.
A little blurry, but yes, this is the one and only Doug Payne. Wearing a highly sought after EN HAT. We found Doug (and girlfriend Jess Hampf), who is in town for a wedding, at a bar in downtown Charlottesville. I would like to say it was the EN hat I spotted that led to me to Doug. But, in fact, it was the other way around. Anyway, it was a fun Halloween night out (that none of us were dressed for). The only person missing (because he went home early) was our Dearest John.
For those of you who have spent hours shoveling snow to get to ESDCTA’s horse trials today, you should stop! Due to NJ being in a state of emergency, from all of the snow, the horse trial for today (SUNDAY) has been cancelled.
Holly Hill (LA) — [Website]
Chattahoochee Hills (GA) — [Live Scores, Ride Times]
The Virginia HT — [Website]
Briar Fox Fall HT (KS) — [Website]
ESDCTA New Jersey HT — [Times/Scores]
Kristin Schmolze is California bound
The Adventures of Jack and Jill
More USA gold at Pan Ams
Buck still in charge at Chatt Hills
Helmet cam alert
Hope everyone has had a wonderful weekend. Stay warm! Winter is officially on the way! Go eventing.