On Wednesday morning, we linked to an article in the Horse and Hound announcing Great Britain is unlikely to send a full Driving team to the WEG in Kentucky due to the high cost of transporting the horses and equipment.  Competitors are permitted to raise their own funds for the trip, and Great Britain will be sending full teams to the WEG in all other disciplines.

Combined Driving
When I was young and ambitious, I might have “trained” a Percheron filly to move forward with a lunge line looped through her bridle and me walking aimlessly behind her.  Besides that and a carriage ride at the prestigious Peach Park in Clanton, AL, I know next to nothing about Driving.  But after a little reading and photo flipping, this sport looks awesome!  Combined Driving mixes elegance, toughness, and a little dash of crazy.  My kind of sport.
The CDE has 3 phases: Driven Dressage, Cross-Country Marathon, and Cones.  Major events are held over three days, and the winner is the competitor who accumulates the fewest penalty points by the end of the show… I know, it sounds familiar, doesn’t it?
Dressage
During the Dressage phase, drivers must complete a test and are judged on each movement on a 10 point scale.  Drivers receive collective marks for paces, impulsion, obedience and lightness, driver and presentation.  Check out these FEI Driving tests which include movements like shoulder-in, collected and extended trots, and circles with reins in one hand. 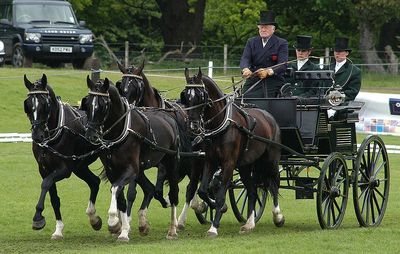 George Bowman (GBR) during the Dressage phase of the Hopetoun National Horse Driving Trials (Edinburgh, Scotland) in May 2005  (Wikimedia Commons)
Cross-Country Marathon
The Cross-Country Marathon requires drivers to navigate their teams through a series of obstacles and hazards over several miles of course within minimum/maximum time limits.  Cross country penalties range from error of course to putting down the whip to turning the vehicle over.  If I had tickets to this show, I’d go straight to the water obstacle.
Cones
The Cone competition tests the accuracy of drivers and teams as they navigate through marked “gates” made of cones with balls balanced on the top.  Penalties are incurred if the ball is knocked off a cone or the team does not finish within the time allowed.
Grooms
Eventers must leave their dedicated grooms at the start box during competition, but Combined Drivers are permitted to bring a “groom” or navigator on course with them in all three phases.  During Dressage and Cones, the groom is not allowed to speak to the driver.  On Cross-Country, grooms keep track of time, direct the driver, and act as a vital counterweight around tight turns and on uneven ground.
Driving at the WEG
The United States and Great Britain finished in 8th and 9th place respectively at the 2006 WEG team Driving competition.  As a new found fan of our sister sport on wheels, I’m kind of bummed out Great Britain doesn’t plan to send a full driving team as the country always proves to be formidable opponents.
It is estimated to will cost Â£1.25-Â£1.5 million to send teams for all eight disciplines representing Great Britain.  Olympic and Paralympic disciplines are lottery funded, but non-Olympic disciplines (Driving, Endurance, Reining, and Vaulting) must provide the majority of funding themselves.  An online auction on the Team GBR website is dedicated to funding the country’s trip to the WEG.  The goal of Â£500,000 has not yet been reached.
The WEG Driving Championships will be held Thursday, Oct. 7- Sunday, Oct. 10.  Purchase your tickets here!
Watch highlights from the USEF National Combined Driving Championship and see the similarities between Eventers and their friends in the Driver’s seat!
0 0 votes
Article Rating
Subscribe
Login
Please login to comment
0 Comments
Inline Feedbacks
View all comments
More Insanity on Horse Nation >>