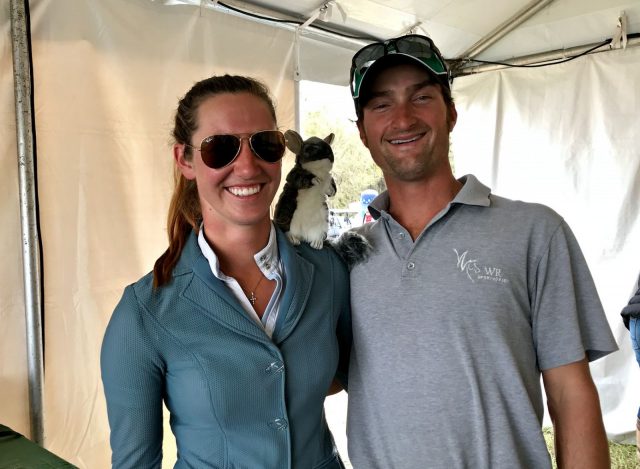 Waylon Roberts and Jenny Caras have been an item for about four years now, and it’s pretty stinking cute. In the media tent they got into a little lover’s quarrel about whether or not it’s weird to put sugar in spaghetti sauce (Waylon says yes; Jenny says no) and on the inside I was like, “just stop, I can’t even.” They’re forever posting adorkable Facebook pictures of themselves holding hands in front of waterfalls, being holiday-spirited at ugly Christmas sweater parties, and of course doing horsey stuff together.

And now they can add a new selfie to the collection, of themselves holding up matching shiny blue ribbons at the 2018 Red Hills International Horse Trials. Waylon bested the Advanced with Kelecyn Cognac, having led the division from wire to wire; Jenny ticked the box of her first FEI win with Fernhill Full Throttle in the CIC2*. 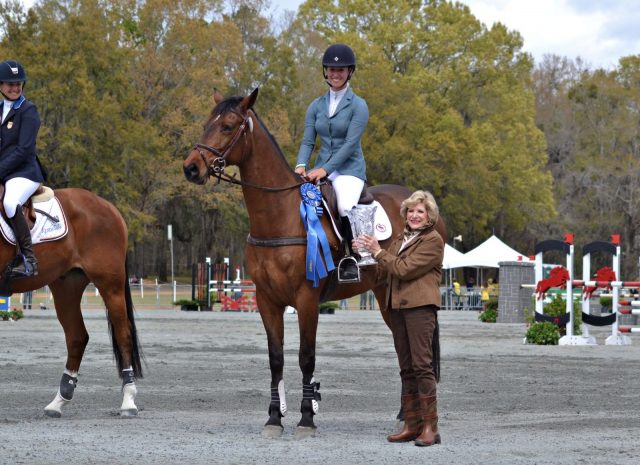 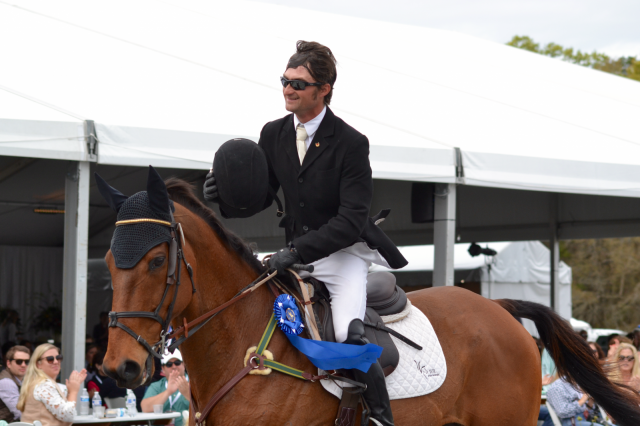 To be fair, I’m sure #Jenlonlife isn’t all rose petals and heart emoji. Being a twentysomething horse professional is tough, staying on your game is exhausting, and there are as many lows as there are highs. Jenny and Waylon are lucky to have one another as partners, for support in and out of the saddle.

“It’s so fun because we bounce ideas off each other,” Jenny says. “And I never feel like he’s just telling me what I want to hear with the horses. He’s going to be real, and that’s really important. We’ve been together long enough the gloves are off.”

“I’m a little frightened of her sometimes!” Waylon laughs.

They’re based with Phillip Dutton in Aiken and Chester County, Pennsylvania, and while they’ve got separate barns now they are working toward a more integrated program in the future. They’ve been toying with the idea of reorganizing their operations to put the upper-level horses in one barn and client and sale horses in another, and are working to get their staffing situation wrangled. PSA to ambitious young riders, they’re in the market for working students!

Waylon and Jenny say they get more nervous for one another at events than they do for themselves — “I’m a wreck!” Waylon says — but that they can be competitive toward one another, too. “I’m super competitive against Jenny, but we’re just pushing each other to get better,” he explains. 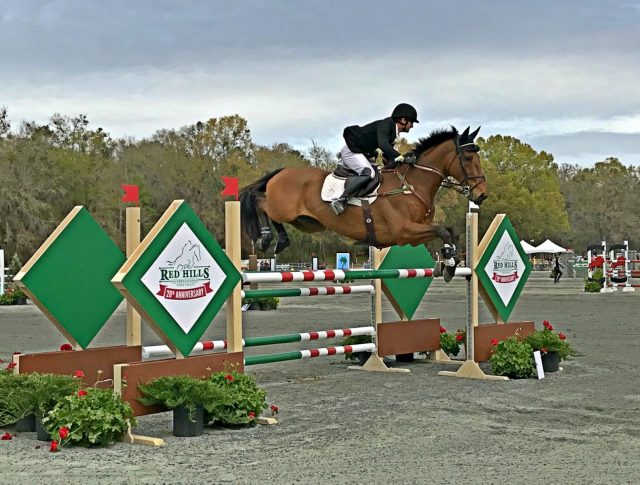 Their hard work paid off with twin wins at Red Hills. Chris Barnard’s course was open and galloping, so kicking on without compromising balance and rideability was the name of the game. “We’ve ridden a few Chris Barnard courses this year, and every one has been tight on the time,” Waylon says. “You have to keep moving, but it’s a risk that you take. He is a master at making you stay careful but keeping the class interesting.”

Waylon had a rail in hand and used it, picking up a time penalty as well, but he said “Dan” was super overall. The horse has struggled with show jumping in the past, first with Kevin McNab, who competed him through the three-star level, and then with Heidi White. Waylon has had the 15-year-old Australian Thoroughbred, owned by Anthony Connolly and L. Skye Levely, for four years, and has been working with Richard Picken to sharpen him up in the show jumping phase.

“He wants to be careful, he’s just not the most orthodox of horses,” Waylon explains. “He’s a big horse and he’s a sensitive horse — he’s got a Thoroughbred mind on him. He remembers everything, and he takes everything very personally so you’ve got to work it through with him. But he keeps getting better. He’s 15 now but he keeps getting better so I’m really excited about him. [Richard] has been super and he knows the horse really well now.”

Next up for the pair is the Carolina CIC3* and then, fingers crossed, Kentucky. Best of luck, Waylon and Dan! 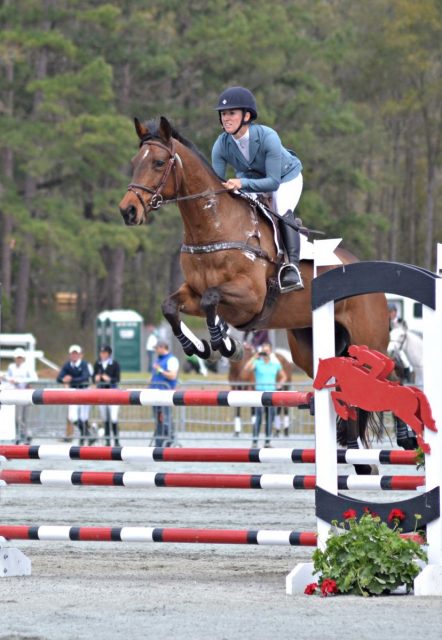 Jenny and “Pongo” were in third heading into CIC2* show jumping, turned in a double clear round, and rose to first when leader Caroline Martin and The Apprentice felled a couple rails and dropped to fourth. Jenny has had “Pongo,” a 9-year-old Irish Sport Horse gelding (Cyrano—Euro Glory, Euro Clover), for three years, and they’ve been on the doorstep of an FEI win for some time now.

“The win means a lot to me,” Jenny says. “I’ve never won an FEI class, so I’m really happy. He’s kind of been knocking on the door last fall at a few events, so for it to come through, it feels great. He’s so consistent.”

“He jumped great. I don’t think he touched a rail. He’s a really good show jumper naturally. For some reason I was more nervous today than usual. He let me make a couple of mistakes, and he forgave me for them, so I was really happy with that.”

Pongo looks like a fun ride — he’s on the smaller side and has a sporty little way of going, and Jenny has done a great job of figuring out his buttons and quirks.

“He’s a very careful horse, but when I got him he was very stiff,” Jenny says. “I think he didn’t have the best life before [Carol Gee, of Fernhill Sporthorses] got him. She bought him off somebody who maybe had a bit of a hard time. He seemed like he was a little roughed up. He’s really grumpy in his stall and pins his ears and bites and kicks the wall. Everybody that comes in the barn doesn’t want to be around him, but he’s the sweetest horse. He would never do anything. You walk in there and give him a scratch, and he’s like your best friend. Because he’s so sensitive like that it took me a long time to build a partnership with him.”

“He’s been a little tricky because he’s quite careful, so it’s taken me a bit of time to figure him out,” Jenny says. “Now we have a pretty good partnership going. Last year was his first year at Intermediate, then he finished off the season great. He likes to win I think. He tries his heart out — I’m just along for the ride!” 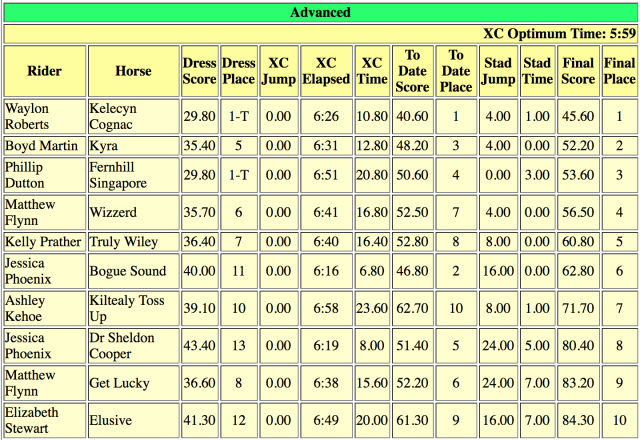 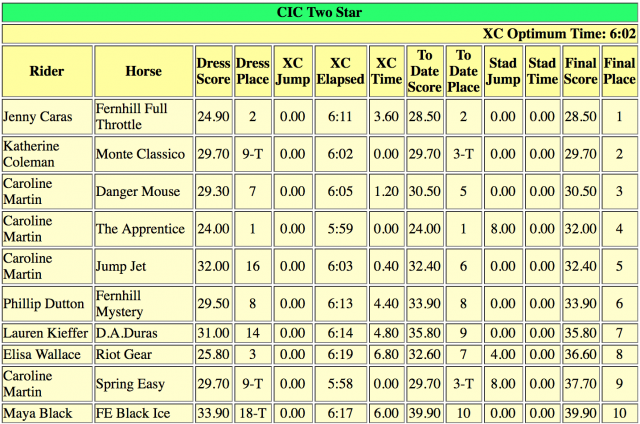 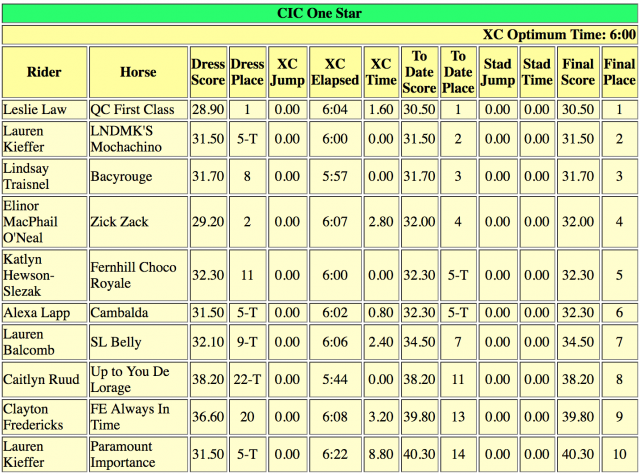