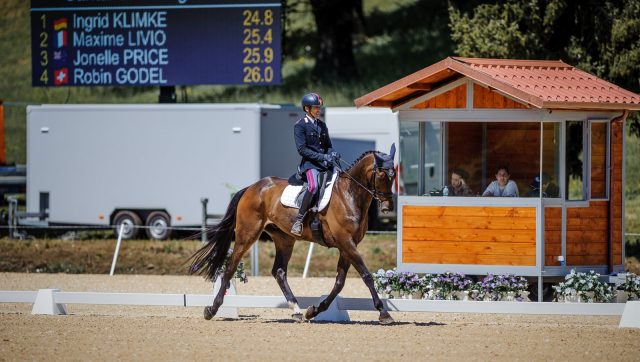 Italy’s Marco Cappai produces his test in front of the ground jury. Photo by Tilly Berendt.

One of the curiosities of this week’s test event at Pratoni is its ground jury appointments: though almost all the officials who’ll run the show when the World Championships rolls around in September are the being put through their paces this week, the ground jury for this test event will differ from the final line-up come WEG week. This is down to a procedural change that was enacted during last year’s Olympic cycle — now, the announced trio can’t be employed in full at an event in the lead-up to the championship.

But there is one man who will cross over between the two events: Canada’s Peter Gray, who helms this week’s team as president of the ground jury. This weekend, he’s joined by Mariana Sciocchetti Campello (ITA) as well as Laure Eslan (FRA). In September, we’ll see him return as a member of the ground jury once again, where he’ll be joined by president Christina Klingspor (SWE) and fellow member Christian Steiner (AUT). EN caught up with him to find out what his role as a ground jury member comprises, how he’s contributing to the development of this year’s World Championships, and what we might expect in September.

This is a return visit to Pratoni for Peter, who was part of the FEI Risk Management Committee years previously — a key milestone in one of his many roles in eventing, which has included acting as Canada’s National Safety Officer. Now, three years after earning his five-star judging licence, he returns in a different role, but one that arguably has just as much influence on the shape the final competition takes. The honour of being selected from the large list of qualified ground jury members certainly isn’t lost on him.

“I come to the role in a unique situation, in that I was an international competitor first, and then I became and international coach and trainer, and now I’m an international dressage rider — so that keeps me sharp for this phase,” Peter explains. “But I’ve also been on organising committees for competitions, so I kind of tick a lot of boxes, but I wonder how I got selected! I’m one of 150 who could be chosen, so I’m very honoured and very excited to be here.”

There’s no nomination process for being selected to judge at a championship — rather, it’s a call-up, as Peter explains: “They look at your track record, and probably ask around and check results from where you’ve been judging, and make sure you know what you’re doing. Every three or four years you’re meant to do a course, and when I was promoted to the five-star three years ago, at that time they said I was the sort of person they want to promote — I don’t know what they say, but I was happy to fit that, and here I am!” 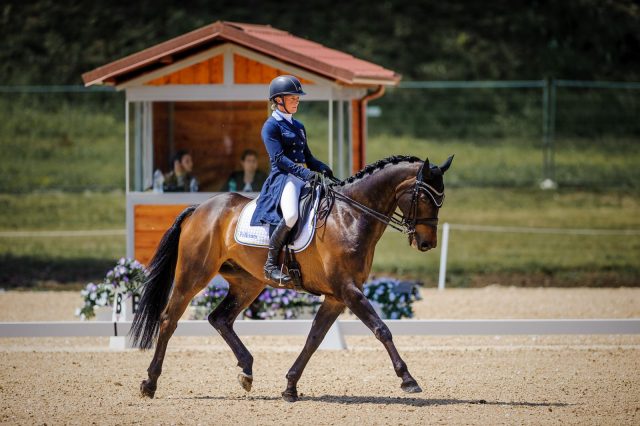 The role of the ground jury is vast: not only are they the judges for the first phase, they also have the final call on whether horses are accepted into the competition and passed into the final phase, and they have to sign off the cross-country course as fit for purpose, too — though this part, Peter explains, has become less pressurised as the standard of design has continued on an upswing, replete with continued improvements where safety measures are concerned.

“In the past, the role of ground jury was more important for walking the cross country, because it has to be approved by us and we have to, as horsemen, give our stamp of approval of whether the course designer has been fair with the questions he’s asked or if he’s overdone anything,” says Peter. “Sometimes it’s a good check for the course designers, but with the top ones — and we have one of the top ones here — it’s just a formality. They do such a great job.”

Arguably the most intense part of the job is judging the dressage phase, particularly as the standard of performances in this phase continues to rise at a remarkable rate. For Peter, it’s crucial to engage in ‘blind’ judging — disregarding the renown of the rider in front of him and focusing instead on what they present on the day. Because he doesn’t judge in Europe as often as many other ground jury representatives, he’s able to make the best use of a degree of separation from those riders who put in world-beating performances day in and day out — and from those who are just starting to put their names on the map.

“I think I may have raised a few eyebrows yesterday because I judged what I saw,” he explains. “I’m not influenced by their results, or what they’ve done in the past. I don’t judge them a lot, and I think that’s a good thing because I can try to judge what I see with fresh eyes every time.”

It’s just as important to Peter to judge a rider such as Ingrid Klimke with the same exact parameters as one of the younger, less well-known riders he’s seen in the dressage ring this week, because even the slightest bias or lapse in concentration can make an enormous impact on the final results.

“Every phase is so influential now, and the dressage is no longer as influential as it perhaps has been, but these days everything is so competitive — a flying change in the first phase or a time penalty in showjumping can make the difference between winning and losing. I would say I’m one of those people who takes my judging as a real challenge; every time I’m in the box I’m trying to do the very best I can for every rider that comes down the centerline — this morning, I said to my scribe, ‘this could be the winner’, and I was just thinking out loud, but every time someone comes down, I’ve got to be ready in case it is.”

Though he’ll return in September as a member of the ground jury, this week we’re seeing him sitting at C as the president — but what, if anything, is the difference between the roles?

“Well, you have to really remember your test, because you’re the one to ring the bell if they go wrong,” he says with a laugh. “So you have to pay attention. But honestly, it’s really the captain of the team — it’s not a person who has more influence than the others, because we all act as a team, even though the president does have the deciding vote on anything, be it course approval, horses in the horse inspection, and so on. That all ultimately comes down to the presidential vote.” 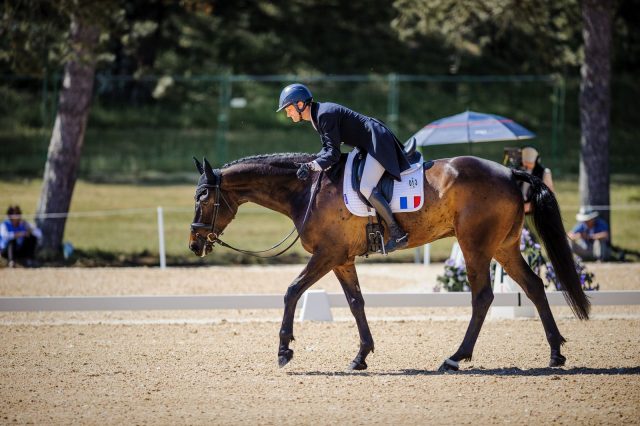 France’s Nicolas Touzaint, who became the European champion at Pratoni in 2007, returns with Absolute Gold HDC. Photo by Tilly Berendt.

Because of the collaborative nature of the role, Peter has sought out opportunities to touch base with his September cohorts.

“I’ve worked with Kiki [Christina Klingspor, president of September’s ground jury] quite a bit in America, and I introduced myself to Christian Steiner, who was in Kentucky at the five-star. I was president of the four-star, so we had dinner. It’s nice to have met him and formed that working relationship,” he says. He’ll get another chance to work with Kiki prior to the World Championships: the pair will both be in situ on the ground jury at Aachen in July, which will act as an important selection trial for many federations. Because of his unique crossover between the test event and the World Championships, though, he’s a major conduit for feedback that will help make this September’s competition the best it possibly can be: “Certainly, it’s all very much in my mind about what’s going to happen in September, and I’m making notes on small things that could be improved, but the list really is small. It’s just hard to imagine how the infrastructure will expand as we go to many more horses and many more people — it’ll be five times as big.”

So far, though, so good: Peter is full of praise for Pratoni as a venue, a common feeling in the ranks on site here in Italy.

“Certainly I’m appreciating the integral parts of the competition that the horses are going through, and I think one thing that stands out is for horses and owners and riders, it’s a very friendly place to be. I think the horses have a really nice feel here; they all seem to be in a good place to be mentally — and how could they not? It seems like a very peaceful part of the world,” he says. “I’m particularly impressed with the course designer, Giuseppe della Chiesa. I haven’t seen any of his courses before, but he’s used the long routes in a very horse-friendly way. Instead of spinning them around in circles and making the long route actually exhausting for a potentially tired horse, he’s done a really good job of making them time-consuming but keeping a lovely flow and making it a very positive experience for the horses. I’m very impressed with that. For those that think it might have a little bit of a straightforward look, I think the terrain at the beginning and some of the questions have challenges that aren’t apparent right away. I think he’s got it bang on, I really do.”

Though this week’s competition is held at CCI4*-S, and thus employs a shorter route than September’s long-format Championships, it’s also a great opportunity for everyone on site to familiarise themselves with Pratoni’s uniquely rolling hills, which create a terrain and stamina challenge that’s above and beyond most events on the FEI calendar.

“I suspect the hills are going to be a real factor come September, though that may not be so apparent this weekend,” says Peter. “I think where some of the more warmblood horses will get away with it this weekend, come September, you’ll want to have your galloper with good endurance. I think also, related to that, something that won’t be completely fatigued on the final day for the jumping. You need a horse that can make the time but still come out fresh the next day. It’ll be a challenge for the selection.”

But while descriptions of the hills and reports of long patches of prolonged sunshine might make Pratoni sound like an event that’ll be hard on horses, it’s also blessed by its location: the ground here remains consistent regardless of how dry or wet the weather is, because it’s composed of volcanic sand – and on a molecular level, it doesn’t clump, become boggy, or harden. The footing feels surprisingly springy underfoot, though Peter puts this better than we can.

“Let me give you a word to describe the ground here: it’s like a magic carpet,” he says with a smile. Roll on Pratoni 2.0, then.