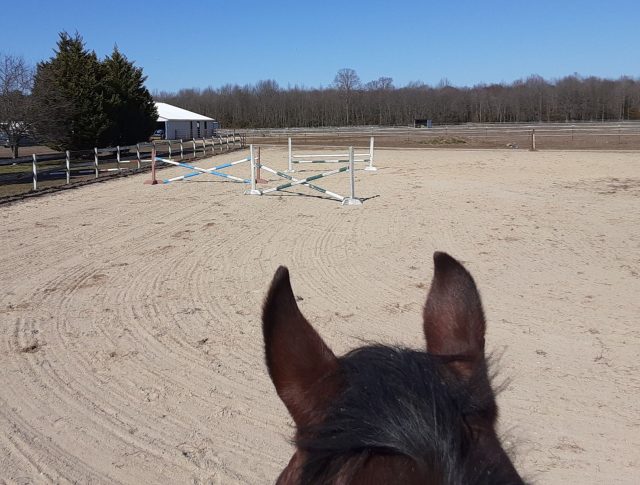 It’s harder than it looks. Photo by Holly Covey

Prix Caprilli. (Pronounced “pre-cah-prilly.” It’s a dressage test that uses jumps. No, I am not kidding, and it’s WAY harder than you think it is!)

A local schooling show offers Prix Caprilli dressage tests and had the link to the tests online, so being the out-of-control clicker that I am, of course I downloaded and read them. And that led to bit of research, and even more links to tests and the history of dressage, and of riding over jumps … and you get the picture, so to make a long story short, I ended up out in my arena with three poles and a diagram. Here’s the gist of it:

Prix Caprilli essentially is dressage with some jumps added as a more complete test of training. The jumps are low, and there are only two or three in the tests I’ve found. The regular transitions, gaits, circles and changes of direction are called for with the addition of either trotting or cantering (as you go up the levels) over the placed jumps. Refusals are scored as errors. There can be two or three simple verticals — cavaletti can be used — or one oxer and two verticals. In all they are quite low, 2 ft. 6 in. being about the highest height I’d set for schooling. These are simple but they are training exercises that will blow you away especially on your older horses that know it all. Hahum. Let me explain.

The three-jump pattern in the Prix Caprilli tests. Photo by Holly Covey

When I read through the tests, I thought, this is a fun set of exercises that I can set up at home in the dry spots in my ring. It looked like something far less boring than plain flat dressage, but doesn’t require a lot of jumps for gymnastics or other fancy exercises that, let’s face it, you just don’t have enough time (or light) after work to mess with. It also works well if you have to share a ring with flat riders as there are only three obstacles and they can be set so they don’t interfere with 20-meter circles, etc. So I made a copy, tucked in my barn coat pocket, and went out to the ring and set a few up.

Like straightness. Impulsion. Bending. Obedience to half-halt. And MUCH more! I was shocked at how badly I actually managed the Prix Caprilli test the first time I attempted to ride just the first half of the Training Level test. (See the crooked line below.) OK. So I’m a dummy. It got my attention, and I went back to work.

Straightness is the centering mantra of just about any dressage instructor and Prix Caprilli will bring that. All of the long lines, the center and quarter lines plus the long trot or canter on the diagonal to the single jump works on that skill. Need balance in your corners? Jumping and then immediately having to land, then turn, then transition to canter will work on that. Need to polish half halts, work on creating impulsion, bend, balance? Prix Caprilli tests work on all of that and also make you switch your balance too from jumping to flat and back again very quickly within the test. It was an eye-opener for me. 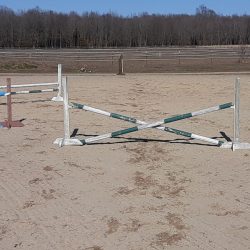 Look at this crooked track! Prix Caprilli tests are a good test of straightness. Photo by Holly Covey

As for the history of where this came from, the Prix Caprilli tests appeared evidently sometime in the ’50s or ’60s. While they may have developed in the early days of dressage, the savior of the Prix Caprilli tests was probably Pony Club. I am sure they were embraced for kids on ponies who liked the jumping but where pretty “meh” about the dressage, and disguised as yet another instance of the brilliance of a classical Pony Club education, as they give you a real feel for the essential training of dressage for jumping.

They were named in honor of Captain Federico Caprilli, the great Italian cavalry officer who studied horses free-jumping and developed the forward seat style of riding, a revolutionary theory at his time before the turn of the 20th century. (See Jim Wofford’s in-depth study of the genius of Caprilli published in Practical Horseman here.)

The tests I’ve found are set at Introductory Level, Training Level and First Level. They look as though they’ve been passed down secretively from one group to another, copied in the dark of night and posted under cover. If you go to the USDF, the USEF, or US Pony Club website, I’ll save you the bother of searching — they don’t have them. BUT I have found them online in various underground spots all over the world. Australia. Canada. Great Britain. Texas. California. Pennsylvania.

Rumor has it Lendon Gray’s Youth Dressage Festival can be credited with single-handedly saving Prix Caprilli for us in America, by writing and updating the tests and offering them in her highly regarded competition annually held in New York. Here’s the page. And she includes some judging directions, too.

I’ve linked a few tests here for your own special torture, and after a bit of experimenting, a more detailed jump set up. Bear in mind these are set for a 20m x 60m dressage arena.

I found thatj #3 was the one you can make into your oxer (should be square to be approached in both directions) and it should be set so that it is about 1 meter off the rail, to allow you to pass B comfortably without squeezing — this will not really make it centered on the quarter line but in the general area of it. It should not block the cross-center line from B to E, either, so should be set at least a meter up or down from the cross-center line. It has to be over fairly snugly so you can set the diagonal jumps and not block your line and give you the room to get to X for a 20m stretchy circle.

Jumps #1 and #2 are set on the diagonal, as the diagram indicates. You really want these in the second half (after X) of the long diagonal, but set so that they are in the no-man’s land between the quarter line and center line, so they don’t interfere with the line to jump #3. (See the video below). Walk your diagonal line carrying the pole, then drop it so it is square with your path from H to F/F to H, or K to M/M to K. Also, I used single schooling standards rather than wing standards which take up a bit more room.

Have you ever seen a Prix Caprilli test ridden?

Ride a test and let us know what you think! Prix Caprilli fans may have been driven underground, but as a recent convert, I can tell you that we’re still alive and kicking. Join the revolution! Ha! I’m only 75 years late!