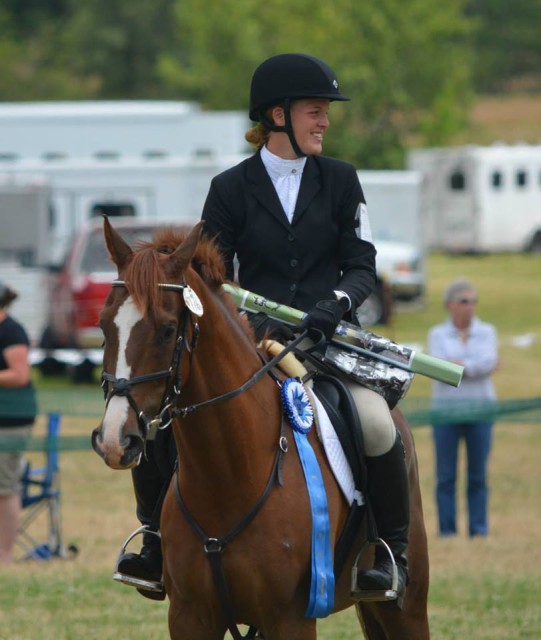 Madison Langerak met Matt Brown for the first time in December at the USEA Annual Meeting & Convention, where she received one of the coveted Triple Crown PRO Jr/YR Scholarships. The scholarship provides the opportunity to train for a week with a top rider, and in Madison’s case, Matt has kindly volunteered to serve as her interim coach later this month.

The scholarship is offered to junior and young riders each year who have success at the Training level, with the intent of helping them with the financial burden of training and educating them as hopeful future stars of the sport.

By competing at designated events throughout the year, riders have their scores ranked, with the two top riders from the East and West coasts receiving the scholarships at the end of the year.

Unbeknownst to Madison, her mother had signed her up for consideration for the scholarship program, and selectors had their eye on her as she competed throughout the season. “It’s probably better that I didn’t know, to be honest!” Madison said.

Madison and her 6-year-old Morgan/Thoroughbred gelding, Rouge et Blanc DF, conquered their move up to Training level in 2014, finishing outside of the top 10 only once in the Training Three Day at Rebecca Farm.

Bred by Earl and Jen McFall’s Dragonfire Farm, Rouge et Blanc DF or “Roger” had just completed his first Training level event with Jen when Madison came to try him. “We’d just lost my first horse, and when I tried Roger, it was an instant connection,” she said. She brought him home in 2013 and competed at Novice to start, bringing home a hat trick’s worth of wins before moving up.

Training with Gary Mittleider in her home state of Idaho, Madison has NAJYRC in her sights for 2016. “I’d love to do a one-star this fall, and then target the one-star at NAJYRC in 2016,” she said. “After that, I don’t see anything limiting him from continuing to move up. I really want to see how far we can go together.”

Madison is looking forward to working with Matt Brown. Her week of training begins on January 19, and she’s gearing up to absorb all the knowledge Matt has to offer.

“He’s been really accommodating and pleasant to work with, and I’m just really excited to have this opportunity,” she said. “He’s been such a big name with his success at Rebecca Farm and at other events in 2014, so it’s a big honor to be able to work with him.”

We wish Madison the best of luck with her training and 2015 season. Stay tuned for profiles on the other scholarship winners. Many thanks to Triple Crown Nutrition, PRO and World Equestrian Brands for sponsoring this great educational opportunity for the next generation of our sport.